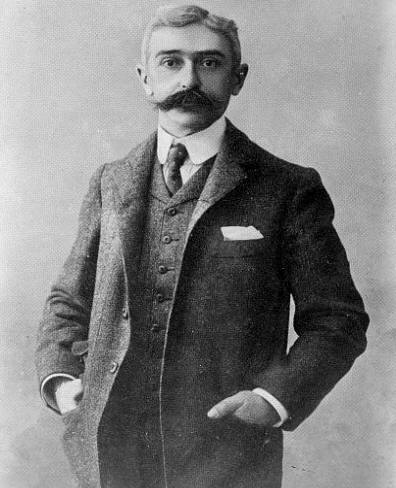 Pierre de Coubertin is widely recognised as the founder of the modern Olympic Games and the International Olympic Committee.

Pierre Frédy (later baron Coubertin) was born the fourth and youngest child of Charles Louis Frédy, Baron de Coubertin and Marie–Marcelle Gigault de Crisenoy in Paris, France on 1st January 1863. After attending school he studied Political Science and developed a keen interest in both History and Education. In his spare time he played sports such as rowing, tennis and cycling.

He married Marie Rothan in 1894 and the couple had two children. Both children were disabled and delicate and were a constant source of worry.

In 1883 he had visited England for the first time and learned of the work of Dr. Arnold, headmaster of Rugby school, and was interested and enthused by Arnold’s ideas on the incorporation of sports into school life. In 1889 he embarked on a tour of Canada and America with a view to discovering the methods of education used in schools and colleges in those countries.

In 1890 he visited England again and was introduced to Dr William Penny Brookes, founder of the Much Wenlock games, an Olympic style yearly sporting  competition. He agreed with Brookes’ ideas that sport should be a part of education rather than just a recreational activity.

At around this time excavations around Olympia found artefacts that suggested that ancient Olympia was a prosperous place. Pierre de Coubertin began to dream of a revival of the ancient Olympics and in 1892 he put the proposal to the Paris Sports Society he had founded earlier. Unfortunately the proposal was not well-received.

A group called the International Olympic Committee was formed in 1894 to oversee the arrangements and organisation. Pierre de Coubertin was unanimously elected President of the committee, a position he held for 29 years before retiring.

Pierre de Coubertin was instrumental in establishing many of the Olympic traditions that continue to this day – the five rings, the Olympic flag, the oath and motto. He produced many writings on the subject of sport and education – one of his most famous quotes is “The important thing in the Olympic Games is not winning but taking part. Just as in life, the aim is not to conquer but to struggle well.”

Pierre de Coubertin died of a heart attack in 1937. According to his wishes his heart was buried in Olympia.