The Stuarts – Fire and Fire – Fighting 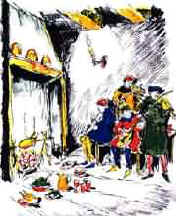 The risk of fire was great in Stuart England. People used candles for light and open fires for cooking. Houses were built close together and were made out of wood. Tradesmen used large ovens and often kept supplies of fuel in their houses and the many inns had stables attached to them filled with hay and straw.

This picture shows a group of musicians. They are sitting next to an open fire, over which their food is cooking. The room is lit by a candle on the wall. The fire place and the roof are made from wood and there seems to be mats on the floor. It is easy to see that this type of house would set fire very quickly.

There were many fires in seventeenth century London. A fire in 1633 destroyed houses on London Bridge and in 1643 another fire caused £2,880 worth of damage. In 1650 seven barrels of gunpowder exploded in a fire in Tower Street that made 41 houses uninhabitable.

People did not have house insurance and if their house was damaged by fire they had to rely on the charity of other people to replace their possessions.

Many Puritans believed that fire was a punishment from God for man’s sinfulness. In the years before 1666, Puritans who criticised Charles II’s love of women and good living predicted that there would be a ‘Great Fire’.

As early as 1200 laws had been passed banning people from thatching their roofs. By 1600 most houses in London did not have thatched roofs.

In 1620 a new order was made that new buildings should be made from brick or stone and that top floors should not jut out into the street.

Suburbs appointed officers who inspected houses for fire hazards and fined owners if they did not remove the hazard.

Householders were instructed to investigate any smell of smoke and raise the alarm if necessary.

At night it was the night-watchman’s job to guard against fire and in hot weather householders were often told to leave buckets of water outside their doors in case of fire.

Much of the equipment used by seventeenth century fire-fighters is very similar to that used today:

These were used to pull down roof tiles or even buildings to prevent the spread of fire.

Made out of leather, these buckets, filled with water, were passed along a chain of people from the water supply to the fire. 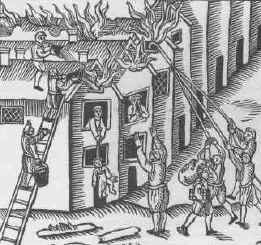 This picture shows fire hooks being used to remove roof tiles. Buckets of water are being passed up a ladder to the men on the roof.

These were used to dig up water pipes which were cut open.

Hand-held water squirts were developed that allowed the fire-fighter to aim the jet of water at the fire.

Fire engines were developed in the seventeenth century and were introduced in large cities from around 1625. These ‘engines’ allowed a force of water to be directed at the heart of the fire. In order for any fire to be put out quickly and easily, a good supply of water was needed. Although the new fire engines had tanks that were filled with water, they were soon emptied. They were refilled with water from the river, passed in buckets along a chain of people from the river to the fire.

An early fire engine. Notice the woman on the left hurrying to the river for another bucket of water.

Although the cities and towns of England in the seventeenth centuries were able to fight and put out fires, it was vital that they reached the fire before it became too big. Failure to stop a fire in its infancy could result in destruction of buildings and lives.