The Stuarts – The Plague Doctor 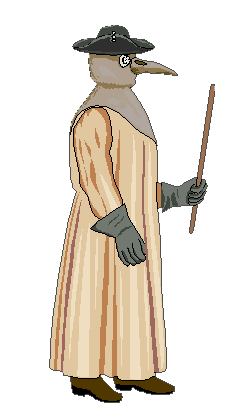 The plague doctor was a common fixture of the medieval world, with his bird-like costume that was believed to resist the plague.

People in the fourteenth century did not know what caused the plague and many believed it was a punishment from God. They did realise that coming into contact with those infected increased the risk of contracting the disease yourself. Cures and preventative measures were not at all effective.

Many doctors, knowing that they could do nothing for plague victims, simply didn’t bother trying to treat the disease. Those that did made sure that they were as protected as possible from the disease by wearing the ‘uniform’ shown above.

The hat was made of leather. It was worn to show that the man was a doctor and also to add extra protection to the head.

The beak that was attached to the mask was stuffed with herbs, perfumes or spices to purify the air that the doctor breathed when he was close to victims.

Glass eyes were built into the mask to make sure that the eyes were fully protected.

The full-length gown was made out of thick material which was then covered with wax. Underneath the gown the doctor would wear leather breeches.

The doctor wore leather gloves to protect his hands from any form of contact with the disease.

The Plague Doctor carried a wooden stick so that he could drive people who came too close to him away.