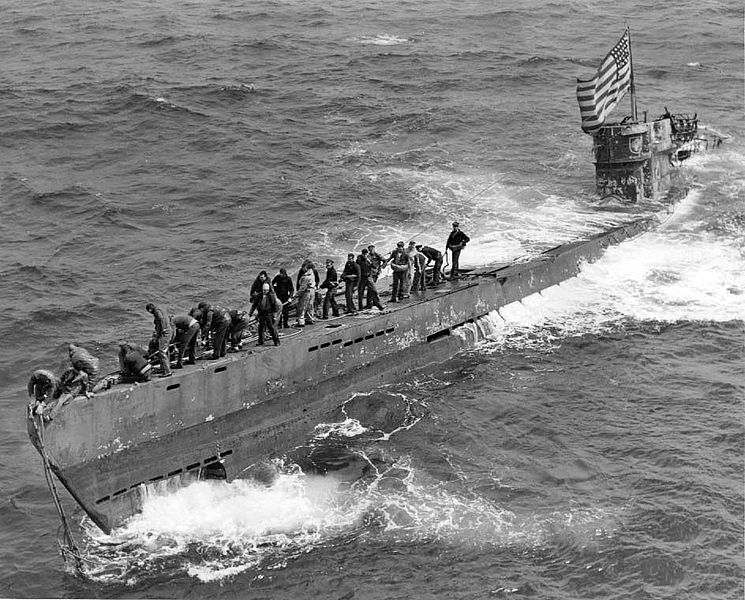 The following article on the U-505 is an excerpt from Barrett Tillman’s book On Wave and Wing: The 100 Year Quest to Perfect the Aircraft Carrier. It is available to order now at Amazon and Barnes & Noble.

In June 1944 USS Guadalcanal’s (CVE-60) hunter-killer group scored a spectacular coup off the African coast. The CVE skipper, Captain Daniel Gallery, was an innovative, outspoken leader who had pioneered night flying from escort carriers. On his third outing, with three kills to his credit, “Cap’n Dan” sought something more. He trained his force to maximize the possibility of capturing a U-boat, and got the chance on June 4. U-505 was depth-charged by destroyer escorts, forced to the surface, and strafed by Avengers and Wildcats. The crew abandoned ship after opening scuttling vents.

Gallery’s boarding team descended into the vacated sub and stopped the flooding. Guadalcanal herself rigged a line and towed the U-boat until a tug arrived. In the meantime, Guadalcanal’s LSO, Lieutenant Jarvis “Stretch” Jennings, became the only “paddles” to wave planes aboard while towing a submarine. U-505 was delivered to Bermuda, a priceless intelligence coup.

Bogue, first of the successful hunter-killers, also logged the last U-boat sunk by CVE planes. On August 20 her Avengers slew U-1229 on its first patrol.

STOPPING THE U-505 WITH HUNTER-KILLERS

Bogue escorted three Atlantic convoys through April 1943 without any submarine contacts. On May 21, while making the run from Britain to Nova Scotia, Composite Squadron Nine (VC-9) encountered U-231. The squadron commander, William M. Drane, executed the attack, damaging the submarine’s bridge and forcing it to return to France to be repaired. The next day, Lieutenant (jg) William F. Chamberlain dropped four depth bombs from his Avenger onto U-569 before it submerged. When the sub had to resurface, Lieutenant Howard Roberts straddled it with his bombs, inflicting mortal damage.

More than 750 German submarines were lost to all causes in World War II. Those sunk by Allied carrier aircraft represented a small share of the whole, but the influence of escort carriers cannot be diminished. Their mere presence deterred innumerable attacks, and carrier planes such as Avengers and Swordfish located hostile subs for surface forces to pursue.

The success of the jeep carriers was proven every time a convoy arrived intact at its destination.

From 1940 through 1945 British carrier-based aircraft sank fifteen Axis submarines (eleven and one-half by Swordfish) and shared thirteen more with surface units. Although the Battle of the Atlantic peaked in May 1943, Fleet Air Arm carrier squadrons, alone and with ships, accounted for just three U-boats that year but sixteen in 1944, including those shared with ships and land-based aircraft. HMS Fencer set the RN record with four U-boats, three in one Arctic convoy during May 1944.

American CVEs were heavily engaged from 1942 onward, with their carrier planes sinking thirty-one enemy subs (one French and one long-ranging Japanese) while splitting four with destroyers. The most successful hunter-killers were Bogue’s (CVE-9) group with twelve confirmed sinkings and Card’s (CVE-11) with eleven. In the Pacific, CVEs notched seven submarines, including two shared with escort vessels.

This article on the U-505 is an excerpt from Barrett Tillman’s book On Wave and Wing: The 100 Year Quest to Perfect the Aircraft Carrier. It is available to order now at Amazon and Barnes & Noble.