USS Enterprise (CVN-65): The Linchpin of the Pacific 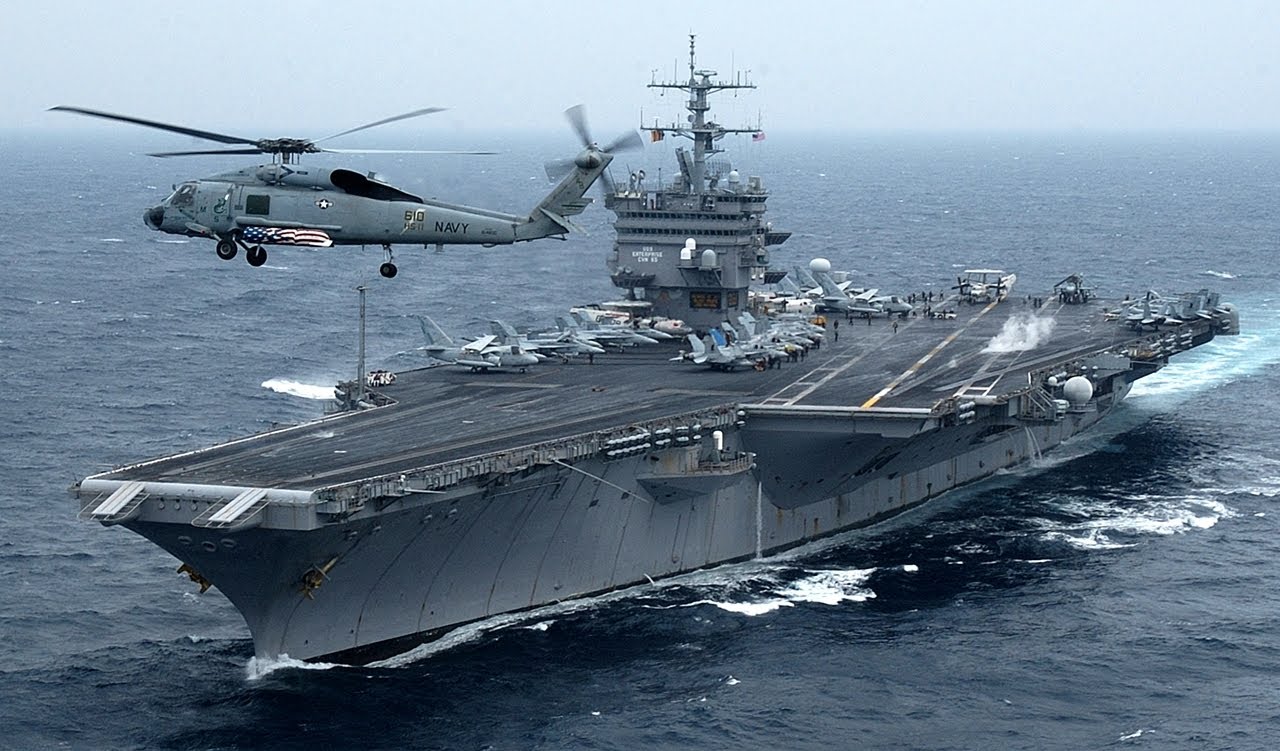 The following article on the USS Enterprise is an excerpt from Barrett Tillman’s book On Wave and Wing: The 100 Year Quest to Perfect the Aircraft Carrier. It is available to order now at Amazon and Barnes & Noble.

From the 1930s to the early 1940s, five carriers joined the U.S. Fleet, including the fifteen thousand-ton Ranger (CV-4) in 1934, America’s first flattop built as such but limited in size by the Washington Naval Treaty. Most notable were the twenty thousand-ton sisters Yorktown(CV-5) and the USS Enterprise (CV-6) in 1937 and 1938, which would prove crucial to America’s war effort in the months after Pearl Harbor.

In the Pearl Harbor attack of December 7, 1941, USS Enterprise  had been spared a pier-side death, delaying its return from a ferry run to Wake Island upon receiving news of the Japanese attack on Pearl Harbor.

Enterprise put up a strong team: thirty-two SBDs, fourteen TBDs, and ten Wildcats. But the launch dragged on while Lieutenant Commander C. Wade McClusky orbited with his Dauntlesses, burning fuel. Finally, he was ordered to “proceed on mission assigned” and led his two squadrons southwesterly, expecting to find Nagumo 155 nautical miles southwest, heading toward Midway. The TBDs and F4Fs proceeded independently, while the Wildcats mistakenly tagged onto Hornet’s Devastators.

McClusky had graduated from Annapolis on June 4, 1926, and possessed considerable experience as a fleet aviator. A fighter pilot, he was new to dive bombers, but he was persistent in hunting Nagumo. When his formation arrived at the expected interception point, he found only sea and sky, and continued on a few minutes more. He reasoned that his prey could not have advanced past the briefed contact point, so he turned northwesterly, paralleling Nagumo’s expected track.

Still finding nothing after twenty more minutes, McClusky finally got a break. He found a Japanese destroyer headed northeast and reckoned it was joining the carriers. Taking his heading from the “tin can,” he proceeded on course until a pale break appeared on the horizon. McClusky raised his binoculars and saw the Japanese striking force.

In a dive bomber’s dream of perfection, the clean blue Dauntlesses—with their perforated dive flaps open at the trailing edges of their wings and their bing bombs tucked close and pointing home, the pilots straining forward, rudder-feet and stick-hands light and delicate, getting it just right as the yellow decks came up, left hands that would reach down and forward to release now resting on the cockpit edge, gunners lying on their backs behind the cocked twin barrels searching for the fighters that did not come—carved a moment out of eternity for man to remember forever.

Several SBDs were chased by vengeful Zeros. One managed to wound McClusky, but he escaped. However, the USS Enterprise lost eighteen of her thirty-two scout bombers, including two out of action aboard Yorktown. “Yorky’s” Max Leslie and his wingman ditched safely, while the rest of his squadron recovered aboard The Big E.

The USS Enterprise at the Battle of the Eastern Solomons

Enterprise came under heavy air attack during the Eastern Solomons battle of August 24, 1942. The action was described by the Big E’s gunnery officer, Lieutenant Commander Elias B. Mott.

We were absolutely unable to see the planes due to the fact that they were so high and small, and that it was late in the afternoon and the sky was considerably bluer than it would have been earlier. . . . About 1712 [5:12 p.m.] the first Jap dive bomber commenced its attack.

One of our forward 20mm gunners opened up on him when he was at 10,000 feet, and this was the signal for the formation. Everybody opened up with five-inch and with automatic weapons. The attack lasted five or six minutes, and during that time they came down one after another starting from the port bow and working around to the starboard quarter. At one time I remember seeing five Japanese dive bombers in line all the way from about 2,000 feet to 12,000. . .

We had the old 1.1 inchers without power drive and about thirty-two 20mm and of course our eight five-inch guns. Five-inch on local control did very well. They hit several planes on the nose . . . and the planes disintegrated. The tremendous number of 20mms that we were able to bring to bear on each plane caused them either to miss or to drop in flames. . . . However, as they worked around toward the stern, where we had little firepower protection, when they came down although we hit them, they were able to take aim and we sustained three hits. One on fiveinch Gun Group Number Three; one on the flight deck aft, which penetrated down three decks; and another one just abaft the island structure on the flight deck. This was an instantaneous bomb. The one that hit Gun Group Number Three wiped out the entire group of thirty-nine men.

My impression of the battle was that if we had a little more firepower, it might have been different. It looked to me that if you had enough guns that the enemy planes would be in trouble, would have to swerve off or . . . the pilot would be killed. However, in a dive-bombing attack, it’s not just a case of getting one plane or ten or even fifteen. You’ve got to get them all, you can’t afford to get hit.

The USS Enterprise at the end of 1942

Unlike Eastern Solomons two months before, Santa Cruz was a clear Japanese tactical victory. But Tokyo’s combined Army and Navy strategy failed to end the Guadalcanal campaign, where the bloodletting continued.

The U.S. Pacific Fleet was left with one fast carrier, the battered Enterprise, which counted forty-four sailors killed and sixteen fliers missing. Her damage control team again demonstrated its expertise, and she was back in action in two weeks.

As PacFleet’s only available big-deck carrier, Enterprise was a priceless asset that season. Air Group Ten cycled in and out of Henderson Field on Guadalcanal during the November crisis, contributing to the ultimate defeat of Japan’s final effort to retrieve the situation. When Tokyo decided to withdraw its remaining troops in February, the vital six-month campaign reached its sanguinary end.

In early 1943 only Saratoga and Enterprise remained available in the Pacific, and Big E was overdue for refit. But help came from an unlikely source: the Royal Navy. Between January and May HMS Victorious had received modifications on the East Coast and at Pearl Harbor to accommodate American aircraft and support equipment. The veteran of the Bismarck hunt and Mediterranean convoys, codenamed “Robin” in Allied message traffic, filled the breach until newgeneration American carriers arrived later that summer.

The USS Enterprise’s  long war ended on May 11, 1945, when a well-flown Kamikaze dived into Enterprise’s deck, blowing much of the elevator 400 feet in the air. With more battle stars than any other ship, she was under repair when the war ended.

This article on the USS Enterprise an excerpt from Barrett Tillman’s book On Wave and Wing: The 100 Year Quest to Perfect the Aircraft Carrier. It is available to order now at Amazon and Barnes & Noble.