The Virginia and Kentucky Resolutions

History » Revolution and Colonies » The Virginia and Kentucky Resolutions 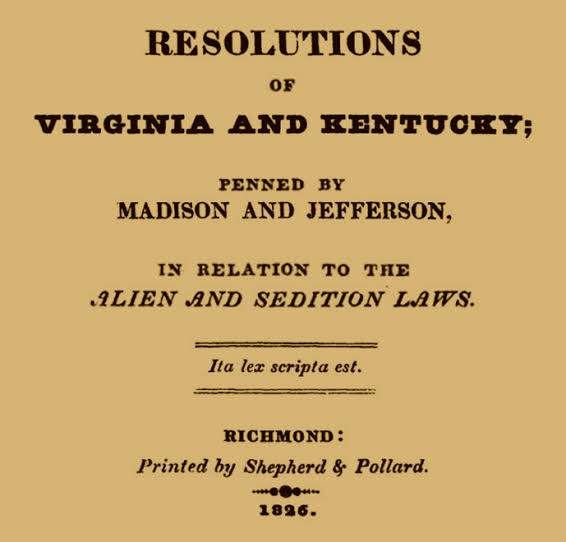 The Virginia and Kentucky Resolutions were political statements drafted in 1798 and 1799, in which the Kentucky and Virginia legislatures took the position that the federal Alien and Sedition Acts were unconstitutional.

The Virginia and Kentucky Resolutions of 1798

Was there a constitutional remedy—a solution short of secession or violent revolution—to oppose such laws as the Alien and Sedition Acts? Figures like Massachusetts senator Daniel Webster and Supreme Court justice Joseph Story (and later Abraham Lincoln) didn’t think so. Since they subscribed to a nationalist theory of the Union—whose core belief was that the Constitution was not a compact among sovereign states but had been adopted by the American people in the aggregate—this appeared to them as an unlawful revolt by an arbitrary portion of the people rather than as an exercise of authority by a sovereign body.

To Jefferson, the only way a state could remain in the Union and retain its liberties in the face of an unconstitutional act by the federal government was for the state to declare that a federal action was null and void and would not be enforced within the state. But this action should be taken by the state only in dire circumstances.

There is, obviously, no provision in the Constitution that explicitly authorizes nullification. That was not Jefferson’s point. Jefferson, and later John C. Calhoun, suggested that no one side in a compact could have the exclusive right of interpreting its terms. This was especially true in the case of the federal compact, since it was Calhoun’s contention that the federal government was not a party to the compact, since it was itself established by the joint action of the states.

Jefferson (who was vice president at the time) anonymously penned what became known as the Kentucky Resolutions of 1798. They spelled out the objectionable aspects of the Alien and Sedition Acts as well as the states’ rightful response: nullification. (No state actually nullified these acts; the crisis with France came to an end, and the acts were slated to expire in early 1801.) James Madison penned similar resolutions that were approved by the Virginia legislature.

The following year the Kentucky legislature passed another resolution, this time including the word “nullification”:

Resolved . . . That, if those who administer the General Government be permitted to transgress the limits fixed by that compact, by a total disregard to the special delegations of power therein contained… That the several States who formed that instrument being sovereign and independent, have the unquestionable right to judge of the infraction; and that a Nullification by those sovereignties, of all unauthorized acts done under color of that instrument is the rightful remedy…

Madison penned his own Virginia Resolutions, which likewise warned of federal encroachments and reminded the population that the state governments had the responsibility to protect them from unconstitutional measures at the federal level.