War in the Pacific: American Naval Strategy in WW2 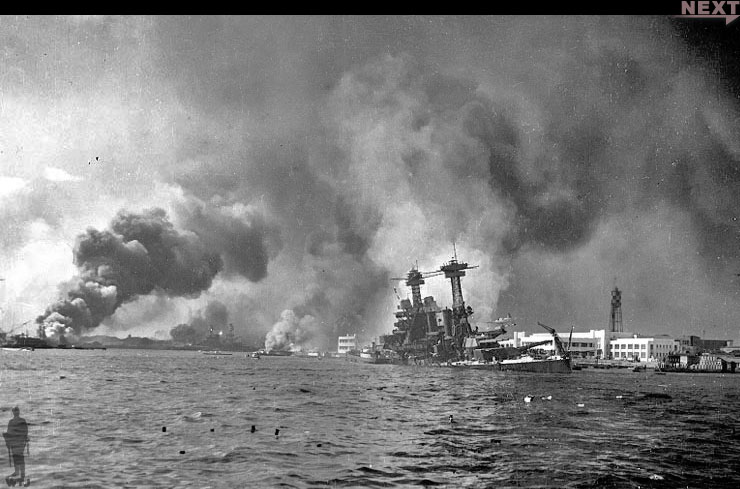 The following article on war in the Pacific during World War Two is an excerpt from Barrett Tillman’s book On Wave and Wing: The 100 Year Quest to Perfect the Aircraft Carrier. It is available to order now at Amazon and Barnes & Noble.

In December 1941 the Imperial Japanese Navy alone combined ships, aircraft, and doctrine in a unified package that would burst on the global scene in a stunning display of naval airpower. America and the U.S. Navy would have to shake off the shock of that blow, adjust to a new reality, and take the war to the enemy.

Only tailhook aviators could do so.

At the end of 1941, the world carrier census stood at twenty-nine. America had eight, including USS Long Island (AVG/CVE-1). Japan led the field with ten ships, including Hosho on training status. Britain deployed ten (two CVEs), and France’s Béarn lay idle. Japan had over a thousand front-line aircraft; the United States merely 668. The war in the Pacific would be fought on the sea and in the air, and the Allies were woefully behind in the race.

In vivid contrast, the global battleship census hung around sixty, including decommissioned and damaged ships, mainly French and Russian. But the ratio was about to turn.

The Pacific Ocean covers some sixty-four million square miles, more than twice the size of the Atlantic and containing nearly half the earth’s water. The 2,400 statute miles from San Francisco to Honolulu is 50 percent farther than the direct line from Paris to Moscow. The expanse from Hawaii to Tokyo is nearly three times farther still, making the Pacific the largest combat arena in history and war in the Pacific occupying the largest battlefield.

The oceanic chessboard was defined by squares composed of lines of longitude and latitude. On that strategic surface, aircraft carriers became the leading players—technically marvelous queens with range, mobility, and striking power. In the forty-four months between December 1941 and September 1945, the United States, Britain, and Japan committed immense resources to the naval contest, with the AngloAmericans dividing their flattops between the Atlantic and Pacific. But the huge majority of carriers of all types were produced in American shipyards. Including escort carriers delivered to Britain, the United States accounted for 71 percent of the world total from 1939 through 1945.

But before the enormous U.S. industrial base could take effect, the sudden war in the Pacific forced its chilling reality upon a marginally prepared fleet.

WAR IN THE PACIFIC: THE LEARNING CURVE

Heavy reliance upon aircraft carriers made 1942 a salient year in the history of naval warfare. The emergence of carrier versus carrier battles—four clashes in six months—was unlike anything previous. Whereas steel-hulled, big-gun battleships had slugged it out for decades, and submarines were well proven in the Great War, flattops were new arrivals.

Tokyo possessed two advantages: first, Kido Butai’s sophistication of operational technique and doctrine was unprecedented; and Japan had geography in its favor. In the fall of 1941, the Imperial Navy owned nine carriers while the U.S. Pacific Fleet had three, and Britain’s lone carrier proved irrelevant. Thus, Franklin Roosevelt’s two-ocean navy had to split its forces, with three carriers committed to the Pacific and four in the Atlantic. That ratio was about to change.

Following the stunning blow at Pearl Harbor, the U.S. Pacific Fleet found itself on the strategic defensive, literally overnight. With the battleships sunk or sidelined, Admiral Chester Nimitz had few options for taking offensive action. In fact, he had only one offensive weapon for the war in the pacific: aircraft carriers.

USS Enterprise (CV-6) had been spared a pier-side death on December 7, delaying its return from a ferry run to Wake Island upon receiving news of the Japanese attack on Pearl Harbor. Lexington (CV-2) also was at sea that morning, and Saratoga (CV-3) was embarking planes in San Diego. But three flight decks were wholly insufficient to counter Kido Butai. Therefore, Yorktown (CV-5) hastened from the East Coast to bolster PacFleet’s lineup. Of the other carriers, Ranger was inadequate for Pacific operations and Wasp had Atlantic and Mediterranean commitments. Hornet (CV-8), last of the Yorktowns, was working up on the East Coast.

Meanwhile, Vice Admiral Chuichi Nagumo’s accomplished airmen and sailors embarked on a wide-ranging Pacific tour, sweeping all before them. While land-based Japanese bombers sank the battle cruiser HMS Repulse and battleship Prince of Wales on December 10, imperial troops landed in the Philippines and Malaya, and seized Hong Kong and Singapore.

Nimitz’s carriers could only hit and run. Between February and April they launched strikes against far-flung Japanese garrisons in the Gilberts, Marshalls, and Solomon Islands. But Saratoga was quickly removed from the lineup when she was torpedoed in mid-January. She remained sidelined until early June.

HMS Hermes arrived at Ceylon in mid-February, the only British carrier east of Suez. Her small air group consisted of Fairey Swordfish, the biplane torpedo bombers that had crippled Bismarck nine months previously. But in the Pacific the Swordfish were largely antisubmarine aircraft, possessing limited strike potential.

On April 9 a Japanese scout plane sighted the small force. The British, aware of being seen, directed Hermes back to Trincomalee where she could receive protection from Hawker Hurricanes. But Nagumo was fast off the mark, launching eighty-two Aichi dive bombers (“Vals”) screened by nine Zero fighters from Akagi, Hiryu, and Soryu. (Kaga was laid up for repairs.) Nearly three dozen Vals dived on the two British warships, hitting them with as many as forty bombs in twenty-seven minutes. A dozen land-based Fairey Fulmar two-seat fighters tried to intervene, to little avail. The remaining dive bombers sank three other ships and a corvette, completing a devastating display of competence, for the loss of four bombers. A moderate riposte from the RAF’s Blenheim light bombers missed their targets.

Hermes went down with her captain and 307 men, the first carrier aircraft sunk by an opposing flattop. It was an execution rather than a battle. The first true carrier clash was four weeks away.

War in the Pacific throughout the rest of World War Two

The war in the Pacific continued between Japan (the latter briefly aided by Thailand and to a lesser extent by its Axis allies Germany and Italy) and the Allied powers. It only ended in the atomic bombings of Hiroshima and Nagasaki, along with the Soviet invasion of Manchuria.

Naval power and naval air power played a crucial role in the war in the Pacific in ways not seen before or since in modern warfare.

This article on war in the Pacific is an excerpt from Barrett Tillman’s book On Wave and Wing: The 100 Year Quest to Perfect the Aircraft Carrier. It is available to order now at Amazon and Barnes & Noble.