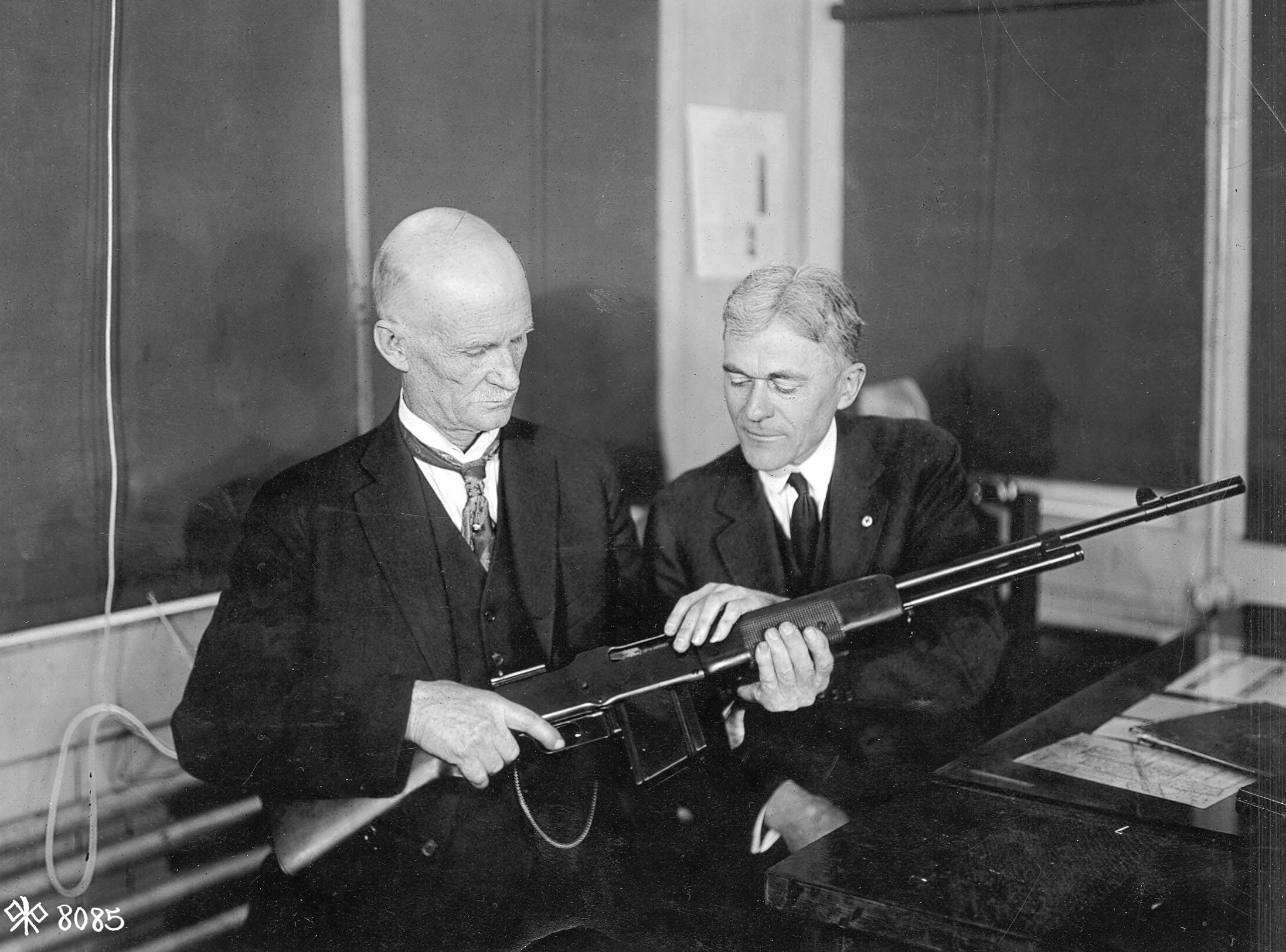 The following article on World War 2 inventions is an excerpt from Barrett Tillman’ D-Day Encyclopedia. It is available for order now from Amazon and Barnes & Noble.

During the four years of the United States’ involvement in the Second World War, a number of World War 2 inventions were introduced that revolutionized warfare. Whether weapons, vessels, aircraft, or even shipping containers, all of these inventions impacted the war and became critical components of the post-war global economy.

Below you will read about the inventors who introduced some of the most important World War 2 inventions to the world.

One of the true geniuses among American inventors, John Moses Browning dominated the firearms field like no individual before or since. His contribution to the success not only of Overlord but of World War II was enormous, though it came between twelve and eighteen years after his death.

Born in Utah of Mormon parents, Browning was raised by a gunsmith who passed along an interest and basic skills in firearms design and repair. John M. and his brothers subsequently built their own steam-powered tools for manufacturing, and young Browning sold his first design in 1878. Over the next fifty years he produced an unprecedented number and variety of innovative concepts: rifles, pistols, shotguns, and automatic weapons.

States during the Second World War—or for that matter, the First World War and Korea. During World War II every significant automatic weapon in the U.S. inventory was a Browning design: the M1917, M1919, and M2 machine guns, the Browning Automatic Rifle, and of course the M1911 semiautomatic pistol.

Thus, he designed five of the ten infantry firearms in the U.S. arsenal (the exceptions were the M1903 and M1 rifles, M1 Thompson, and M3 submachine guns [See Weapons, American]). Additionally, he designed the standard British pistol, the P-35 Browning Highpower (See Weapons, British). For variety, he is also credited with the Winchester Model 97 shotgun, which saw limited military use both in combat and among military police units.

Browning died while working at the FN factory in Herstal, Belgium, during one of his many European trips.

The man who made D-Day—and every other Allied amphibious operation of World War II—possible was a profane, short-tempered entrepreneur named Andrew Jackson Higgins. Born in Nebraska, he grew up in the outdoors and spent much of his youth working in the lumber business.

With outbreak of war in Europe, Higgins astutely anticipated that the United States would require massive quantities of various landing craft, more than the U.S. Navy expected. He established his boatbuilding firm in 1940, when, according to the company history, the U.S. Navy had just eighteen landing craft. Higgins mastered the techniques of forming wood into waterproof surfaces, then purchased vast quantities of oak, pine, and mahogany before America entered the war to ensure that his firm had enough material on hand to meet the future need. Subsequently he set up four high-speed assembly lines in New Orleans.

Rare for the time, Higgins Industries had a fully integrated labor force of some twenty thousand men and women, black and white, working at peak capacity. At one point his factories produced seven hundred landing craft per month.

Throughout the war Higgins delivered 20,094 landing craft of three main types: the prototype LCP, followed by the larger LCVP and LCM (See Landing Craft). The factory not only provided the critically needed small craft but taught members of the U.S. Navy, Marine Corps, and Coast Guard how to use them. Higgins’s firm also built the hulls for PT boats, which were similarly constructed.

Gen. Dwight Eisenhower was lavish in his praise of Higgins’s contribution to victory, saying, ‘‘He is the one who won the war for us. If he had not developed and produced those landing craft, we never could have gone in over an open beach. We would have had to change the entire strategy of the war.’’

Higgins was awarded a posthumous Congressional Gold Medal half a century after the war.

The Todt Organization was responsible for constructing the Atlantic Wall, a process far from completion when Dr. Fritz Todt died. Todt was an early member of the Nazi Party, having joined in 1922. When Hitler became prime minister in 1933, Todt’s party connections and engineering qualifications gained him the contract to build Germany’s showcase, the Autobahn system of modern highways, then unlike anything else on earth. (Ironically, Nazi political maneuvering delayed the program before Hitler assumed power.) With Hermann Göering as interior minister, Todt was appointed to oversee the nation’s entire construction industry—a responsibility that only expanded when the war brought other nations under control of the Nazi Reich. Todt’s energy and ability thereafter were acknowledged with appointment as armaments minister as well. Arguably, Fritz Todt ranked only behind Hitler, Göering, and Heinrich Himmler as the most influential individual of the Third Reich.

Recognizing the need to defend the newly won territory in Western Europe, Hitler directed the Todt Organization to plan and begin building the Atlantic Wall. However, on 8 April 1942 Todt was killed in a plane crash following a conference at Hitler’s headquarters near Rastenburg, East Prussia. He was replaced by Albert Speer, who proved at least as adept in administering Nazi Germany’s wartime industry.

One of the men most responsible for the success of Overlord was the least appreciated. Henry Kaiser, of Canajoharie, New York, became one of the industrial giants of the Second World War, turning his previous construction experience to good use in maritime affairs.

Reared in a poor New York family, Kaiser ended his formal education at age thirteen, when he sought employment. Immensely vigorous, he spent sixteen years building roads and railroads in the United States, Canada, and Cuba between 1914 and 1930. Undoubtedly his most notable achievement in that period was in Cuba, building a new road through three hundred miles of swamps and forbidding terrain. His demonstrated success in that field led to his appointment as chief executive of the Six Companies, Inc., which built Boulder and Parker Dams.

In 1942 Kaiser gained control of four West Coast shipyards, feeling that he could improve construction techniques and thereby offset mounting Allied losses in the Battle of the Atlantic. He was enormously successful, as his leadership and management led to huge increases in commissioning transport vessels (Liberty ships) and escort aircraft carriers. Spurning traditional techniques, Kaiser instigated modular ship construction rather than laying down keels. The time savings in prefabricated hulls proved enormous, and just one of Kaiser’s yards, in Vancouver, Washington, averaged one ‘‘jeep carrier’’ a week for the twelve months between 1943 and 1944.

The availability of millions of tons of merchant shipping, plus escort carriers to defeat the U-boats, were vital factors in preparing for D-Day.

Drawn to aviation, Kaiser became president of Brewster Aeronautical Corporation in 1943. The company had a poor record of producing Corsair fighters for the U.S. and British navies, and not even Kaiser’s managerial skills could prevent cancelation of the contract. Undaunted, he pressed ahead with other favorite projects, including charity work. President Franklin Roosevelt asked Kaiser to head the United Nations War Relief Drive in 1945 and ’46, providing clothing to displaced persons in war zones.

This article on World War 2 inventions is from the book D-Day Encyclopedia, © 2014 by Barrett Tillman. Please use this data for any reference citations. To order this book, please visit its online sales page at Amazon or Barnes & Noble.