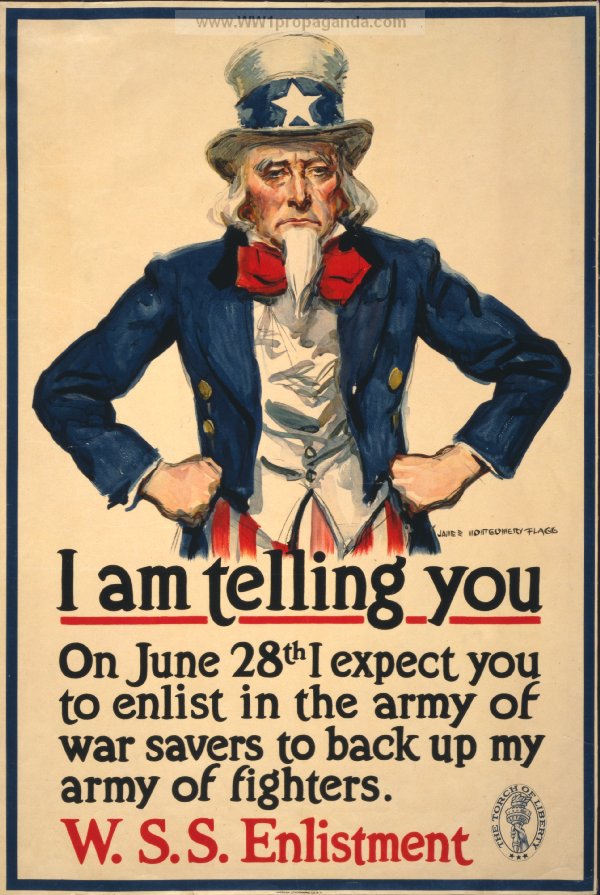 Until the advent of the Cold War in the 1950s, America traditionally maintained a relatively small standing army.  Whenever war broke out, it was necessary for the country to mobilize—to recruit (and sometimes draft) troops, to train them, and to produce the arms, equipment, and supplies needed to fight.  In other words, the US needed bodies, money, and time.  When Congress and the President declared war on Germany in April, mobilization took on extreme urgency.  The government’s overarching task was to persuade Americans to invest in the war, both financially and emotionally.  The financial contributions would be made by purchasing war bonds—loans to the federal government to be repaid at some future date, with modest interest.  The emotional investment meant believing in the cause and demonstrating that belief through volunteer service (men for the military, women for the nurse corps), displays of patriotism, and through shared sacrifice.  To accomplish this feat, the U.S. government in 1917 felt compelled to promote a singular patriotic message, and to stifle any opposing message.  The latter was done through new laws that put constitutionally questionable limits on free expression, and is discussed in another next section.  The former—putting out a singular patriotic message, was done primarily through new government organizations, especially the Committee on Public Information, and the U.S. Food Administration.

President Wilson created the Committee on Public Information, an organization that became, under the direction of a journalist named George Creel, unlike any before conceived in warfare.  Wilson’s choice of Creel was made in part on a letter Creel had written the President in which he expressed his opinion about an ongoing internal debate in Washington: how much censorship to impose on the media.  Creel was against censorship, other than what the newspapers would impose on themselves after they had been convinced of the need for it.  He expressed a desire for “unparalleled openness”.  Paradoxically, however, he was strictly against the publication of anything he considered to be enemy propaganda.  No “lies” of any kind would be allowed, no lies to deceive the enemy peoples, or to negatively impact the public’s opinion about the war.  Creel saw in his selective openness an opportunity to create, in his own words, “a publicity proposition, a vast enterprise in salesmanship, the world’s greatest adventure in advertising.” Wilson sent for Creel and put him in charge of the whole censorship-propaganda question.

George Creel was by all accounts a man of two faces.  In private, he was personable, funny, and gregarious, one of the best story-tellers of his day, a truly likeable personality.  In public, however, Creel was something of a berserker.  His public speeches were so bellicose and bitter that once he was said to have been shocked to read in the newspaper the next day what he had said.  Though outspoken and tactless, even his critics had to admit that Creel had energy and imagination. Congress authorized a budget of $1,250,000, but Creel was also heavily subsidized by the Wilson’s “President’s fund”.  With near limitless cash at his disposal, Creel soon cranked up a massive propaganda machine.

Since the Great War took place before electronic mass media (which started with radio only a few years after the war), Creel relied heavily on visual forms of media.  Posters were especially effective.  An army of artists “rallied to the colors,” as Creel put it, and were put to work under the “Division of Pictorial Publicity”.  Artists such as James Montgomery Flagg, Charles Dana Gibson, Harrison Fisher, and Joseph Pennell churned out patriotic works that even today are artistically stunning.  (The patriotic efforts of artists were also evident on the huge catalog of songs published by private music companies during the war in the form of sheet music).  Flagg’s iconic Uncle Sam “I Want You” poster remains today one of the most recognized patriotic images in America.

Creel also mobilized America’s advertising industry, including newspapers, magazines, and public advertising. Creel’s campaign was calculated to reach anyone who could understand a picture.  And they were everywhere—on billboards, the walls of subway stations, the sides of barns, anywhere an American might travel.  Creel referred to his ad campaign as the “battle of the fences.”  Creel also made effective use of the presses.  Millions of pro-war, pro-Wilson leaflets, pamphlets, and propaganda booklets found their way into American homes, often written by historians and college professors.

Creel’s use of visuals extended to photographic media.  He organized a motion picture division and created propaganda films with titles like, “Pershing’s Crusaders,” “America’s Answer,” and “Under Four Flags.”  Hollywood took up the cause and was soon producing its own propaganda, and some of the biggest stars of the silent era promoted the Liberty Loan drives at huge public rallies. Creel expanded into still images and eventually sent thousands of photographs to newspapers and companies that made stereoview cards.

In an era when audiences still highly prized public oratorical skills, Creel created an army of 75,000 “four-minute” men (presumably an allusion to the minutemen of the American revolution), who delivered hundreds of patriotic speeches.  Initially, these speakers performed at the new mass media phenomenon of the movie theater, where a still slide was shown on the curtain announcing the performance.  Soon the service was expanded to reach audiences at lodge meetings, union halls, grange-meetings, churches, Sunday schools, synagogues, even lumber camps.  Native American reservations, according to Creel, provided some of the most receptive audiences.  The 4-minute men speeches often focused on a specific need.  In the spring of 1917, When the bill to create the military draft was in jeopardy, the minute men focused their energies on “Universal Service by Selective Draft”.  At other times it was the Red Cross, the Farm and Garden initiative, Food Conservation, and selling Liberty Bonds.  Once, Treasury Secretary McAdoo had President Wilson buy a $50 bond, and then Creel sent the 4-minute men around the country to challenge each American to match it.  According to Creel’s own statistics, the 4-minute men delivered 7,555,190 speeches to a total audience of 314,454,514.  Given that the total population of the country was around 103,000,000, each American heard an average of 3 speeches during the 19-month war effort.

Creel also marshaled the country’s musical talent.  He personally prepared a list of songs designed to incite patriotism, and appointed a corps of band-leaders to take charge of motion picture theater orchestras (which, during the era of silent film, often played the film’s score “live” with each viewing of the film) and audiences.  Finally, recognizing the need to promote the war effort as an Allied cause, Creel enlisted public speakers from France and England, including war heroes, to tour the country and give speeches to their American brethren.

And Creel’s propaganda did not end at ocean’s shore.  His apparatus reached out to encompass all of Europe in what some of his subordinates called “selling America to the World.”  He did so by inundating the continent with the speeches and ideas of his boss, President Woodrow Wilson.  He specifically targeted the German people, overcoming efforts by the Kaiser to restrict the flow of ideas coming out of America.

By the end of the war 150,000 workers were engaged in Creel’s formidable “enterprise in salesmanship”.   Was all of this propaganda effective?  To answer the question, consider the words of Secretary of War Newton Baker. Speaking in retrospect after the war, Baker described the overall effect of the Committee on Public Information as “mobilizing the mind of the world.”

During the war years 1914-1917, private American organizations engaged in a variety of humanitarian missions.  A former engineer and mining executive named Herbert Hoover organized the return of 120,000 Americans from Europe and provided steamship tickets, food, clothing, and cash.  Hoover then chaired the Commission for Relief in Belgium; its goal to feed the entire war-ravished nation for the duration of the war.  From there Hoover went to London, where he administered the distribution 2.5 million tons of foodstuffs to 9 million war victims.  He even crossed the North Sea 40 times to personally meet with Germans to persuade them to allow the food shipments.

When the United States entered the war, Hoover was the logical choice to head the newly created U.S. Food Administration, whose main function was to feed the armies of the United States and her allies.  To this end, Hoovers’s agency used patriotic propaganda to reduce food consumption in the United States.  “Food Will Win The War,” Hoover proclaimed. The themes of shared sacrifice and the responsibility of citizenship encouraged every American, adult and child, to “do your bit.” Hoover’s directions were numerous and often very specific. Posters and advertisements promoted foregoing sugar, eating everything on your plate, growing “victory gardens” in the backyard, and observing “wheatless Mondays, meatless Tuesdays, porkless Thursdays and Saturdays, (likewise, the Fuel Administration exhorted Americans to save energy with “heatless Mondays,””lightless nights,” and “gasless Sundays”), and the use of “Victory Bread,” which used more of the wheat-grain than ordinary white bread .  At various times Hoover used his authority to forbid the killing of hens for more than two months, and to lift the meatless order for 30 days. He proposed a limit of two pounds of meat per person per week. On October 12, 1917, he published twelve rules for public eating establishments, including: no bread until after the first course, only one kind of meat, no sugar bowl, only two pounds of sugar for every ninety meals served. The public carried out Hoover’s directions with serious, patriotic enthusiasm. However, that didn’t stop humorists from poking fun at the restrictions. Life magazine punned, “Do not permit your child to take a bite or two from an apple and throw the rest away; nowadays even children must be taught to be patriotic to the core.” In January 1918, Life printed a parody of Hoover’s restaurant rules in the form of what called a “bread and butter letter” (a word of thanks to your host):

I cannot thank you for your bread,
Because there wasn’t any,
Nor any butter, either, though,
Its substitutes were many.
But your pecan and fig croquettes;
Your muffins, flour-and eggless;
Your beef-steak, raised in a window-box;
Your mock duck, wing- and legless;
Your near-fish, wheedled from oat-meal;
your butterine, from apple;
Your catnip salad; dressed with lard;
Your porkless, parsnip scrapple
Composed a menu so conserved
That Mr. Hoover’d better
Commend my cheer in sending you
This meatless, wheatless letter

Later that year, Life published a humorous cartoon called, “suspecting of having more than his share of prunes,” in which a cadre of police search a workingman’s home. Also in 1918, a music publishing company printed a song by Clarence Gaskel, who had previously had several war hits, including “That’s a Mother’s Liberty Loan.” In “I Thank You Mister Hoover, That’s the Best Day of the Year,” the narrator lists all of the days in which he has so go without something–meat, wheat, light, and heat. Sunday, it seems, is the day his wife visits relatives in the country. This “wifeless” day is the best day of his year.

Despite these humorous criticisms, Hoover’s voluntary approach worked. Farm production increased by twenty-five percent, and food exports to the Allies tripled. Without this contribution, the Allies could not have fought on and won the war.