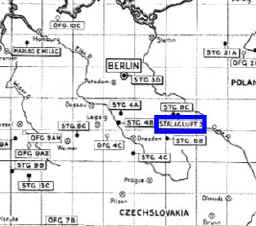 The Great Escape, as it came to be known, was a mass escape attempt from the prisoner of war camp Stalag Luft III located near the Polish town of Zagan.

The purpose-built camp was opened in April 1942 and the Germans considered it to be practically escape-proof. Prisoners were fairly well treated and the Geneva Convention of 1929 regarding treatment of Prisoners of War was followed. 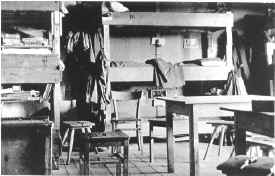 Housing and recreational facilities were considered to be better than those at many other German prisoner of war camps. The picture (right) shows the inside of one of the barracks at Stalag Luft III.

The camp housed mainly British and American airmen whose planes had crashed on Axis territory. The Germans generally captured prisoners with the words ‘For you the war is over.’ However, it was the sworn duty of all captured military personnel to continue to fight the enemy by surviving, communicating information and escaping. Many of the prisoners at Sagan were re-captured escapees. The Germans believed that security at the new camp was so tight that it would be impossible for anyone to escape.

It was realised early on that for any escape attempt to succeed it had to be well planned and organised. The Prisoners at Sagan therefore established an escape committee. Chief escape officer was Squadron Leader Roger Bushell, a former escapee who had been recaptured several times. He was known as ‘Big X’.

The committee decided to build three tunnels and the plan was to effect the escape of at least 200 prisoners. The tunnels were given the code names ‘Tom’, ‘Dick’ and ‘Harry’. There were two main problems to be considered – How to get rid of the dirt that was dug away and how to prevent the tunnels from collapsing. 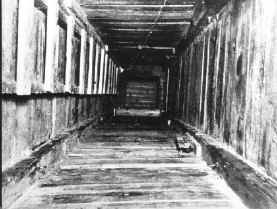 In order to prevent the tunnels from collapsing they had to be shored up with wood. The prisoners used bed boards for this task and as the tunnels grew longer and more wood was needed many prisoners found themselves sleeping uncomfortably on beds with little support. Some even converted their beds to hammocks. The picture (right) shows how the bed boards were used.

Getting rid of the dirt from the tunnels was problematic because the earth removed was a different colour to the earth around the camp. One method used was to construct long bags which could be filled with earth then hidden in the trouser legs. A cord around the neck would open the bags thus releasing the earth on a patch of ground that was being dug or cultivated by another prisoner. Those dispersing the dirt in this way were know as ‘Penguins’. More than 100 tons of earth was disposed of in this way. Another method involved filling empty Red Cross boxes, placing the boxes in the middle of a group of men who would then gradually bury the earth.

Other important members of the Escape Committee were the forgers who made maps and forged papers and the tailors who made civilian clothes out of blankets and other materials that were scrounged and altered uniforms. The picture (left) shows a jacket that was used by an escapee.

The discovery of ‘Tom’ was a major blow to the escape committee and all tunneling had to be suspended for a time to avoid further detection. Eventually ‘Harry’ was completed and the night of the Great Escape was planned for 24th March 1944, a moonless night. Lots were drawn for the 200 places and maps, papers and disguises were completed.

On the night itself all allotted escapees took up positions in hut 104. It was planned that the escapees would leave the camp in stages. Everyone was very nervous and tense, a situation that was made worse by the discovery that the tunnel was around 10 feet short of the woods. This meant that the tunnel exit was on the path of a perimeter guard. By the time that a decision was made on how to signal when the coast was clear, it was around 10pm. Further delays were caused by some men panicking in the tunnel.

By 4am it was clear that it would be impossible for all 200 men to escape and the decision was made to close the tunnel at 5am. At around 4.45am a shot was heard at the tunnel exit. The tunnel had been discovered.

76 men had escaped through the tunnel. Of the remainder, those that were found waiting their turn in hut 104 were sent to the cooler – the camp name for the solitary confinement cells.

Of the 76 men who escaped, 3 made it home to the UK. 23 were recaptured and sent back to Sagan. Hitler personally ordered the execution of the other 50 men.

The commandant of Stalag Luft III, Lindeiner, was court-martialed by the Gestapo for not preventing the escape.

Morale among the prisoners was low when the executions became common knowledge and few were keen to attempt further escape attempts.

Although only 3 men managed to reach safety and 50 men were murdered, the escape caused havoc among the Germans. Thousands of police, Hitler Youth members and soldiers were diverted from wartime duties to search for the escapees.

Urns containing the ashes of the 50 who were executed were brought to the camp. British airmen constructed the memorial (below) to commemorate their deaths. 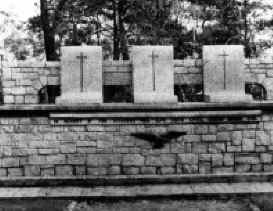