Free from Slavery: African Americans in the Civil War 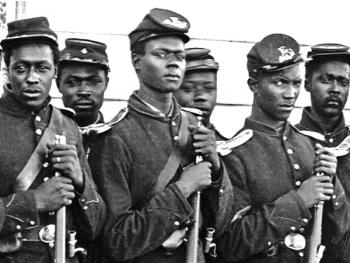 In his January 1, 1863, Emancipation Proclamation, Lincoln permanently freed all slaves in all areas then in rebellion against the United States. Often overlooked is an additional provision in that proclamation by which Lincoln specifically authorized the use of freed slaves in Union military service: “And I further declare and make known, that such persons [declared to be free] of suitable condition, will be received into the armed service of the United States to garrison forts, positions, stations, and other places, and to man vessels of all sorts in said service.” Thus, the way was formally cleared for the blacks’ direct participation in the war, the African Americans in the Civil War.

A step in that direction was taken with the March 25, 1863, War Department issuance of orders to Brigadier General Lorenzo Thomas, the Army’s adjutant general, to proceed to Grant’s theater and confer with him about maximum use of the black fugitives. That use was to extend to “Labors incident to military operations, and also in performing the duties of soldiers under proper organization.” Thomas went to Grant’s theater in the early stages of Grant’s Vicksburg Campaign, visited twelve camps with Chaplain Eaton, and explained to the troops that the use of blacks as Union soldiers was a mandatory Army policy. Ultimately seventy thousand black soldiers were recruited for the United States Colored Troops (USCT) in the Mississippi Valley Theater.

African Americans in the Civil War

On August 1, 1863, Lincoln praised Major General David Hunter for his use of black soldiers in Florida. The president noted that Confederates were attacking them fiercely and cautioned, “It is important to the enemy that such a force shall not take shape, and grow, and thrive, in the South; and in precisely the same proportion, it is important to us that it shall. Hence the utmost caution and vigilance is necessary on our part.”

But it was in his Mississippi Valley Theater that Grant proved to be the most dedicated and effective military supporter of Lincoln’s emancipation and black soldier policies, the African Americans in the Civil War. In an August 1863 letter to Washburne, Grant demonstrated the strength of his conversion to this position. He admitted that he had never been an abolitionist or even anti-slavery but that it had become “patent to my mind early in the rebellion that the North & South could never live at peace with each other except as one nation, and that without Slavery. . . . I would not, therefore, be willing to see any settlemen[t] until this question is forever settled.”