Aktion T4: The Grotesque “Mercy” Of The Nazis 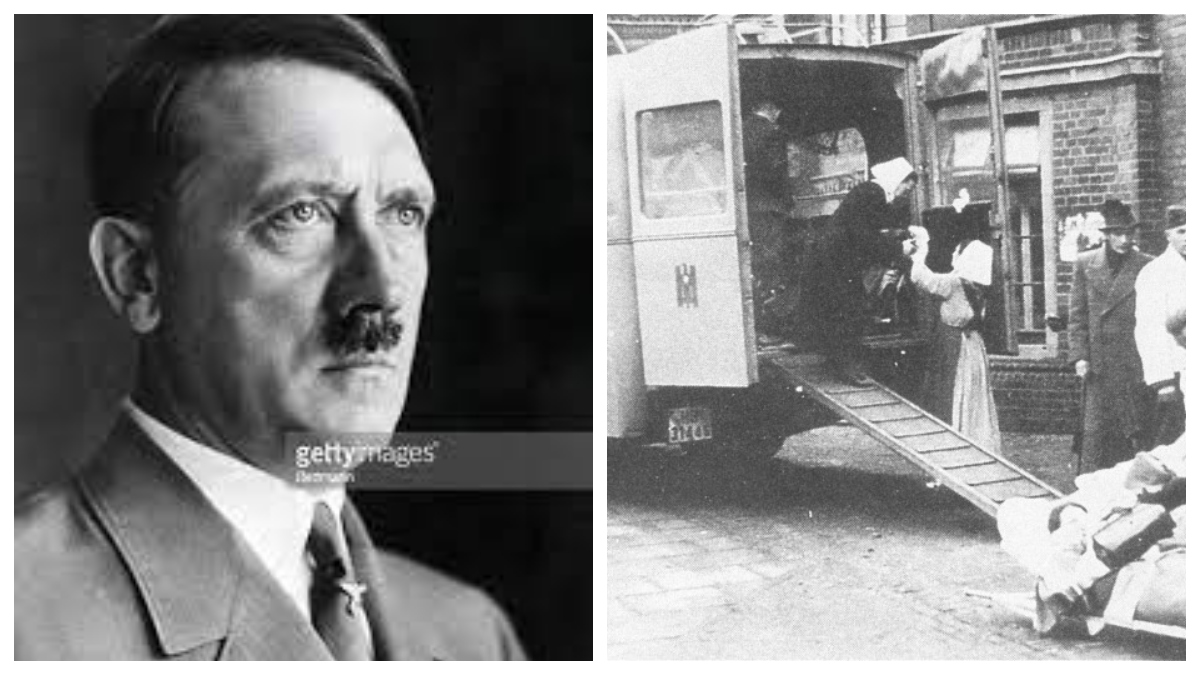 “Aktion T4” might not be as ubiquitous in the annals of history as, for instance, Kristallnacht or the “Night Of the Long Knives“, but its horror should not be forgotten.

“Aktion T4”, also known historically as the “T4 Euthanasia Program”, was a concerted, concentrated, and deliberate effort on the part of the Nazis to see to the extirpation of those that were deemed by the Fuhrer as undesirable.

This government-mandated bloodletting began in 1939 when Hitler wrote and signed what would become known as the “euthanasia note”. This would give authority to his personal physician Karl Brandt and Chancellery chief (Reichsleiter) Philipp Bouhler to select patients that they “deemed incurably sick, after most critical medical examination”, and administer to them what would be historically, euphemistically, and ludicrously known as the “merciful death“. 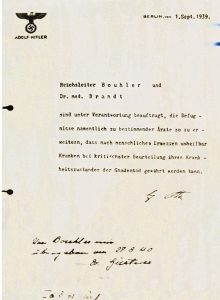 According to Brittanica.com, within a few months, the T4 Program—named for the Chancellery offices that directed it from the Berlin address Tiergartenstrasse 4—involved virtually the entire German psychiatric community. A new bureaucracy, headed by physicians, was established with a mandate to kill anyone deemed to have a “life unworthy of living.” These would include the infirm, or anyone who didn’t fit the narrow and opaque definition of what it meant to be a “good german” or to otherwise betray german identity.

Some physicians active in the study of eugenics, who saw Nazism as “applied biology,” enthusiastically endorsed this program. However, the criteria for inclusion in this program were not exclusively genetic, nor were they necessarily based on infirmity. An important criterion was economic. Nazi officials assigned people to this program largely based on their economic productivity. The Nazis referred to the program’s victims as “burdensome lives” and “useless eaters.”

In the German Reich, the planning of and preparations for the covertly executed “euthanasia” measures probably only began in spring 1939. Two programs can be differentiated:
1. In the context of child euthanasia physically and/or mentally handicapped infants and small children until the age of three that were not cared for in hospitals yet were registered. The children were committed to “children’s wards for expert care“, where they were observed, selected, and killed.
2.  Aktion T4“ – which was named after the address of the operational center in Tiergartenstraße 4, Berlin – was set up to register, select and exterminate psychiatric patients who were institutionalized in mental hospitals and intended for the murder with carbon monoxide gas in specially established killing centers.
Both programs, “child-euthanasia” and “Aktion T4”, were organized in the Kanzlei des Führers (Chancellory of the Führer or KdF), an agency headed by Philipp Bouhler and directly subordinated to Hitler, in cooperation with the Reich’s Interior Ministry.

The method of this state-sanctioned genocide was unforgivably cold and calculated. For one point of contact in the horrifying context of children, it is stated by Historyplace.com that midwives and doctors were required to register children up to age three who showed symptoms of mental [handicap], physical deformity, or other symptoms included on a questionnaire from the Reich Health Ministry.

A decision on whether to allow the child to live was then made by three medical experts solely on the basis of the questionnaire, without any examination and without reading any medical records.

Each expert placed a + mark in red pencil or – mark in blue pencil under the term “treatment” on a special form. A red plus mark meant a decision to kill the child. A blue minus sign meant a decision against killing. Three plus symbols resulted in a euthanasia warrant being issued and the transfer of the child to a ‘Children’s Specialty Department’ for death by injection or gradual starvation.

The program’s directors ordered a survey of all psychiatric institutions, hospitals, and homes for chronically ill patients. At Tiergartenstrasse 4, medical experts reviewed forms sent by institutions throughout Germany but did not examine patients or read their medical records. Nevertheless, they had the power to decide life or death.

The methods that were used were vile. At first, personally felt that starvation and lethal injection were the most effective means of this state-sanctioned murder. It was later decided that death via asphyxiation by poison gas was preferred.

Program administrators established gas chambers at six killing centres in Germany and Austria: Hartheim, Sonnenstein, Grafeneck, Bernburg, Hadamar, and Brandenburg. The SS  staff in charge of the transports donned white coats to keep up the charade of a medical procedure. Program staff informed victims’ families of the transfer to the killing centers. Visits, however, were not possible. The relatives then received condolence letters, falsified death certificates signed by physicians, and urns containing ashes.

There are a few holes of light torn into the fabric of this tapestry of despair. One of the heroes of this story would take the form of a cleric named Clemens August Graf von Galen.

Galen was made a bishop in Munster in 1933 and he staunchly (and loudly) opposed the practices of the Nazi party. He grounded the axioms of his repudiation fundamentally in his religious doctrine. So, it was on August 3, 1941, he delivered a wonderful sermon which condemned in the most withering terms, the “mercy” murders:

The first batch of innocent folk have left Marienthal under sentence of death….And so we must await the news that these wretched defenceless patients will sooner or later lose their lives. Why? Not because they have committed crimes worthy of death….

It is simply because that according to some doctor, or because of the decision of some committee, they have no longer a right to live because they are “unproductive citizens.”…

Once [we] admit the right to kill unproductive persons…then none of us can be sure of his life. We shall be at the mercy of any committee that can put a man on the list of unproductives. There will be no police protection, no court to avenge the murder and inflict punishment upon the murderer.…

A curse on men and on the German people if we break the holy commandment “Thou shalt not kill” which was given us by God on Mount Sinai with thunder and lightning, and which God our Maker imprinted on the human conscience from the beginning of time! Woe to us German people if we not only licence this heinous offence but allow it to be committed with impunity!

In fact, the underlay of violence that permeated Aktion T4 took on various forms and permutations, not the least of which was the genocide of the handicapped that would take place in death camps. In fact, many of the physicians that enacted the horrors o the “merciful” deaths would later find themselves as agents of torture within the death camps.

The total number killed under the T4 Program, including this covert phase, may have reached 200,000 or more. The official conclusion of the T4 Program in 1941 also coincided with the escalation of the Holocaust, the culmination of Nazi programs to eliminate those deemed an embarrassment to the “master race.”

According to SciencePo.com, American and German courts immediately after the war arrived at unequivocal judgments when proposing their jurisdictional evaluation of National Socialist “euthanasia” crimes: They saw them as murders of innocent people and as crimes against humanity. Accordingly and to give an example, in the “euthanasia” trial in Dresden in 1947 the deputy director and medical head of the “T4” central office, Hermann Paul Nitsche, and other physicians and nurses from Saxony were sentenced to death and executed.

Yet beginning 1948-49, the medical perpetrators could count on surprisingly mild verdicts especially as regards the western German jurisdiction. They were partly excused with reference to the high-standing ethical problem of euthanasia. Furthermore, the perpetrators could call on the mistake of law or the collision of duties as reasons to be exempted from guilt which then led to their acquittal. Although the “destruction of life unworthy of life“ was illegal, the physicians were thought to have been incapable of recognizing the unlawfulness of their deeds or it was assumed that they had stayed in charge of their office to prevent worse or even to save some of the victims. In many cases, the charges were dropped or investigations were not even taken up.