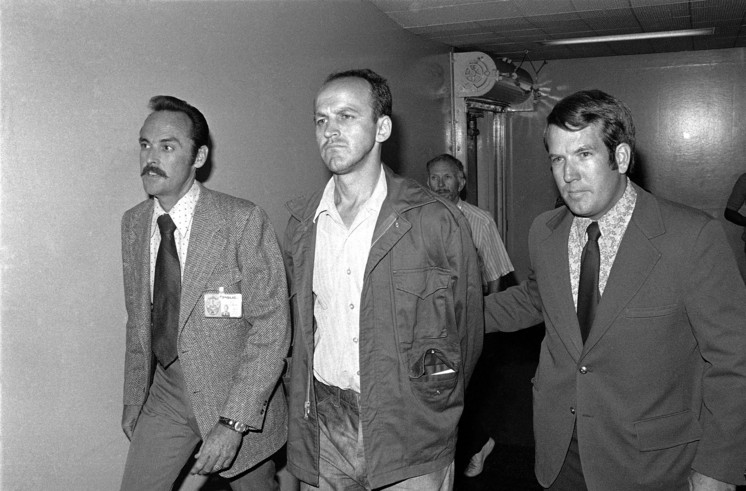 The following article on the Alphabet Bomber is an excerpt from Mel Ayton’s Hunting the President: Threats, Plots, and Assassination Attempts—From FDR to Obama. It is available for order now from Amazon and Barnes & Noble.

Perhaps the most dangerous threatener during the Ford years was a twenty-eight-year-old Yugoslavian immigrant Muharem Kurbegovic. The Secret Service had received information about Kurbegovic’s threats to kill Ford using home-made nerve gas from the CIA. Kurbegovic, who claimed to be “The Messiah,” was one of the most dangerous individuals ever to threaten a president.

After immigrating to the United States in 1967, Kurbegovic moved between various engineering jobs and was considered very bright, an excellent engineer, and a personable coworker. He also had numerous conversations with coworkers about bomb construction and related matters, including one in which he asked about undertaking an extortion scheme that involved setting off a bomb, then demanding $10 million in exchange for not setting off a second.

On August 6, 1974, Kurbegovic set off a bomb in a locker in the overseas lobby at Los Angeles International Airport. More than three hundred people were packed into the lobby, many of them in the check-in line for a 9:00 a.m. flight to Hawaii. Three people were killed instantly, and thirty-six people were wounded, fourteen of them seriously. One victim had his right leg blown off.

Kurbegovic left a tape-recorded message directing police to an even larger bomb hidden in a locker in the Greyhound bus station. The depot was evacuated, and police removed one of the largest bombs in the history of Los Angeles. Kurbegovic was named “the Alphabet Bomber” because of his scheme to explode bombs at locations alphabetically to spell out Aliens of America, his imaginary terrorist group, “until our name has been written on the face of this nation with blood.” The bomber had chosen the Greyhound depot because the letter “L” in the word “locker” was the second letter in “Aliens of America.” The first bomb was placed at the airport because the letter “A” in the word “airport” was the first letter in “Aliens of America.”

The Alphabet Bomber Unleashes His Plan

Kurbegovic was simultaneously making phone calls and planting tape-recorded messages that claimed credit for other crimes and demanded changes in U.S. immigration laws. Referring to himself as “Rasim,” Kurbegovic called himself a “field commander in the Symbionese Liberation Army (SLA).” The SLA was the group that kidnapped heiress Patty Hearst earlier that year. One of the tapes The Alphabet Bomber sent claimed that deadly nerve gas concealed under postage stamps had been mailed to each U.S. Supreme Court justice.

Various witnesses tied Kurbegivic to both bombings, and by August 20, 1974, he was a suspect. The Alphabet Bomber was arrested, and police found books on arson, explosives, and germ and chemical warfare, as well as other evidence in his apartment linking him to the bombings.

Police also discovered that Kurbegovic had assembled most of the materials for a Serin nerve gas bomb. “He was that close,” Los Angeles detective Arleigh McCree, head of the Los Angeles Police Department bomb squad, said.

Although the Secret Service denied the agency had a record of Kurbegovic having threatened Ford, a 1987 Board of Prison Terms hearing for Kurbegovic was informed he had a history of “making threats against several public officials,” and two Secret Service agents watched the proceedings.

Additionally, senior LAPD detective Arleigh McCree, who led the Los Angeles police’s bomb squad and headed the investigation of the “alphabet bombings,” said the Secret Service told him at the time that Kurbegovic had made a threat on the president.

Although he was never charged with threatening the president (prosecutors believed they had a stronger case against him on the other charges), Kurbegovic was convicted in 1980 on twenty-five counts of murder, arson, illegal use of explosives, and related charges and sentenced to life in prison. From prison, the Alphabet Bomber continued to threaten American presidents.

This article on the Alphabet Bomber is from Mel Ayton’s Hunting the President: Threats, Plots, and Assassination Attempts—From FDR to Obama.. Please use this data for any reference citations. To order this book, please visit its online sales page at Amazon or Barnes & Noble.