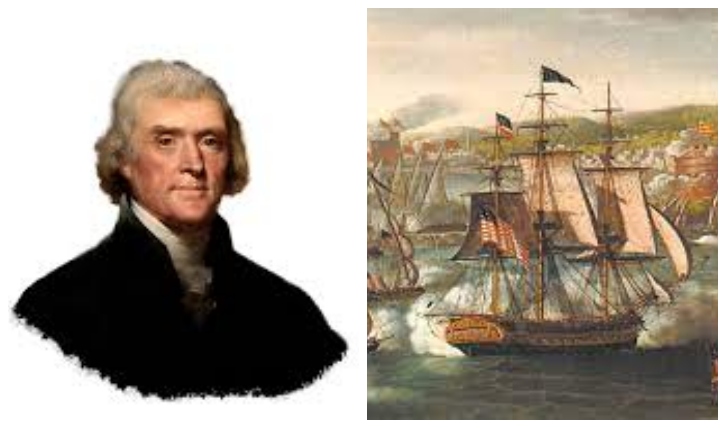 There were three salient courses of nation-building that Thomas Jefferson saw to completion during his Presidency.

Two of them are rather infamous: they comprise, of course, the Louisiana Purchase and the Lewis and Clark expedition to the West.

The third is the oft-forgotten and criminally understudied Barbary Wars.

The Barbary Wars, which holds the unique distinction of being the first war that America fought on foreign soil, was the somewhat inevitable but still revolutionary clash with the member states of Northern Africa’s Ottoman Empire. These are the countries of Morocco, Tunisia (then known as Tunis), Algiers, and Tripoli.

It has been estimated by the historian, Robert Davis, that as many as 1.25 million Europeans were kidnapped and enslaved by this Islamic autocracy on the northwest coast of Africa between the years of 1530 and 1780. The Barbary trade, which was a toxic combination of piracy, ransom, and indeed slavery, haunted much of the world and its force could be felt as far away as Ireland.

Once the American Revolution was on the horizon, it was a general policy among the European capitals to pay a tribute to the Ottoman powers, typically either in exchange for redeemed captives or a greater immunity from future plunder and kidnapping.

This was an arrangement that the young nation of the United States, which had no naval fleet at the time and thus could neither protect its ships nor launch a retaliation, couldn’t agree to.

Needless to say, Jefferson held the current status quo of the Barbary states with great scorn and contempt.

In 1784, the American ship Betsey, with a crew of 10 people and a considerable salt payload, fell victim to Ottoman piracy while en route from Spain to Philadelphia. Soon to follow were the Dauphin and the Maria, both of whom fell victim to the swords of Algerian ships in the Atlantic.

It was then that Secretary of State John Jay beckoned to both Jefferson and Adams in their respective capacities of U.S. Ministers to Paris and London. Jay had intended to send the two on a mission of acquiescence to the empire in the spirit of its European counterparts. Their task was simple enough: they were to borrow large sums of money from Dutch bankers to appease the tribute thrust upon them by the Barbary states.

It was at this time Adams invited Jefferson to London for a private meeting with the envoy of Tripoli, Ambassador Abdrahaman.

Abdrahaman imposed his demands on the new country. Among them were the ever-increasing tariffs for the ransom of hostages, as well as the defining and pricing of what he called “temporary peace” and “perpetual peace”. Abdrahaman also kindly factored in his personal commission for participating in these negotiations.

With no involvement in the Crusades nor of the Spanish-led reconquest of Andalusia, the United States, after all, hadn’t offended the Muslim world in any way throughout its short existence.

Jefferson and Adams asked the Ambassador by what right he makes these demands.

In an address Jefferson later gave to both Jay and Congress, on March 28, 1786, Jefferson wrote the following:

The Ambassador answered us that it was founded on the Laws of their Prophet, that it was written in their Koran, that all nations who should not have acknowledged their authority were sinners, that it was their right and duty to make war upon them wherever they could be found and to make slaves of all they could take as Prisoners, and that every Musselman [Muslim] who should be slain in battle was sure to go to Paradise.

Jefferson had now resolved to not only recommend to the administration that it refuse to pay the tribute but to prepare a naval fleet to make its way to the Mediterranean.

Having established and developed a working relationship with John Paul Jones, the man later regarded as the founder of the United States Navy, Jefferson ordered (without troubling Congress for permission), a naval expedition to the Mediterranean, resulting in the first of two Barbary Wars, beginning in 1801.

It was also during this time that William Eaton led the charge of 8 Marines and 500 mercenaries through the miasma of the war with Tripoli. This was the first time that Marines were landed on foreign soil and thus why the first line of the Marine anthem reads “From the Halls of Montezuma to the Shores of Tripoli.”

In the aftermath of some extremely brave efforts normally associated with figures such as Captain Stephen Decatur, a peace treaty was finally signed in 1805, formally ending hostilities with Tripoli and establishing and cementing the United States as an international force militarily that had never been tested up to that point.