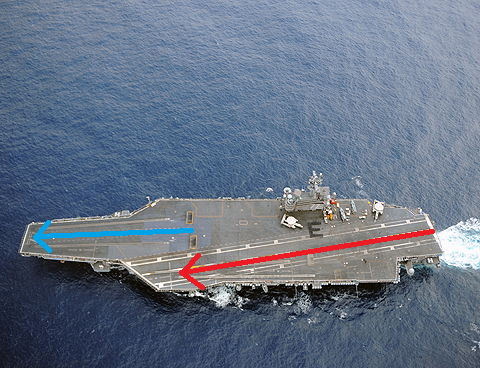 The following article on angled deck aircraft carriers is an excerpt from Barrett Tillman’s book On Wave and Wing: The 100 Year Quest to Perfect the Aircraft Carrier. It is available to order now at Amazon and Barnes & Noble.

Early in the jet era of the 1950s, higher speeds presented a challenge in carrier landings. It was bad enough with straight-wing jets such as Grumman F9F-2 Panthers and F2H Banshees, but when swept-wing fighters entered service with the F9F-6 Cougar and FJ-2 Fury, the situation only worsened. In some quarters, the Navy faced the potential end of high-performance aircraft at sea. Carriers might become little more than antisubmarine platforms.

In early 1949 the Naval Air Test Center at Patuxent River, Maryland, identified three possible solutions: developing a power-on landing technique; replacing the LSO with a glideslope indicator (much like the Japanese Navy’s wartime equipment); or using an angled flight deck. The latter pair in concert proved the solution.

An angled deck solved two problems at once. First, it freed the carrier from having to accommodate high-performance aircraft on a straight deck, with all that entailed. On axial decks, aircraft either “trapped” safely or smashed into the barriers (and possibly into planes parked forward). Captain Wally Schirra, later a three-flight astronaut, described the situation: “In those days you either had an arrested landing or a major accident.”

Secondly, on an angled deck, in the event of a waveoff or a “bolter” (failure of the tailhook to snag a wire) the pilot added power and went around for another approach. Flight deck operations could continue without interruption.

The Royal Navy attributed the angled deck concept to Captain Dennis R. F. Campbell and Mr. Lewis Boddington of the Royal Aircraft Establishment. The test platform was HMS Triumph, with an angled outline painted on the ship’s axial deck in 1952. Pilots made touch-andgo passes at the imitation angle, aligned five and a half degrees to port. That same year the Americans duplicated the tests with a far larger ship, USS Midway (CV-41), with similar encouraging results.

The limited offset on existing flight decks cramped available space for other purposes—taxiing, parking, and servicing. Therefore, British and American engineers expanded the angle to eight degrees, thanks in part to the influence of Commander Eric Brown, the foremost RN test pilot during an exchange tour at Patuxent (“Pax”) River.

In early 1952, after experimenting with power-on and power-off approaches to a dummy deck, test pilots from Pax River adjourned to Midway and Wasp (CV-18), flying angled approaches in the Douglas F3D Skyknight, Grumman F9F Panther, and McDonnell F2H Banshee jets, plus a piston-driven AD Skyraider. The consensus favored a power-on approach to touchdown and the trap, so the Navy Bureau of Aeronautics approved a million-dollar conversion of USS Antietam (CV-36) with suitable modifications at the Brooklyn Navy Yard. The portside aircraft elevator was fixed in the “up” position, and the vacant space aft received an extension tapering to the fantail. A landing area seventy-five feet wide was marked on the deck, canted eight degrees port, and six arresting wires were installed to match the angle. The conversion was completed in December 1952.

Preliminary testing by Patuxent River pilots included 272 day and twenty-one night touch-and-go landings, followed by seventy-eight day and five night landings in four types of jets and four prop types. The path was clear for a carrier air group to determine the feasibility for fleet aviators. Air Group Eight (“CAG-8”), recently formed at Norfolk, Virginia, under Commander Robert B. Wood with only a handful of experienced pilots, would determine how well “nugget” aviators could manage the angled deck with as little as fifty hours of jet time.

Antietam left for Cuban waters in mid-January 1953. There were some in-flight engagements with the hook snagging a wire before the plane’s wheels reached the deck, and one pilot sustained a back injury. But overall the least experienced pilots had little difficulty making repeated landings on the angled deck, and Wood’s confidence grew to the point that several pilots became night qualified with four traps each.

Based on the Cuban cruise, Antietam tweaked the angled deck. The cant was increased to ten and a half degrees, setting the norm for future generations of carriers.

This article on angled deck aircraft carriers Korean War aircraft is an excerpt from Barrett Tillman’s book On Wave and Wing: The 100 Year Quest to Perfect the Aircraft Carrier. It is available to order now at Amazon and Barnes & Noble.