Author of the Declaration of Independence

History » Founding Fathers » Author of the Declaration of Independence 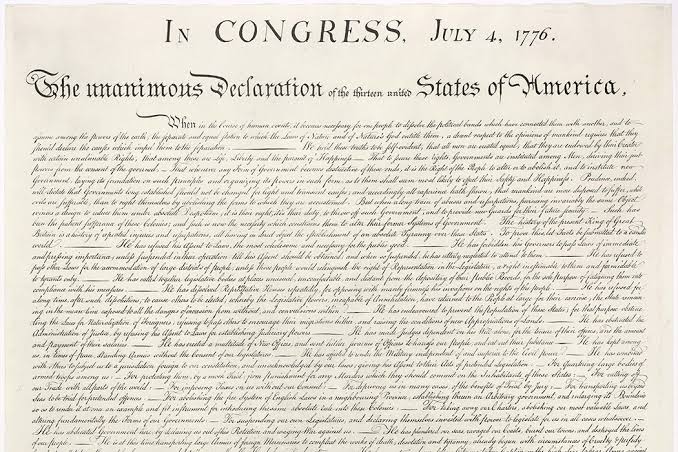 Who is the author of the Declaration of Independence? Thomas Jefferson is universally believed to be the author, but how much input did others have?

Many years later, Jefferson told Henry Lee that he wrote the Declaration “not to find out new principles, or new arguments, never before thought of . . . it was intended to be an expression of the American mind, and to give to that expression the proper tone and spirit called for by the occasion.”

Many historians, including Jefferson’s most important biographer, Dumas Malone, believe Benjamin Franklin changed Jefferson’s draft of “we hold these truths to be sacred and undeniable” to “we hold these truths to be self-evident,” a much more powerful expression. Jefferson himself probably borrowed language from George Mason’s Virginia Declaration of Resolves, written a month before Jefferson authored the Declaration. Mason had argued, similarly to Jefferson, that “all men are by nature equally free and independent, and have certain inherent rights…namely the enjoyment of life and liberty, with the means of acquiring and possessing property, and pursuing and maintaining happiness and safety.” It seems likely that Jefferson simply shortened Mason’s wording. But even that wording was not new. The idea that Englishmen had a right to “life, liberty, and property” went back at least to John Locke and his Two Treatises on Civil Government in 1689, which itself was meant to couch England’s “Glorious Revolution” of 1688 in the rights of English-men, established in 1215 when King John was forced to sign the Magna Charta at Runnymede. These rights were thus common parlance not only in Britain but in America. They were, for instance, part of the Carolina Charter, which Locke may have helped author. Most colonists did not consider themselves to be sole “Americans.” They were British subjects pleading with the king for relief from taxes and laws that violated their “natural” rights as Englishmen. Indeed, Americans were proud to be British. And, why not? Englishmen were the freest and most prosperous people in the world.

Jefferson insisted that the colonists had suffered patiently while the king and Parliament assumed tyrannical rule over the colonies, but only the “present King of Great Britain” deserved the condemnation of the patriot leaders. Jefferson never declared that all kings were unjust, just George III. It is true that Jefferson was not a monarchist, but it is equally true that he thought there were worse things than monarchy. When the French Revolution, of which he was an early proponent, had proven itself to be unmistakably extremist, with the revolutionary government lopping off heads at a rapid pace, Jefferson called for a restoration of the royal family in France. Moreover, contrary to what the historian Joseph Ellis says, Jefferson never suggested that government was an “alien force.” The government, in Jefferson’s words, should protect the “safety and happiness” of the people. Only after a “long train of abuses and usurpations” reduced the people “under absolute Despotism” did the people have the “right” and “duty, to throw off such Government and to provide new Guards for their future security.” They could “alter or abolish” a tyrannical government, but Jefferson did not consider the British system of government per se to be unjust, only the government of King George III. Even conservatives like John Dickinson knew their grievances would not be addressed by a Parliament determined to maintain its sovereignty over the king’s subjects, no matter what the cost. Independence was justified because it was the only way left for the colonists to preserve their inherited rights.