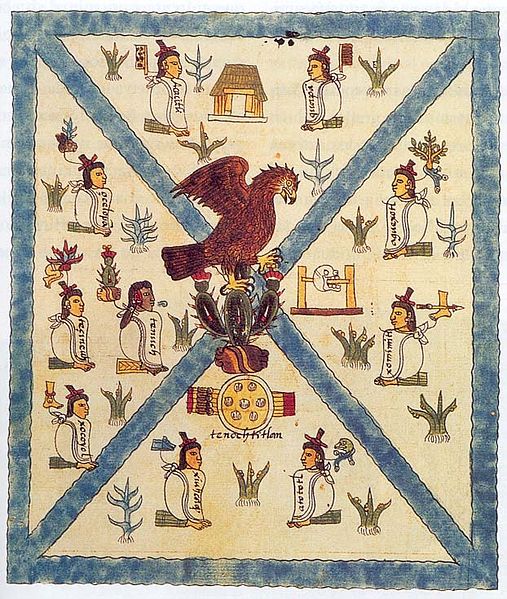 Codex painter was an honored and necessary profession in the Aztec world. They were highly trained in the calmecacs, the advanced schools of the noble class. Some calmecacs invited commoner children to train as scribes if they were highly talented, but most scribes were nobles. After the Spanish conquest, codex painters worked with the priests recording the details of Aztec life. These codices are the richest source of information we have about the Aztecs.

The Aztec Empire, as with many empires, required a great deal of paperwork: keeping track of taxes and tribute paid, recording the events of the year both great and small, genealogies of the ruling class, divinations and prophecies, temple business, lawsuits and court proceedings and property lists with maps, ownership, borders, rivers and fields noted. Merchants needed scribes to keep accounts of all their trades and profits. All of this official work required the scribes of the Aztecs—the codex painters.

The Aztecs didn’t have a writing system as we know it, instead they used pictograms, little pictures that convey meaning to the reader. Pictography combines pictograms and ideograms—graphic symbols or pictures that represent an idea, much like cuneiform or hieroglyphic or Japanese or Chinese characters.

The codices were made of Aztec paper, deer skin or maguey cloth. Strips of these materials up to 13 yards by 7 inches high were cut, and the ends pasted onto thin pieces of wood as the cover. The strip was folded like a concertina or a map. Writing in the form of pictograms covered both sides of the strip.

Only 15 pre-Columbian Mesoamerican codices survive today—none of them Aztec, but from other cultures of about the same time. However, hundreds of colonial-era codices survive—those that carry the art of the tlacuilo (codex painters) but with Nahuatl and Spanish written commentary or description.

The Aztec number system was vigesimal or based on twenty. Numbers up to twenty were represented by dots. A flag represented twenty, which could be repeated as often as needed. One hundred, for instance, was five flags. Four hundred was depicted by the symbol of a feather or fir tree. The next number was eight thousand, shown as a bag of copal incense. With these simple symbols, the Aztecs counted all their tribute and trade. For example, one tribute page might show 15 dots and a feather, followed by a pictogram of a shield, which meant that the province sent 415 shields to the emperor.