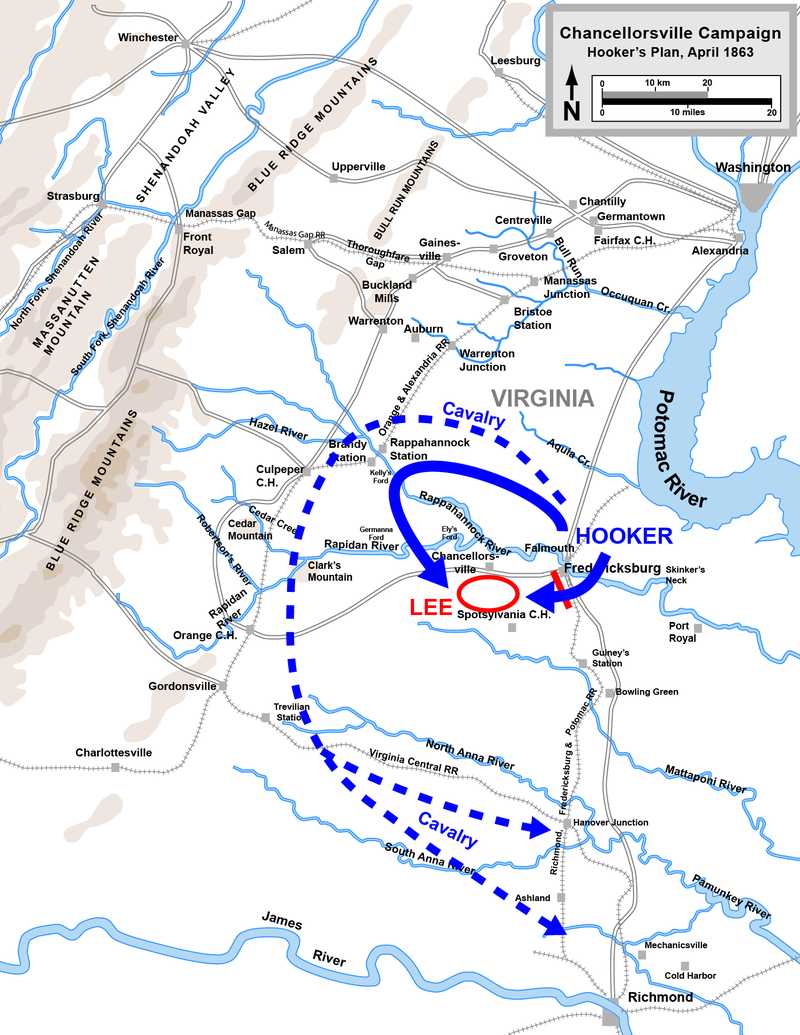 The Background of Battle of Chancellorsville

Background of Battle of Chancellorsville – After the Union disaster at Fredericksburg, President Lincoln replaced Ambrose Burnside as commander of the Army of the Potomac with “Fighting Joe” Hooker. Hooker had a reputation as a hard-drinker. Charles Adams, a Union cavalry officer (and Henry Adams’s son), remarked that Hooker’s headquarters was “a place to which no self-respecting man liked to go, and no decent woman could go. It was a combination barroom and brothel.”20 Like many men who spend their time in barrooms and brothels, Hooker was a braggart. He let it be known: “My plans are perfect, and when I start to carry them out, may God have mercy on General Lee, for I shall have none.”

The Battle of Chancellorsville:

Hooker’s plan was to advance on Fredericksburg, then divide his massive army of 134,000 men, and trap Lee’s much smaller force (60,000) between his two wings (both of which would outnumber Lee), crunching the Confederates in a Union vise. It didn’t work out that way.

The Federals’ maneuver worked well enough initially—it was the Confederate response that was stunning. Lee left a small holding force of 10,000 men at Fredericksburg to hold off about 23,000 Federals. But then, to Hooker’s amazement, the Confederates, far from panicked at the 73,000 Federals forming up behind them, attacked, and drove the bluecoats back. Hooker called for reinforcements and ordered his men to dig entrenchments.

But Hooker was in for another nasty shock. Lee kept a mere 17,000 men to occupy the attention of the dug-in Federals who outnumbered him more than four to one. Meanwhile he sent Stonewall Jackson, with another 26,000 men, on a bold flanking movement against the Union right.

While Hooker imagined he had Lee trapped, it was Hooker who fingered his collar and decided to skedaddle when Jackson’s troopers came roaring into the Federal lines. The Confederates forced both sides of Hooker’s pincer movement back across the Rappahannock River, in a humiliation of the boastful Union commander.

One Union officer confessed: “They have beaten us fairly; beaten us all to pieces; beaten us so easily.” In New York, in the newspaper offices of Horace Greeley, the reaction was worse: “My God, it is horrible—horrible! And to think of it—130,000 magnificent soldiers so cut to pieces by less than 60,000 half-starved ragamuffins!” Worse still was the reaction in Washington. Senator Charles Sumner of Massachusetts exclaimed, “Lost—lost. All is lost!” Lincoln moaned: “My God! My God! What will the country say?”

Battle of Chancellorsville was the greatest Confederate victory of the war, won against the longest odds, but for which the Confederacy paid an enormous price in the death of Stonewall Jackson, Lee’s most trusted and effective lieutenant. In the gloomy dusk, scouting ahead of his lines to see how he could capitalize on his smashing success, Jackson and his staff officers were shot by Confederate troopers who mistook them for a Federal patrol.

The Battle of Chancellorsville is considered Robert E. Lee’s masterpiece.  His reputation as a military genius was sealed by fighting an incredibly successful offensive battle despite being outnumbered 2-to-1 and launching attacks on multiple fronts.

After another humiliating Union defeat at Fredericksburg, On January 26, Lincoln replaced Gen. Ambrose Burnside with Joseph “Fighting Joe” Hooker as the new commander of the Army of the Potomac, with 120,000 troops. Hooker’s plan was to send his cavalry on a raid behind Lee to cut off Lee’s communication with Richmond. He would leave 40,000 troops in front of Lee near Fredericksburg, and Hooker himself would march up the Rappahannock River and try to go around Lee’s left.  If he didn’t defeat Lee at that time, he would at least force Lee to retreat. But Lee managed to achieve victory despite splitting up his forces into vastly inferior numbers and fighting the Union on multiple fronts. The outcome was 17,000 Federal casualties to 13,000 Confederates.

Scroll down to the bottom of this post to see more maps related to this battle.

Outcome of Battle of Chancellorsville 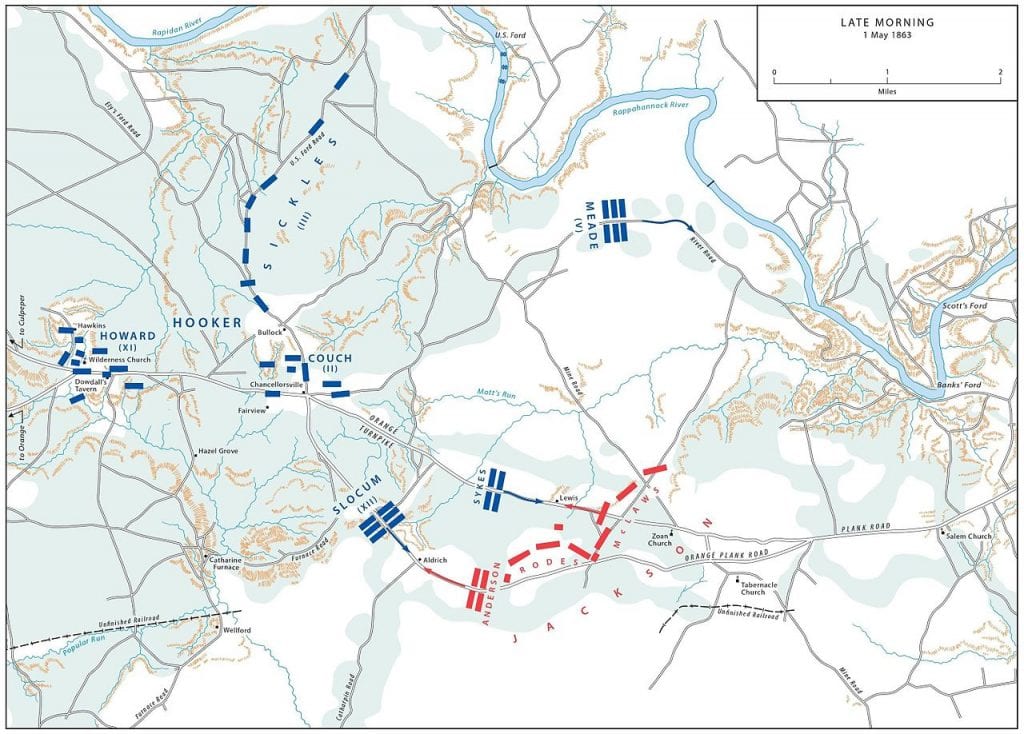 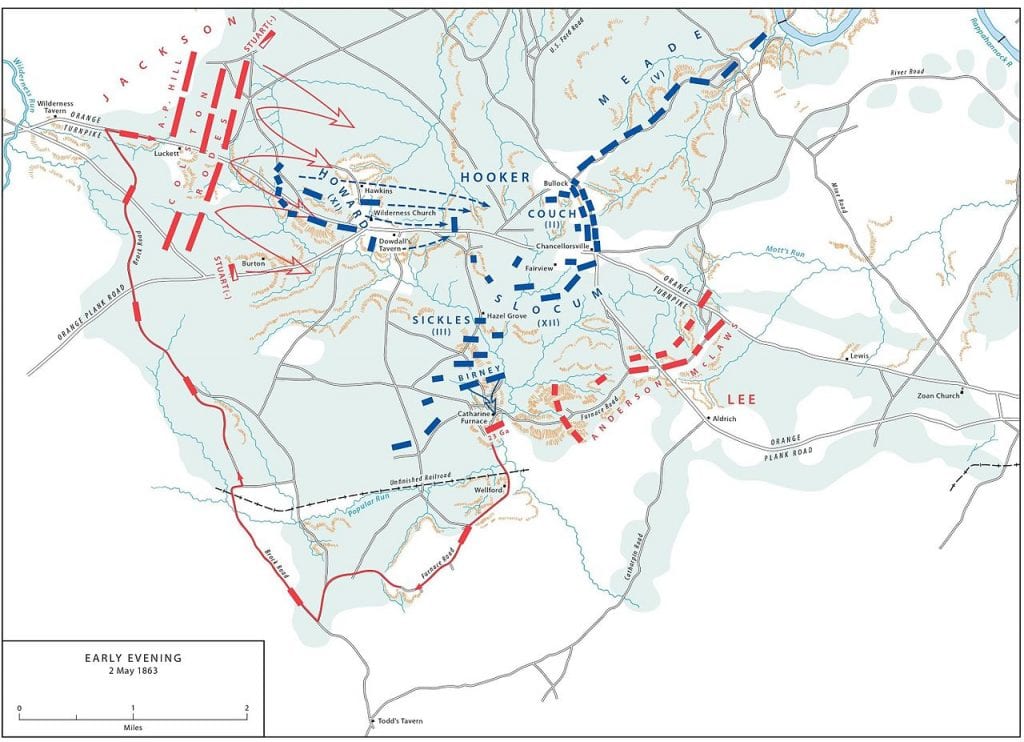 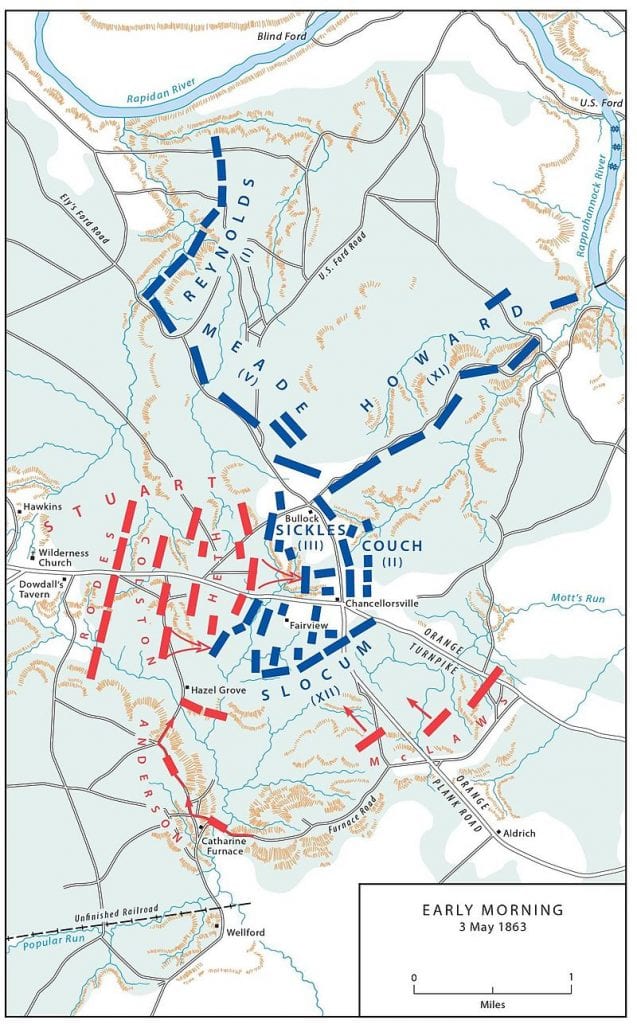 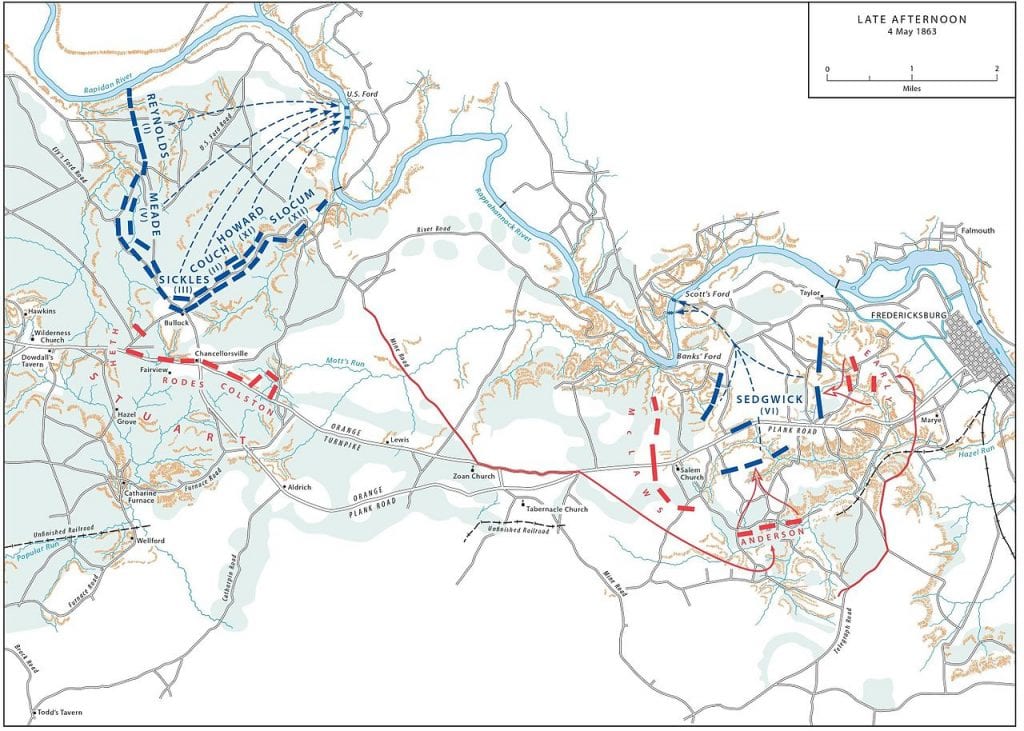