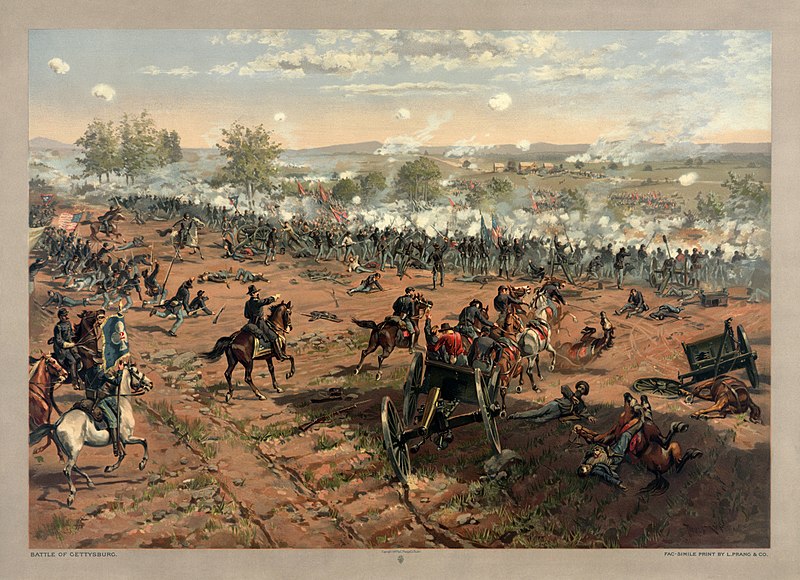 The Background of The Battle of Gettysburg:

History of Battle of Gettysburg-General Robert E. Lee wanted to isolate a Union army and destroy it. That, he believed, was the quickest way to convince the North to allow the Southern Confederacy its freedom. So he marched his men out of warravaged Virginia through Maryland and into Pennsylvania.

The Battle of Gettysburg:

The battle was fought over three days: 1-3 July 1863, with the final troop totals equaling close to 95,000 Federals and 75,000 Confederates. As the initial skirmishes began, almost accidentally, Kentucky-born Union General John Buford, an old Indian fighter, secured the high ground for the Federals.

The Confederates could have won the battle the first day. They pushed the Federals from their advanced positions in front of Gettysburg and along Seminary Ridge. The subsequent Union position—known as the “fish hook”—eventually formed like the base of the letter J at Cemetery Hill and Culp’s Hill, extending straight down Cemetery Ridge to Little Round Top and Big Round on the Union left.

Lee asked General Richard Ewell to attack the base of the fishhook, in order to sweep the Federal line, “if practicable.” Ewell, to Lee’s dismay, didn’t think it was, though Confederate General John B. Gordon knew otherwise: “The whole portion of the Union army in my front was in inextricable confusion and in flight . . . my troops were on the flank and sweeping down the lines. The firing upon my men had almost ceased. Large bodies of the Union troops were throwing down their arms and surrendering . . . .In less than half an hour my troops would have swept up and over those hills . . . .It is not surprising that . . .I should have refused to obey that order [to retreat].”

On the Union side of the line, it had been a lucky escape, but with heavy casualties. I Corps had lost nearly 10,000 men and some units had been virtually annihilated (the 24th Michigan suffered casualties of 80 percent). But arriving at midnight was the Army of the Potomac’s new commander, General George Meade, who inspected his defensive positions and found them solid.

That was one opportunity lost for the Confederate army. Another came on the second day, when Lee’s plan was to “attack the enemy as early in the morning as practicable”25 at the opposite end of the fish hook. The attack was entrusted to General James Longstreet. Longstreet, however, disliked Lee’s plan, preferring, according to his later testimony, to maneuver the Confederate army into a defensive position that would force the Yankees to attack it.

Longstreet delayed the attack until near day’s end, waiting for reinforcements. By that time, Union troops under General Daniel Sickles had advanced, contrary to General Meade’s orders, into an area known as the Peach Orchard, the Wheat Field, and Devil’s Den, smack in front of Longstreet’s long-delayed advance.

Confederate General John Bell Hood, dispatched scouts to see if it was still possible to flank the Union left, as originally planned. The answer was yes, if the Confederates moved their attack around to the hills of Little Round Top, which had no more than a Union observation unit, or unoccupied Big Round Top.

Hood reported this intelligence to Longstreet, but Longstreet refused to alter the plan of attack. He sent his men charging, en échelon, uphill, into spewing Union fire. Still, the Union line began to dissolve, and the Confederate attack spilled over to Little Round Top.

But everywhere else on the center-right of the Union line, furious fighting continued. General William Barksdale, pushing his Mississippians to almost pierce the Union line, was killed. Union General Sickles lost a leg (smashed by a cannon ball), but nonchalantly lit up a cigar as though it were nothing. The 1st Minnesota regiment, rushing to plug a gap in the Union line, sustained 82 percent casualties, but did its duty and held the position. Cemetery Ridge remained in the hands of the bluecoats.

Twice, fate—in the form of reluctant generals—had deprived Lee of the victory he thought was possible at Battle of Gettysburg. On day three, Lee resolved on a daring stratagem.

That night, at the Union council of war, Meade and his officers resolved that they would hold their ground and brace for Lee’s next move. Having attacked the Federals on both flanks, Meade suspected that Lee would attack dead center. Meade was the first general to read Robert E. Lee exactly right.

Lee planned for Ewell to lead a diversionary attack on the Union right while Longstreet made the main attack under cover of the largest artillery barrage ever attempted by the Confederate army. Longstreet, however, wanted to renew his argument from the day before. He wanted either to renew his flanking attack or have the entire army shift to the Union left and establish a defensive line that would compel the Federals to attack.

Lee listened patiently, but rejected Longstreet’s arguments and told him to get his men into position. Longstreet, however, delayed all the morning through the afternoon. Indeed, by the time he got his men moving, the artillery, which had barraged the enemy, was depleted of ammunition.

The Confederates now had the challenge of crossing a mile of open ground with minimal artillery support to suppress federal fire. They did not flinch. The charge would be led by the brigades of General George Pickett. Officers to the front, General Lewis Armistead—whose father had been a general and whose uncle had been the lieutenant-colonel commanding the defense of Fort McHenry in the War of 1812—shoved his black hat over the tip of his sword and waved his men forward. With him were Pickett’s other brigade commanders: James Kemper, a former member of the Virginia House of Delegates whose grandfather had served on George Washington’s staff, and Richard B. Garnett, a West Pointer suffering from a bad knee and worse fever. He advanced on horseback, however obvious a target that made him.

The Confederates marched forward as if on parade, even stopping at one point to adjust and straighten their lines, oblivious to the holes being torn in their ranks by the Union fire. Of Pickett’s Virginians, Brigadier Garnett was shot off his horse, dead. Brigadier Kemper, calling for Armistead’s men to support his brigade, collapsed, shot in the groin.

Armistead waved his men to come on, they were close enough now to the Union line to break into a jog—and they were blasted by canister. But through the storm of smoke, artillery fire, and minié balls, the Union front was suddenly pierced. Chasing a line of retreating Federals was Armistead himself, still waving his black hat on his sword, shouting, “Come on boys! Give them the cold steel! Follow me!” They surged forward into hand-to-hand combat, Armistead and his troopers running straight into two Federal regiments rushing to close the line. Armistead, arm outstretched to a silent Federal cannon, went down, mortally wounded, falling at a point on the battlefield now called “the high tide of the Confederacy.” On another part of the front, the University Greys, made up entirely of students from Ole Miss, managed to plant their colors no more than a yard from the Union line before the devastating Union fire killed every last one of them.

Now it really was over. The Confederate lines wavered and buckled. As one rebel commander said, “The best thing the men can do is get out of this. Let them go.” As the shattered Confederate units drifted back, Lee rode forward to meet them. “All good men must rally. . . .General Pickett. . . your men have done all that men could do; the fault is entirely my own . . . .All this has been my fault—it is I that have lost this fight and you must help me out of it the best way you can.” The Confederate soldiers cheered Lee. They even begged another chance. But Lee waved them down, and prepared them—with a newly revitalized Longsteet—for a counterattack that didn’t come.

Both sides licked deep wounds. The Union army had suffered 23,000 casualties. The statistics were even grimmer for the Confederates. Twenty-eight thousand men were lost, more than a third of Lee’s army, and among them a high proportion of senior officers whose talents and experience could not be replaced. Lee’s officers had sacrificed their lives in the battle they hoped would secure Southern freedom.

Gettysburg and Vicksburg were the turning points of the war. The hopes of the Confederacy would never again rise so high as they did on the battlefield in Pennsylvania.

The 1863 Battle of Gettysburg stopped Robert E. Lee’s second invasion of the North. It was the deadliest battle of the Civil War, with over 50,000 casualties during the three day battle, a scale of suffering never seen before or since in America. The Union won victory and had new life injected into its war effort. The Confederacy saw its best chance at demoralizing the North slip away.

The Strategic Situation in the East May – June 1863

Outcome of Battle of Gettysburg

This article is part of our larger selection of posts about the Civil War. To learn more, click here for our comprehensive guide to the Civil War.