Robert Shaw was serving as a Captain in the 2nd Massachusetts when he was asked to raise and command a regiment of black troops. This was not the first coloured regiment to be formed but it was the first to be organized in a Northern state.

Shaw recruited free blacks, mainly from the Northern New England states and the new regiment was formed on May 13, 1863 with Shaw as its colonel. 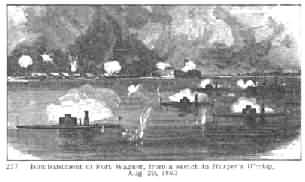 The 54th Massachusetts regiment took part in some small actions during the early part of July before being moved to Morris Island.

On July 18, 1863, the regiment, with two brigades of white troops, led an assault on the Confederate artillery battery, Fort Wagner. The men fought bravely and proved that black soldiers could fight as well as whites. However, the Union army were unable to take the Fort and many of the 54th Massachusetts regiment, including Robert Gould Shaw were killed.