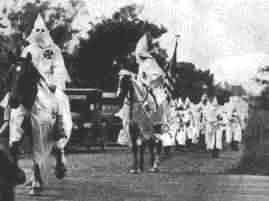 At the end of the American Civil War, slavery was abolished.

Legally the former slaves were free and equal to white people.

The reality was far different.

The Ku Klux Klan was a white underground terrorist group. They would not accept black people as equals.

Members of the Ku Klux Klan dressed in white robes to stress their belief that whites were superior to blacks.

As a result many black people did not register to vote and kept away from white areas. 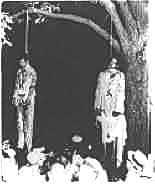 They created a wave of terror which included threats of violence, bullying, lynching, setting fire to buildings and murder, among blacks and those who tried to help them.

Blacks who tried to vote or gain an education were subjected to name calling, bullying and beatings from white people who supported the aims of the Ku Klux Klan.

Black Americans had to face the truth. The war was won, but the battle was not over. They would have to struggle against racial discrimination in order to gain fair and equal treatment.