Black Peoples of America – What is Slavery?

A slave is someone who is owned by another person.

A slave has to do what is asked of him by his master, usually this is work of some kind. Slaves are punished for not following their master’s orders, working too slowly, or attempting to runaway. When we think of slavery today we think of the black Africans who were captured, sold into slavery and taken to the Americas to work on the plantations there.

Slavery, as an institution, has a very long history. Indeed slaves were used to build the pyramids by the ancient Egyptians, by the Romans and by the Ancient Britons. Slavery was abolished in Britain in 1807. 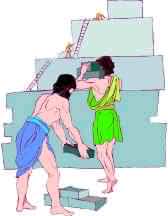 Sadly, slavery is not a thing of the past. In 1999, the International Labour Conference condemned the government of Myanmar (Burma) for their ” ..widespread use of forced labor..” And throughout our modern world, women and young girls are forced into prostitution, while both children and adults work in near slavery conditions in sweat shops producing goods for the western world.