Engines of Destruction: Helepolis, the Massive Siege Engine that Failed 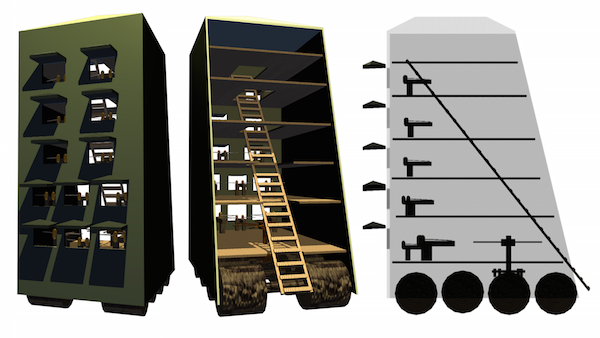 Demetrius I, King of Macedon, invented many siege engines including battering rams and siege towers. For the Siege of Rhodes, he created the Helepolis, the Taker of Cities, a huge armored siege tower containing many heavy catapults.

The island city of Rhodes maintained its neutrality among the warring nations of the time, although it remained friendly to Ptolemy I of Egypt, the enemy of Demetrius of Macedon. Both Demetrius and Ptolemy were former generals of Alexander the Great. Because of Rhodes’ friendship with Ptolemy, Demetrius decided to besiege the city to forestall any closer relationship it might have with Egypt. In order to conquer the highly fortified Rhodes, Demetrius invented the Helepolis.

The Helepolis was a great siege tower, 130 feet tall and 65 feet wide. It sat on eight wheels and casters so it could be moved forward and back and laterally as well. It had multiple stories connected by sturdy stairs, one for ascending and one for descending. Its sides were iron plated for fireproofing, and had portals that opened when the catapults fired. The Helepolis weighed 160 tons and required hundreds of men to move it via the capstan and belt drive and thousands more to push it from behind.

While Alexander’s siege towers at Tyre had ballistas below to pound the walls and catapults above to shower the city’s defenders with rocks, Demetrius’ Helepolis contained a variety of armaments on each of its nine floors. Two 180 pound catapults and one 60 pounder were on the first floor. The catapults were categorized by the weight of the missile it threw. Three 60 pounders were on the second floor and two 30 pounders on each floor above that. The top two floors contained men armed with bows and dart throwers for killing defenders on the city walls. The tower’s ironclad, mechanically-adjusted apertures were lined with animal skins, wool and seaweed to make them fireproof. The Helepolis was the largest siege tower of its time.

The Helepolis wasn’t the only siege engine brought to the fight; in fact, both sides employed a variety of engines, tactics and ploys. The besiegers attempted to mine under the city walls, but were defeated by the defender’s countermines. Once, Demetrius’ forces managed to breach the wall and enter the city, but the defenders were able to kill all the enemy forces and repair the wall. Demetrius attempted to capture the fortified island harbor, but each time the Rhodians successfully drove him off.

When Demetrius brought the Helepolis to bear, the Rhodians knocked a hole through their own wall under cover of night where they expected the Helepolis to attack. They then flooded the entire area with water and sewage so when the massive tower was moved up the next morning it became deeply mired in the mud.

Ultimately, the siege failed and Demetrius left Rhodes, leaving behind all of his siege engines. Years later, the Rhodians sold the remains of those siege engines, including the Helepolis, which earned them enough money to build one of the seven wonders of the ancient world, the Colossus of Rhodes.

The Siege of Rhodes provided an essential lesson for the military minds of the time: high tech, as represented by Demetrius’ Helepolis, can often be defeated by low tech, in this case, mud. This lesson holds true to this day.