The Forgotten Assassin – Sirhan Sirhan and the Killing of Robert F. Kennedy 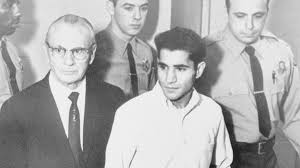 Robert F. Kennedy’s assassination in 1968 seemed like it should have been an open-and-shut case. Many people crowded in the small room at Los Angeles’s famed Ambassador Hotel that fateful night and saw Sirhan Sirhan pull the trigger. Sirhan was also convicted of the crime and still languishes in jail with a life sentence. However, conspiracy theorists have used inconsistencies in the eyewitness testimony and alleged anomalies in the forensic evidence to suggest that Sirhan was only one shooter in a larger conspiracy, a patsy for the real killers, or even a hypnotized assassin who did not know what he was doing (a popular plot in Cold War–era fiction, such as The Manchurian Candidate).

In this episode I speak with Mel Ayton, who profiles Sirhan and argued that his political beliefs and hatred for RFK motivated the killing. Ayton, author of the book The Forgotten Terrorist – Sirhan Sirhan and theAssassination of Robert F Kennedy, examines Sirhan’s extensive personal notebooks, revisits the trial proceedings, and argues Sirhan was in fact the lone assassin whose politically motivated act was a forerunner of present-day terrorism. Overall, we reexamine the assassination that rocked the nation during the turbulent summer of 1968.