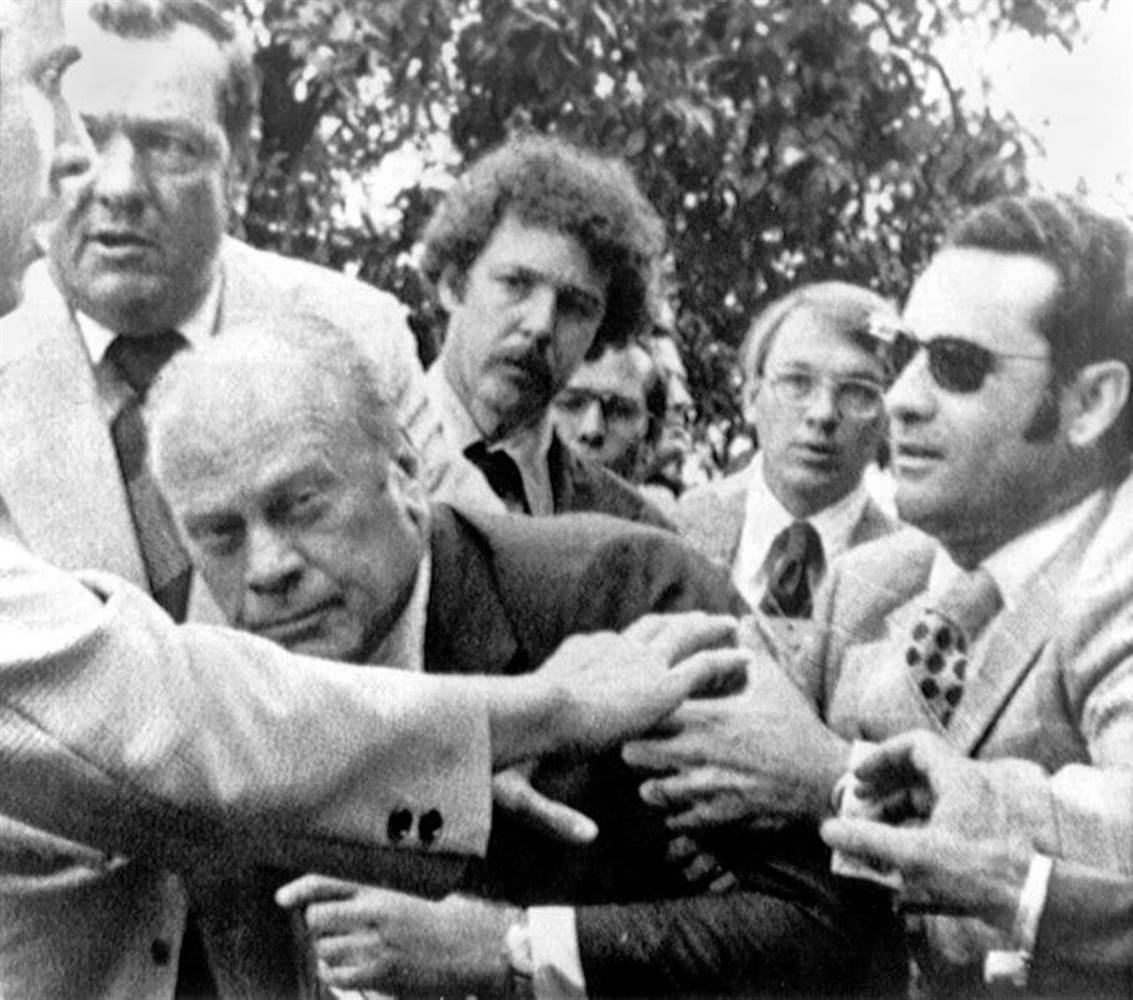 The following article on Gerald Ford assassination attempts is an excerpt from Mel Ayton’s Hunting the President: Threats, Plots, and Assassination Attempts—From FDR to Obama. It is available for order now from Amazon and Barnes & Noble.

There were many Gerald Ford assassination attempts during his short presidency. Here are some of the “highlights.”

Ford was the target of “repeat offenders” such as Thomas D. Elbert, who had spent five years in prison for threatening the life of President Nixon. Shortly after being released for that crime, Elbert telephoned the Secret Service office in Sacramento and said, “I’m going to kill your boss, Ford.” Elbert was arrested on August 17 after people at a gospel mission said Elbert had been bragging about his threats. He was sentenced to another five-year prison term.

In 1974, President Ford became the target of a Muslim fanatic, Marshall Hill Fields. Fields turned to Islam after his father’s death from cancer. He planned a “disruptive action” against the U.S. government for Christmas Day 1974. The agency had received a letter in which Fields explained his conversion from Christianity to Islam, declaring, “If it is God’s will I will denounce my citizenship to this country on December 25th 1974 . . . and if it is God’s will, I will be out of this country to seek political asylum in one of the countries now known to be a member of the ‘Third World.’” Fields said he wanted to deliver a copy of the Koran to President Ford. The agency placed Fields under investigation.

Around 6:00 a.m. on Christmas Day, Fields drove west in his two-door brown Chevrolet Impala and started to make what White House guards said was a U-turn. Instead, he rammed the car through the wrought iron Northwest Gate and drove up to within twenty feet of the front door of the executive mansion. Fields gunned the engine then stepped out of his car before threatening to set off sticks of dynamite taped to his body. He told Secret Service agents he was the “Messiah.”

Agents with high-powered weapons hiding in nearby bushes and behind pillars of the portico withheld their fire. A standoff ensued, during which Fields said he wanted to talk to Sahabzada Yaqub Kahn, the Pakistan ambassador to the United States. When White House staff called the ambassador, they were told he had never heard of Fields. The confrontation continued for another hour before Fields asked that his demand to see the ambassador be broadcast on the Howard University radio station. The demand was met, and after he heard the broadcast on his car radio, he surrendered. Agents searched Fields and discovered his “bomb” was made of highway flares. Later a Secret Service official said they would probably have shot Fields if the Fords had been in the White House. Fields was taken to St. Elizabeth’s Hospital for psychiatric examination. He was sentenced to eighteen months in jail for destruction of federal property after a jury deadlocked on the question of his sanity.

One week later, a copycat threatener tried to drive into the White House grounds. He was arrested after a scuffle, and the Secret Service sent him to join Fields at St. Elizabeth’s.

Although President Ford was not in the White House during the incidents (he had been skiing in Vail, Colorado), they highlighted the extreme danger the president faced by “non-mentals” or “mentally ill” attackers, as the agency described them, who were determined to breach the president’s security.

Between 1974 and 1976, there were many White House “intrusions” that were taken very seriously by the Secret Service although they involved no direct threat to the president’s life. On Thanksgiving night 1975, Gerald B. Gainous Jr. scaled the White House wall, hid undetected for two hours, and got within reach of the president’s daughter, Susan Ford, as she was unloading camera equipment from her car. Ten days later, Gainous again climbed the fence. He said he wanted to ask President Ford to pardon his father, a convicted heroin smuggler.

The following year, White House uniformed police officer Charles Garland fatally shot Chester Plummer, a thirty-year-old intruder whom Garland had told three times to put down a three-foot metal pipe that he was holding in “a threatening manner.” Officers thought it was a bomb.13 In December 1976, Steven B. Williams rammed the White House Northwest Gate on Pennsylvania Avenue with a pickup truck. He suffered cuts and bruises and was arrested and charged with destruction of government property. Williams shouted at reporters as he was led away, “Trying to wake him up before he kills us all.”

This article on Gerald Ford assassination attempts is from Mel Ayton’s Hunting the President: Threats, Plots, and Assassination Attempts—From FDR to Obama.. Please use this data for any reference citations. To order this book, please visit its online sales page at Amazon or Barnes & Noble.