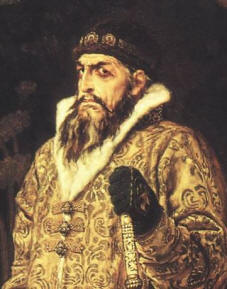 Famous for being the first Tsar of Russia

Ivan IV Vasilyevich was born in Russia on 25th August 1530. At the age of 3 he became Grand Prince of Moscow when his father died. His mother acted as regent for the first five years of his reign but then she died and the regency was taken over by family members.

Ivan reached his majority at the age of 16 and was crowned on 16th January 1547. The early years of his reign saw reform of the legal system, the creation of a standing army and reform of local and national government.

St Basil’s Cathedral in Moscow was built at his request and legend tells that he was so impressed with the work that he ordered the architect to be made blind so that he could not design anything better.

He introduced laws that would eventually lead to the serfdom of the Russian peasant population.

After the death of his first wife in 1560 Ivan became suspicious of everyone around him, mentally unstable and violent. He married a further 7 times between 1561 and 1581 each wife being either found dead in mysterious circumstances, murdered or sent to a convent

During the later years of his reign Russia was ravaged by war, terror and famine. Ivan became increasingly unstable and violent and in 1581 flew into a rage because his pregnant daughter-in-law was not properly dressed. He beat her and she miscarried. His son then argued with him. This provoked Ivan further and he hit his son with a staff. His son died of his injuries.

Ivan was given the nickname ‘Grozny’ which translates into English as terrible (dangerous, fearsome, creating terror). He died on 18th March 1584 and was succeeded by his son Feodor.