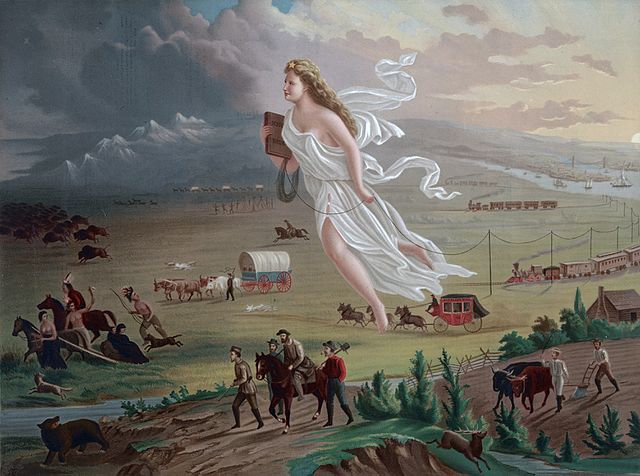 Historians can piece together the past with many tools: manuscripts, letters, first-hand accounts, archeology, and even DNA tests to study human migrations. But there’s one historical research tool they used widely until about 100 years ago but has now fallen into complete disuse: the will of God.

It was once a surprisingly commonplace way to approach history. The nineteenth century’s most eminent and influential historian, George Bancroft, captured the mainstream of national American thought with his ten-volume History of the United States of America, centered on the idea of the nation’s heaven-ordained destiny. In his introduction to this once ubiquitous series of tomes, embraced by every university, secondary school, and public library in the country, Bancroft declared: “It is the object of the present work to explain how the change in the condition of our land has been accomplished; and, as the fortunes of a nation are not under the control of a blind destiny, to follow the steps by which a favoring providence, calling our institutions into being, has conducted the country to its present happiness and glory.”

But such an approach to history is nearly extinct among modern historians. The thinking goes that trying to claim that God intervened in human history—and that humans can deduce how it happened—is a sloppy research method. Medieval and early modern chroniclers may have sprinkled their accounts with frequent reference to the divine (and the whole discourse of Manifest Destiny was based on this sort of thinking), but such methods violate the material scientism of modern history. Best leave God to the theologians. It is literally using a deus ex machina, right?

In The American Miracle: Divine Providence in the Rise of the Republic, bestselling author and radio host Michael Medved recounts some of the most significant events in America’s rise to prosperity and power, revealing a record of improbabilities and amazements that demonstrate what the Founders believed all along: that events unfolded according to some master plan, with destiny playing an unmistakable role in lifting the nation to greatness.

Medved argues that the history of the United States displays an uncanny pattern: at moments of crisis, when odds against success seem overwhelming and disaster looks imminent, fate intervenes to provide deliverance and progress. Historians may categorize these incidents as happy accidents, callous crimes or the product of brilliant leadership, but the most notable leaders of the last 300 years have identified this good fortune as something else – a reflection of divine providence.

Among the illogical episodes he describes are…

Michael’s theory is, of course, one that most secular people probably wouldn’t accept. As such, I try to play devil’s advocate in my interview with him (if God really keeps America on the straight path, how does that explain dark chapters in her history, like the brutal U.S. occupation of the Philippines in the 1890s?).

But whatever you believe, this is an idea that many serious minds in history have believed. Nearly all the the Founding Fathers believed in America’s divine destiny (even including deists such as Franklin and Jefferson). Every president up to Calvin Coolidge publicly declared that God guided the events of the United States and made her special.

Enjoy this interview with Michael Medved

The American Miracle: Divine Providence in the Rise of the Republic