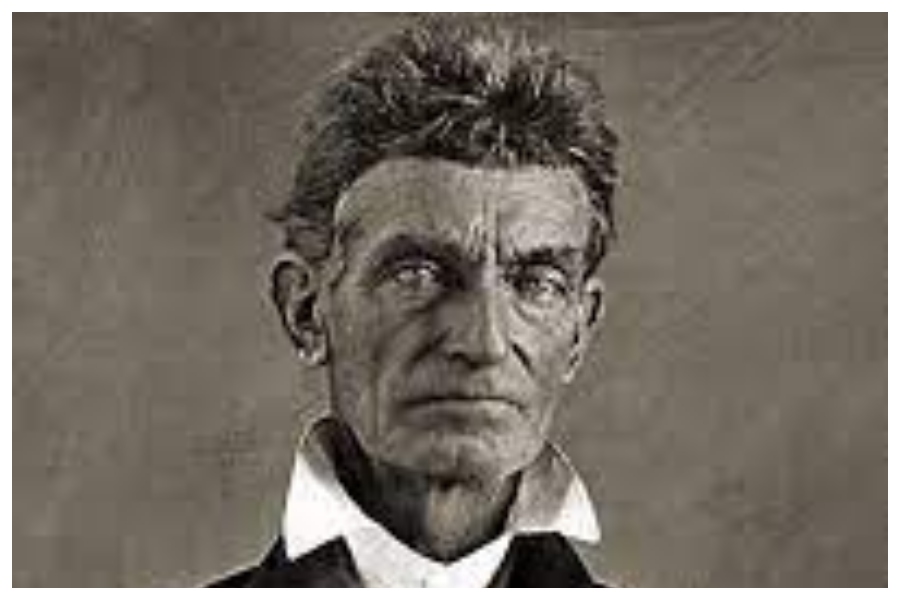 John Brown was unquestionably one of the most fervent opponents of slavery.

The abolition movement is a rich tapestry of events and figures, culminating in the repudiation and abolition of what Thomas Paine called in his essay on slavery, the “savage practice”.

John Brown was born in May of 1800 in Connecticut. His religious parents instilled in him early on a strong belief in the bible as well as revulsion to and disgust of slavery.

1812 would prove to be a seminal year in the life of Brown as the 12-year-old was delivering a herd of cattle in Michigan. The young Brown lodged with a man who owned a slave. While Brown was treated well, he witnessed the slave, who was no older than himself, being beaten mercilessly with an iron shovel. This experience doubled and perhaps tripled, Brown’s hatred of slavery.

Smithsonian Magazine writes that Brown was largely self-taught, a humorless young man with a knack for judging wool by its feel. [By 1815], he was certain he could command top prices from the mills then sprouting in the Northeast, but his wool brokerage turned out to be just one of Brown’s 15 business failures.

In 1837, the name Elijah Lovejoy would echo throughout the rest of Brown’s life. Lovejoy was a presbyterian minister and journalist who ran a newspaper in Alton, Illinois that observed a staunchly antislavery position.

The National Abolition Hall Of Fame And Museum records that In Alton, he led the College Avenue Presbyterian Church and started a newspaper called the Alton Observer, which regularly featured his anti-slavery columns. Thus, he became a highly visible target for pro-slavery advocates.

In response to the threats, Lovejoy bravely stated that “as long as I am an American Citizen, and as long as American blood runs in these veins, I shall hold myself at liberty to speak, to write, and to publish whatever I please on any subject.”

During a firefight between Lovejoy and his men and a pro-slavery group on November 6, 1837, Lovejoy was shot five times, dying later that evening.

After hearing the news of Lovejoy’s death, Brown publicly stated that “Here, before God, in the presence of these witnesses, from this time, I consecrate my life to the destruction of slavery.”

By 1854, the ground was shifting underneath the feet of the anti-slavery advocates in America. The Kansas-Nebraska act of 1854 is signed into law by then-President Franklin Pierce, creating the territories of Kansas and Nebraska. Additionally, it also effectively repealed the Missouri Compromise, which called for a restriction on the expansion of slavery. As PBS elaborates, with a nod to Southern power, the federal government placed the volatile issue of slavery into the hands of those settling the new territories. The people will decide, by popular vote, whether to be “free” or “slave.”

A staunch anti-slavery advocate who certainly wouldn’t mind being called a radical, it is in 1856 that Brown visits Pottawatomie Creek. On the night of May 24, 1856, Brown, along with five of his sons, and three other associates murdered five proslavery men at three different cabins along the banks of Pottawatomie Creek, in what is now Lane, Kansas. Brown had been enraged by both the sacking of the anti-slavery town of Lawrence several days before and the vicious attack on Charles Sumner on the floor of the U.S. Senate, in which Representative Preston Brooks, of South Carolina, relentlessly beat Sumner with a cane. The killings at Pottawatomie Creek marked the beginning of the bloodletting of the “Bleeding Kansas” period, as both sides of the slavery issue embarked on a campaign of terror, intimidation, and armed conflict that lasted throughout the summer.

It is difficult to exaggerate the significance of John Brown’s raid on the federal arsenal at Harpers Ferry, Virginia (now West Virginia), in 1859. Brown, who was almost certainly insane, believed himself to be on a divine mission to destroy the institution of slavery. Three years earlier, he had carried out the bloody Pottawatomie Creek Massacre in Kansas, where mutual antagonism had existed between pro-and anti-slavery factions ever since the highly irregular elections for the territorial legislature in 1855.

Brown and his companions targeted five families—none of whom owned any slaves— who in Brown’s view were loyal to the wrong Kansas faction. His methods were terrifying: In each case, he and his followers dragged the man of the house from his bed and butchered him as his family screamed in horror. Following this gruesome episode, Brown became a fugitive, only resurfacing in 1859 when he planned a strike against slavery that he hoped would be far more systematic and effective than the murders he had perpetrated in Kansas.

In October 1859, Brown and nineteen followers seized the federal arsenal at Harpers Ferry to foment and equip a massive slave insurrection throughout the South. It was a spectacular failure: John Brown and his supporters found themselves surrounded by hostile local citizens, militiamen, and even U.S. troops commanded by Robert E. Lee. Brown surrendered after ten of his followers had been killed. He and six followers were sentenced to death and hanged.