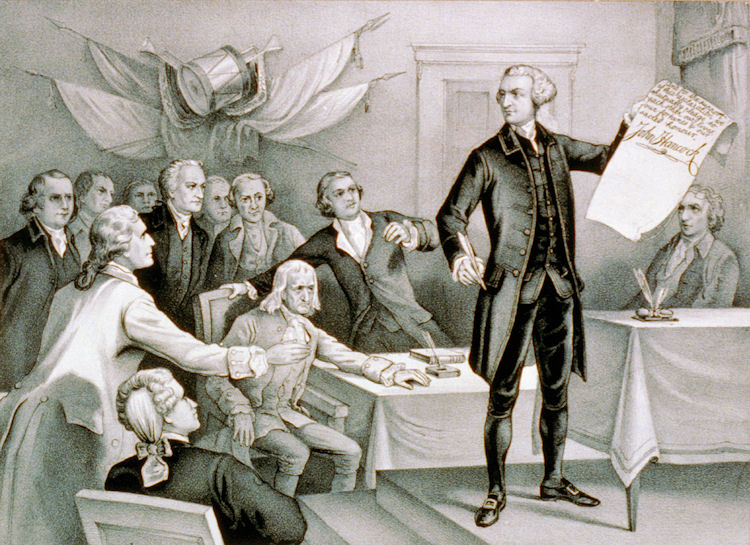 John Hancock’s role in the  American Revolution was pivotal before the war actually began. In contrast to most of the other prominent revolutionary leaders, Hancock did not have the gift of the pen, and was not a great speaker. But because of his personal connections through the House of Hancock, he was an important and respected member of his community. The Stamp Act riots that erupted in 1765 worried Hancock. He was a conservative businessman, worried that violence from the lower classes could be precipitated against any wealthy man, including himself. He gently urged his powerful friends, royal officials included, to reconsider the Stamp Act, but when the act was implemented against his warnings, Hancock decried it as unconstitutional. “I have a right,” he wrote, “to the Libertys and privileges of the English Constitution, and as Englishmen will enjoy them.”

He supported, in protest, the non-importation of British goods, and gave liberally to the patriot cause. Hancock eventually became allies with the more outspoken Samuel Adams, who groomed him for leadership in the cause of independence. While he served as a local selectman and in the Massachusetts government, he focused most of his energy on the House of Hancock and hoped that the British would refrain from any further hostile acts. But the Townshend Duties of 1767 sparked a furious response. He wrote to a London associate that the only choice left for Americans was to “unite &come under a Solemn agreement to stop importing any goods from England….”But this didn’t stop him from continuing his thriving merchant business, some-times clandestinely through smuggling. He was moving closer to the position that a breach with England was inevitable.