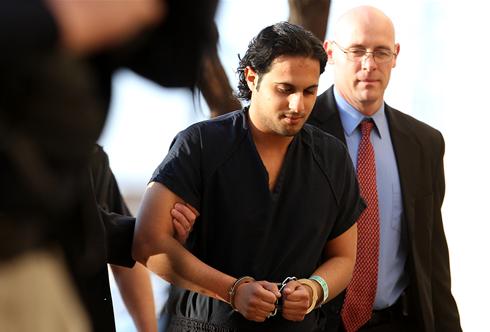 The following article on Khalid Ali-M Aldawsari is an excerpt from Mel Ayton’s Hunting the President: Threats, Plots, and Assassination Attempts—From FDR to Obama. It is available for order now from Amazon and Barnes & Noble.

George W. Bush kept a relatively low profile after he left office. But he was still targeted by Muslim fanatics, including twenty-two-year-old Khalid Ali-M Aldawsari, a former Texas Tech University chemical engineering student. Aldawsari came to the United States in 2008 from Riyadh, Saudi Arabia, to study chemical engineering at Texas Tech and transferred in early 2011 to nearby South Plains College, where he studied business. Aldawsari kept a handwritten journal, in Arabic, in which he wrote that he had been planning a terror attack in the United States for years, even before he came to the country on a scholarship. “And now, after mastering the English language, learning how to build explosives and continuous planning to target the infidel Americans, it is time for Jihad,” he wrote in his journal. Aldawsari, who was heavily influenced by Osama bin Laden’s speeches, also blamed Bush for the plight of Muslims worldwide.

On February 6, 2011, Aldawsari sent himself an email titled “Tyrant’s House,” in which he listed the former president’s Dallas address. The FBI discovered Aldawsari’s plans after he made online purchases with a chemical company and a shipping company. The chemical company reported a suspicious $435 purchase to the FBI, while the shipping company notified Lubbock police and the FBI because it appeared that the order was not intended for commercial use. The chemical explosive Aldawsari was trying to make had about the same destructive power as TNT. FBI bomb experts said the amounts would have yielded almost fifteen pounds of explosive— about the same amount used per bomb in the London subway attacks that killed scores of people in July 2005.

When FBI agents secretly searched Aldawsari’s apartment in Lubbock, Texas, in February 2011, they found almost everything needed to build a bomb, including chemicals, beakers, flasks, wiring, a hazmat suit, and clocks. Aldawsari had also ordered thirty liters of nitric acid and three gallons of concentrated sulfuric acid. Aldawsari’s computer contained a video in which Ayman al-Zawahri, al Qaeda’s leader, praised as martyrs two unnamed individuals killed by “American Crusaders.” Two instructional videos on the computer showed how to prepare the explosive picric acid and how to use a cell phone as a remote detonator.

At his trial, Aldawsari’s attorneys used the insanity defense. But the jury found him guilty in less than two hours, and he was sentenced to life in prison in November 2012. Judge Donald E. Walter said the evidence against Aldawsari was “overwhelming.”

This article on Khalid Ali-M Aldawsari is from Mel Ayton’s Hunting the President: Threats, Plots, and Assassination Attempts—From FDR to Obama. Please use this data for any reference citations. To order this book, please visit its online sales page at Amazon or Barnes & Noble.