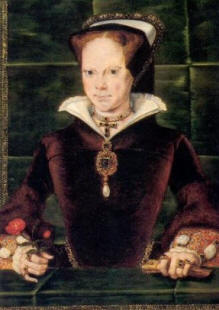 Famous for being Queen of England

Mary I, daughter of Henry VIII and Catherine of Aragon, has the misfortune of being remembered as ‘Bloody Mary’.

Mary became Queen in 1553 following the death of her brother Edward and the deposement of Jane Grey. As a devout Catholic, Mary believed that unless Catholicism was restored in England, all her subjects would go to hell.

In 1554, Mary married Philip II of Spain. Spain was a Catholic country and Philip joined Mary in her bid to restore England to Rome.

The Catholic service, Holy Communion, and the elaborate fixtures and fittings of Catholic churches taken away during Edward’s reign were immediately restored. In 1555, Parliament passed a set of Heresy laws that made it a crime to be Protestant in England. All Protestants who refused to convert to Catholicism were to be burnt. One of the first to go to the stake was John Rogers who had translated Tynedale’s Bible into English. The Bishops, Nicholas Ridley, Hugh Latimer and Thomas Cranmer followed soon afterwards. In all Mary was responsible for the burnings of 227 men and 56 women, mostly in the South East of England.

Mary’s marriage to Philip was not popular, the people had no wish to be governed by a foreigner and there was racial tension between the English and Spanish merchants in London. Thomas Wyatt led some 3,000 men from Rochester in Kent to London in protest against the Queen’s marriage and her anti-Protestant policies.

In 1557 Philip persuaded Mary to commit England to helping him fight against France. Mary duly declared war on France. However, the move was disastrous for England and for Mary. The French invaded and reclaimed Calais, England’s last possession in France and the people were fed up with paying higher taxes to pay for a war that had only been started to help Spain.

In 1555 Mary had announced that she was pregnant and that the baby was due in June 1555. However, the pregnancy turned out to be a phantom pregnancy. It is now believed that Mary had cancer of the womb.

When Mary died in 1558 her half-sister, Elizabeth became Queen.