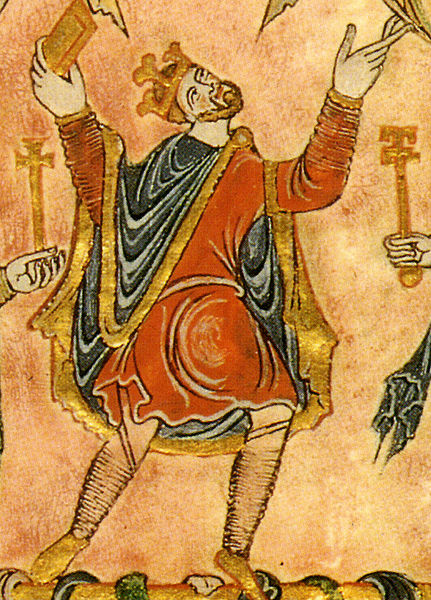 For more information on medieval clothing and other counter-intuitive facts of ancient and medieval history, see Anthony Esolen’s The Politically Incorrect Guide to Western Civilization.

What you wore depended on who you were in the Medieval period and your rank in the feudal system.

If you were rich you would probably own a variety of clothes in the latest styles and colors. If you were a poor peasant, you may only own one tunic. Although it was possible to obtain silks and other luxurious materials from abroad, they were very expensive. Most clothing therefore was made out of wool. This meant that clothing in the Medieval period was itchy, difficult to wash and dry and very hot in the summer.

Medieval Clothing of Noblemen and Women 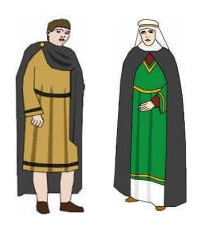 These pictures (above) show the costume worn in the early medieval period by the rich.

The man is wearing a woollen tunic, belted at the waist that has been embroidered around the hem and sleeves. Over this he has a woollen cloak fastened with a brooch.

The man’s wife is wearing a woollen dress, tied at the waist over a white linen underskirt. Over this she has a woollen cloak. Her headdress is made out of linen and is held in place with a headband.

This famous portrait was painted by Jan Van Eyck in 1435 (towards the end of the Medieval period). It shows a rich nobleman and his wife dressed in the typical fashion of the day.

The man is wearing a fur-trimmed velvet gown over a black padded long shirt that has gold embroidery around the edges. He has black stockings to cover his legs. The large hat is a sign of his wealth.

The man’s wife is wearing a green woollen dress trimmed with cream coloured fur that is belted very high. Underneath the dress she has another dress made out of blue material. Her headdress is made out of fine expensive linen. 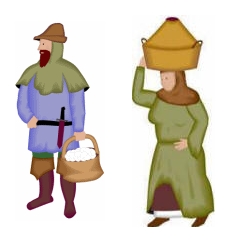 The man’s wife is wearing a woollen dress over a woollen underskirt. She has a woollen cowl to protect her head and shoulders and boots on her feet. 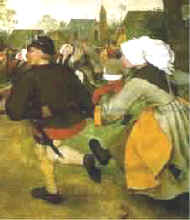 This picture, from a painting by Bruegel, shows late medieval peasants enjoying a wedding. They are, therefore, wearing their best clothes, including shoes and hats.

For more information on medieval clothing and other counter-intuitive facts of ancient and medieval history, see Anthony Esolen’s The Politically Incorrect Guide to Western Civilization © 2008. You can find it at Amazon or Barnes & Noble. 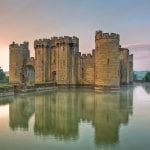