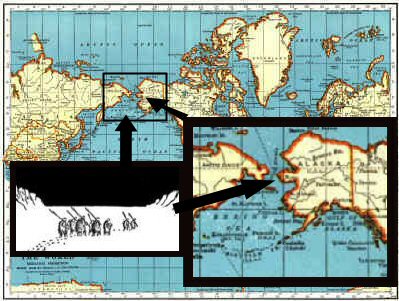 Native American people and their stories.

Christopher Columbus was the first European to set foot in the country that was to be called America – Right!

There is a huge difference between the two statements above. The North American continent had been inhabited for thousands of years before Europeans ‘discovered’ it and settled there.

Over a period of time these people migrated further and further south. They adapted themselves to their environment – those living in the cold north became skilled hunters and fishermen, those living in the wooded areas built wooden houses and canoes while those in the hotter south grew corn and made houses from sun-dried bricks. There were hundreds of different tribal groups each adapting their lifestyle to the geographical and climatical region they inhabited. Those native American people, who were to become known as the Plains Indians, initially inhabited the eastern river valley areas.

The Arrival of Europeans 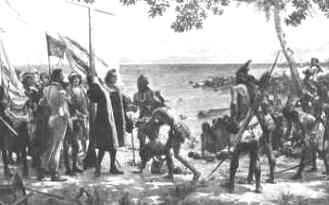 When the first Europeans arrived in North America they believed they were in India and named the native American people “Indians”. The name was to stick for nearly 500 years. The arrival of Europeans posed problems for the native Americans. Some groups chose to co-exist with the Europeans and adapted themselves to a more European style of living. Others however, wanted to preserve their traditional way of life and moved to areas unwanted by the Europeans.

The arrival of Europeans also initiated the decline of the Native American Indians. Entire villages were wiped out by diseases such as measles, smallpox, cholera and pneumonia to which the Indians had no inbuilt immunity. Others, forced to leave their traditional hunting and farming lands found it difficult to re-establish themselves elsewhere and suffered malnutrition and death. 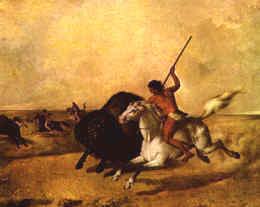 As the numbers of white Americans grew and they began to move away from the coastal areas, the Indians that lived in the eastern river valleys were forced to move west onto the Great Plains.

Horses were not native to North America, they were brought from Europe by the settlers. By the eighteenth century many Indian nations had horses. This meant that they were able move onto the Plains and hunt the buffalo that lived there more easily.

Many tribes gave up farming and became solely reliant on the buffalo for all their needs. They lived a nomadic life following the buffalo herds as they moved across the Plains.