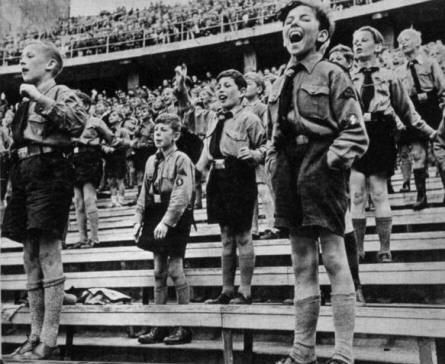 In the early 1920s, the Nazi party had established a youth movement led by Kurt Gruber, with the aim of attracting young men who could be trained to become members of the SA (Stormtroopers). On 4th July 1926 the group was renamed the Hitler Youth, League of German Worker Youth and became attached to and run by the SA.

The Hitler Youth (Hitler Jugend) wore uniforms and  attended meetings and rallies where they were indoctrinated with Nazi views. 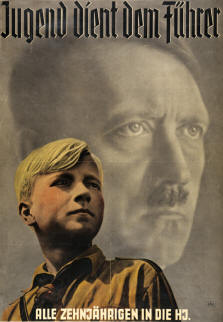 Adolf Hitler believed that the support of the youth was vital to the future of the third Reich and aimed, through the Hitler Youth programme, to produce a generation of loyal supporters of Nazi views.

When the Nazis came to power in 1933 other youth groups were forcibly merged into the Hitler Youth and by the end of 1933 membership stood at just over 2 million.

In December 1936, membership of the Hitler Youth became virtually compulsory for all boys and girls aged over 10 years – membership could only be avoided by not paying subscription fees, but this ‘loophole’ was relaxed in 1939 and membership increased to 8 million members by 1940.

There were separate Hitler Youth groups for boys and girls:

Boys aged 10 – 13 years joined the German Young People (Deutsche Jungvolk). They still did sporting activities but these had a more military emphasis such as parading and marching as well as map reading. They also learnt about Nazi views on racial purity and anti-semitism.

Boys aged 14 – 18 years joined the Hitler Youth (Hitler Jugend). They were prepared to be soldiers by doing military activities.

Girls aged 10 – 14 years joined the Young Maidens (Jungmadel) where they were taught good health practices as well as how to become good mothers and housewives. They also learnt about Nazi views on racial purity and anti-semitism.

Girls aged 14 – 21 joined the League of German Maidens (Deutscher Madel) where they were further prepared for their roles as the mother of future Germans.