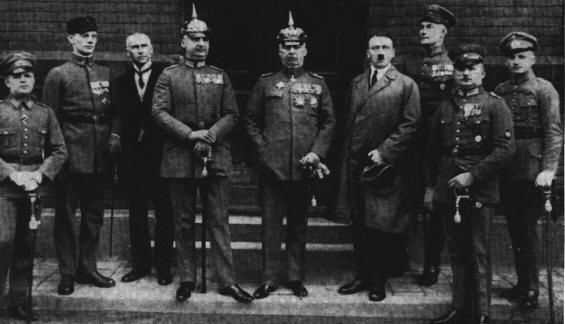 Following the abdication of Kaiser Wilhelm and defeat in World War One, the government of the new German Weimar Republic were forced to accept the terms of the Treaty of Versailles, which included the payment of reparations to the allies of 6,600 million.

The repayments led to a devaluation of the German mark against foreign currencies and to hyperinflation in Germany. In 1923, when Germany defaulted on its repayments France occupied the Ruhr industrial region of Germany.

With popular feeling against the government, Hitler believed that the time was right for his National Socialist German Workers’ Party (Nazi Party) to overthrow the government.

On 8th November with the support of other Socialist groups, and former World War One General Ludendorff, Hitler ordered 600 of his Stormtroopers under the command of Herman Goering to surround a Beer Hall in Munich where Conservative politician Gustav von Kahr was making a speech to 3,000 people. Also present were the local army commander, Lossow and the Bavarian police chief, Seisser. At about 8.30pm Hitler entered the hall, stood on a chair and fired a pistol shot into the ceiling. He announced to the crowd that the revolution had begun then ordered von Kahr, Lossow and Seisser into an adjoining room. After about ten minutes the group returned to the hall and Hitler announced that he had the support of all three men. When the meeting ended, Hitler immediately began planning his takeover of Munich. Von Kahr, Lossow and Seisser went straight to the authorities.

The next morning Hitler and 3,000 Nazi supporters began a march on Munich. However, it soon became apparent that the authorities had been alerted when they encountered a road block manned by 100 armed police. Shots were fired killing sixteen Nazis and four police officers. Both Hitler and Goering were injured and ran to take cover. Other Nazis also ran. Ludendorff however continued to march on, he later branded Hitler a coward and refused to have anything more to do with him.

Hitler was arrested on 12th November and charged with treason. He was found guilty at his trial in February 1924 and given a five year prison sentence. While in prison Hitler wrote his famous book Mein Kampf.