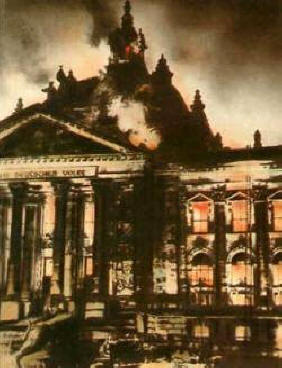 At 10pm on 27th February 1933 the Berlin Fire Department received a call that the Reichstag building was on fire.

A young communist Marinus van der Lubbe was discovered on the premises clad in just trousers and footwear.

A number of small fires had been started around the building but most failed to take hold except the fire started in the great chamber.

Van der Lubbe and four other communists, Ernst Torgler, Georgi Dimitrov, Blagoi Popov, and Vassil Tanev were arrested and charged with arson and attempting to overthrow the government.

Although van der Lubbe confessed to the crime, many people believed that the real culprits were the Nazi Party, probably members of the SA.

The case against the Communists

Marinus van der Lubbe, a known Communist, was discovered on the premises.

The case against the Nazi Party

It is questionable whether Marinus van der Lubbe would have been able to start fires which caused so much damage alone.

Karl Ernst, leader of the Berlin SA was overheard saying that if he had played a part in starting the fire he would be foolish to admit it.

On 28th February 1933 Adolf Hitler went to see President Paul Hindenburg and informed him that the fire was the result of a Communist plot. Hindenburg was convinced and signed the Order of the Reich President for the Protection of People and State, known as the Reichstag Fire Decree.

Hitler used the Reichstag Fire Decree to arrest thousands of Communists and to ban all Communist publications. The Communist party was outlawed and not allowed to take part in the March 1933 elections (the Communist Party had gained 17% of the vote in the 1932 elections).

In July 1933 Marinus van der Lubbe, Ernst Torgler, Georgi Dimitrov, Blagoi Popov, and Vassil Tanev were tried on a charge of arson and attempting to overthrow the government. Van der Lubbe, who confessed to the crime, was found guilty but the others were aquitted as there was insufficient evidence against them. Marinus van der Lubbe was beheaded on 10th January 1934.