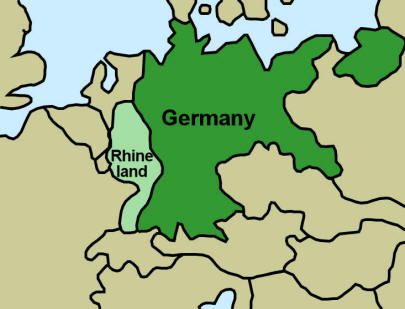 Under the terms of the Treaty of Versailles 1919 Germany was not allowed to have any military force, building or armaments in the Rhineland area. To ensure German compliance the area was occupied by British and French troops.

Under the terms of the Treaty of Locarno 1925 Germany, France, Britain and Italy agreed that the Rhineland should remain a demilitarised zone permanently. By June 1930 British and French troops had evacuated the area.

In January 1936 Adolf Hitler began to make plans to re-occupy the Rhineland. He argued that the move was needed as a defence strategy especially as France and the Soviet Union had renewed their alliance in 1935.

The date for occupation was set for 7th March 1936 and in the early morning 32,000 armed German troops entered the Rhineland.

Although Germany had been steadily building up her army since 1933 it was not strong enough to hold the Rhineland if France or Britain counter-attacked. Hitler later commented “The forty-eight hours after the march into the Rhineland were the most nerve-racking in my life. If the French had then marched into the Rhineland we would have had to withdraw..”

France was on the verge of elections and politicians were unwilling to take steps that would be unpopular with the population. French politicians and leaders knew that taking military action against Germany would be expensive and could lead to a full-scale Franco-German war.

The French appealed to the British for support but many British politicians felt that Germany was simply re-claiming what was theirs anyway. Additionally, popular feeling in Britain was totally against another major war.

The League of Nations, established by the Treaty of Versailles to deal with acts such as this, condemned Hitler’s action but did not enact economic or military sanctions.
This post is part of our collection of resources on Nazi Germany. Click here for our comprehensive information resource on the society, ideology, and key events in Nazi Germany.