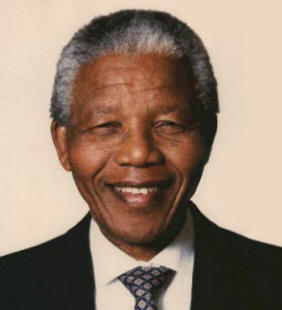 Famous for being leader of the ANC, President of South Africa

Nelson Mandela was born on 18th July 1918. He attended the local mission school before attending a Wesleyan secondary school in Healdtown. He then went to the University College of Fort Hare where he became a member of the Student’s Council. Mandela failed to gain his degree because he was expelled from the university for his involvement in a boycott against University policies.

Mandela moved to Johannesburg and became involved with the African National Congress. In 1944 he was a leading member in the formation of the African National Congress Youth League (ANCYL). The aims of the ANCYL, to promote equality and an end to apartheid through use of boycotts, strikes, civil disobedience and non-co-operation with the authorities was eventually adopted by the ANC.

Throughout the 1950s Mandela was frequently arrested and even imprisoned. Following the Sharpeville Massacre in 1960 when South African police opened fire on a group of demonstrators, the ANC banned and Mandela was forced to adopt a lifestyle of subterfuge, wearing disguises and moving from place to place to avoid detection.

In 1962 Mandela left South Africa without permission. On his return he was arrested and charged. He conducted his own defence and challenged the all-white court with impartialism stating ‘ I detest racialism, because I regard it as a barbaric thing, whether it comes from a black man or a white man’. He was convicted and sentenced to five years imprisonment. While in prison he was further charged with sabotage and sentenced to life imprisonment.

Following his release from prison Nelson Mandela was elected president of the ANC. In 1993 he was awarded the Nobel Peace prize and following the country’s first democratic election in 1994 became President of South Africa. In 1999 Mandela retired from public life.