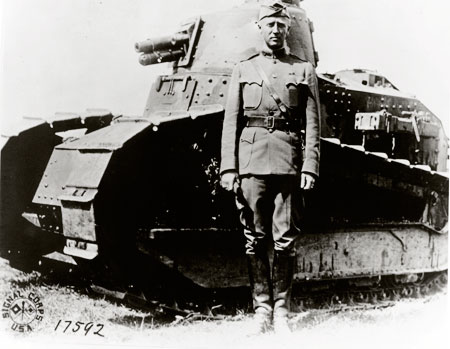 The following article on Patton in World War I is an excerpt from H.W Crocker III’s The Yanks Are Coming! A Military History of the United States in World War I. It is available for order now from Amazon and Barnes & Noble.

George S. Patton is a legendary World War II general, but much of his character as a military man was formed in the Great War. His path to the numerous monumental events that he experienced there began after he finished at West Point. Patton benefited from having six years of formal military education. He graduated at twenty-four, accepting a commission in the cavalry and duty at Fort Sheridan, Illinois. He liked the men, considered his commanding officer a true gentleman, but had doubts about some of the other officers, especially those who had come up from the ranks. In 1910, he was married to Beatrice Ayer, a family friend he had long courted. She, though Patton paid scant attention to this, came from a wealthy family. It wasn’t money that mattered to him, but the fact that she was poised, pretty, and polished (she had been educated in Europe, spoke French, as did he, and played the piano). He credited her strength of character with strengthening his own. She also helped his spelling, as he now took to writing articles on military subjects (as well as riding to hounds, playing polo, and other recreational endeavors appropriate for an officer and a gentleman). She bore him two daughters and a son.

At the end of 1911, he was transferred to Fort Myer, Virginia, where many senior officers lived, making it a prime duty post for an ambitious cavalryman. But aside from his ardor for his duties and his active social life with the right sort of people, Patton was starting to make his mark as an athlete—indeed, in 1912 he represented the United States at the Olympics, competing in the modern pentathlon, which tested a competitor’s equestrian skills with a steeplechase, marksmanship with a pistol, fencing, swimming three hundred yards, and running cross country two and a half miles. The event reflected the actions that might be required of an officer delivering military dispatches. He came in fifth.

Back home, he wrote an article that led to the 1913 redesign of the U.S. Cavalry saber. In the fall of 1913, he was sent to the Cavalry School at Fort Riley, Kansas, where he was to be both student and instructor, serving as “Master of the Sword.” At his own expense, he went to France to hone his swordsmanship before taking up his new post. When war erupted in France in 1914, Patton wanted to take up the sword in earnest, fighting in the French army. He wrote to General Leonard Wood asking for his advice and assistance. Wood replied, “We don’t want to waste youngsters of your sort in the service of foreign nations. . . . I know how you feel, but there is nothing to be done.”4 Patton, like a young Napoleon, had ambitiously hoped to be a brigadier general by twenty-seven. At twenty-nine, he was not yet a first lieutenant.

Ambitions thwarted, his thirst for action still would not be denied. In 1915, he was sent to Fort Bliss, Texas, where the cavalry troops were all turned out in “Patton swords”: “It was a fine sight all with sabers drawn and all my sabers. It gives you a thrill and my eyes filled with tears . . . it is the call of ones [sic] ancestors and the glory of combat. It seems to me that at the head of a regiment of cavalry any thing would be possible.”5 What seemed immediately possible, or so Patton hoped, was war in Mexico that would involve the United States. When, in 1916, General Pershing was ordered to lead a punitive expedition into Mexico, Patton’s regiment—and Patton—were to stay behind in Texas. But Patton would have none of this. He convinced General Pershing that he should serve him as his aide. He was zealous in his duties and got the action he sought. Leading an expedition of three cars and ten men whose mission was to buy corn for the soldiers in camp, he organized an impromptu raid that netted him one of Pancho Villa’s officers and two banditos shot down in a gunfight—Patton armed with revolver and rifle. Patton and his men returned to camp with the corpses of the Villaists strapped over the hoods of their cars. He was promoted to first lieutenant.

He came away from his experience in Mexico full of admiration for—and a desire to emulate—Pershing. Under Pershing’s command, “Every horse and man was fit; weaklings had gone; baggage was still at the minimum, and discipline was perfect. . . . By constant study General Pershing knew to the minutest detail each of the subjects in which he demanded practice, and by physical presence and personal example and explanation, insured himself that they were correctly carried out.”6

Patton followed Pershing to France as his aide. It was in this capacity that Patton met Field Marshal Haig. Haig, who didn’t think much of most American officers, liked Patton, calling him “a fireeater” who “longs for the fray.” Patton, in turn, liked Haig, a fellow cavalryman, thinking him a proper polo-playing gentleman and even “more of a charger than I am.”7

Patton wanted combat and knew he couldn’t find it as a staff officer to Pershing; to see action he had to either lead infantry or train to become a tank officer. He chose the latter, thinking it the quickest way to combat and further promotion. He wrote to Pershing, reminding him that he was “the only American who has ever made an attack in a motor vehicle”8 (he was referring to the motorized ambush he had led in Mexico), that his fluency in French meant he could read French tank manuals and converse with and take instruction from French tank officers, that he was good with engines, and that as tanks were the new cavalry it was an appropriate branch for a cavalry officer like himself. Privately, he noted to his father, “There will be hundred[s] of Majors of Infantry but only one of Light T[anks].” He had his progress mapped out: “1st. I will run the school. 2. then they will organize a battalion and I will command it. 3. Then if I make good and the T. do and the war lasts I will get the first regiment. 4. With the same ‘IF’ as before they will make a brigade and I will get the star” (of a brigadier general).

It worked out more or less that way, with Patton the first officer—or soldier of any rank in the United States Army—assigned to the Tank Corps, where he was charged with establishing the First Army Tank School. Before he did that, Patton gave himself a crash course in French tanks, which included test-driving them, firing their guns, and even walking the assembly line to see how they were made. He used that experience to write a masterly summary of everything one needed to know about tanks.

His new commander in the Tank Corps, as of December 1917, would be Colonel Samuel D. Rockenbach, a VMI graduate with an aristocratic wife, a taskmasterly way with subordinates, and the massive responsibility of creating the Tank Corps from scratch, including acquiring tanks from the French and the British. When it came to men, Patton intended that the Tanks Corps’ standards of discipline and deportment would exceed those of other American units, and he made a special point of looking after his men, ensuring they were given the best food and billets he could muster.

Patton’s efficiency as a tank commander won him promotion to lieutenant colonel, but he worried the war would end before he had a chance to lead his tankers in combat. That chance came at Saint Mihiel on 12 September 1918. Unsurprisingly, he didn’t stay at his command post but roamed the field under fire, directing attacks; his tankers did well and showed plenty of fighting spirit.

He had been chastised for leaving his command post during the battle at Saint-Mihiel, but he did the same during the Meuse-Argonne Offensive. He followed his tanks into combat, even helping to dig a path for them through two trenches (and whacking a recalcitrant soldier over the head with a shovel). While attempting to lead a unit of pinned-down infantry against the Germans, he was shot through the leg but continued to direct the attack. He wrote to his wife from his hospital bed on 12 October 1918, saying, “Peace looks possible, but I rather hope not for I would like to have a few more fights. They are awfully thrilling like steeple chasing only more so.” He was promoted to colonel. The Armistice came on his thirty-third birthday. All in all, Patton had had a quite satisfactory war.

Peace was another matter. There was no glory in it and no chance for him to achieve the greatness he sought. Polo was his substitute. He studied military history, as well as the last war and current developments. He formulated his own views in articles, including his conclusion that “Tanks are not motorized cavalry; they are tanks, a new auxiliary arm whose purpose is ever and always to facilitate the advance of the master arm, the Infantry, on the field of battle.” Before the next great war he amended that view, recognizing that tanks could be an offensive force of their own.

On 1 October 1919, Patton gave a speech to the Tank Corps on “The Obligation of Being an Officer.” It touched on Patton’s grand view of the profession of arms: “Does it not occur to you gentlemen that we . . . are also the modern representatives of the demigods and heroes of antiquity?. . . In the days of chivalry, the golden age of our profession, knights (officers) were noted as well for courtesy and being gentle benefactors of the weak and oppressed. . . . Let us be gentle. That is courteous and considerate for the rights of others. Let us be men. That is fearless and untiring in doing our duty as we see it.” Patton concluded with a list of recommendations for good behavior and decorum, essentially acting as Colonel Manners. Patton could, famously and frequently, swear up a storm. But he was nevertheless punctilious about gentlemanly conduct.

Patton’s exploits in World War II, and his quotable phrases, are legendary. But his World War I career should not be overlooked. The events of the war stayed with him the rest of his life. In 1943, two years before his death, Patton had spoken at an Armistice Day service honoring American dead, saying, “I consider it no sacrifice to die for my country. In my mind we came here to thank God that men like these have lived rather than to regret that they have died.”

These are words that apply most dramatically to the life of General George S. Patton.

This article on Patton in ww1 is from the book The Yanks Are Coming! A Military HIstory of the United States in World War I © 2014 by H.W Crocker III. Please use this data for any reference citations. To order this book, please visit its online sales page at Amazon or Barnes & Noble.