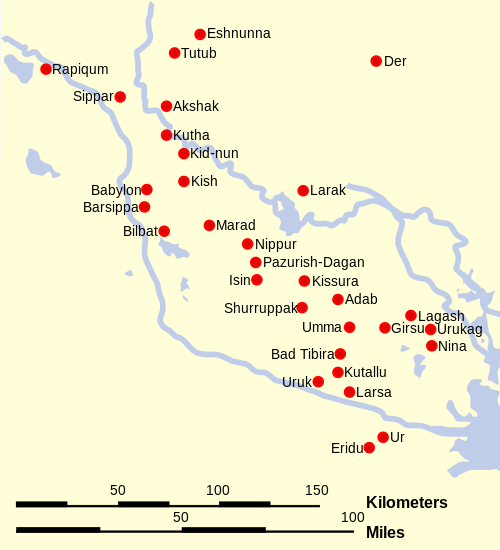 Sumer’s history began long before humans invented writing to record historical events. Much of what we know of prehistoric Sumer was found in archeological ruins, which told of a people who gradually switched from a hunting and gathering society to a settled, agriculture-based culture. As agriculture could produce a surplus of food, people found they could devote their time to other work besides that in the fields. A surplus of food could also sustain a larger population, which congregated at first in small villages.

As time went on, many small villages became the first cities, one of them being Eridu, according to the Mesopotamians themselves. Scholars, however, consider Uruk to be the first city in history. Other Sumerian cities include Ur, Lagash, Adab, Kish, Larsa, Nippur, Kullah and Adab among others.

In 4000 B.C. came the first villages and the beginning of towns. By 3500 B.C., the Sumerian city-states began forming, all centered around temples to the gods. By this time, Sumerian people had invented writing, the wheel, irrigation and water control and sailboats. One of the names for Mesopotamia is the “cradle of civilization,” as the land between the Tigris and Euphrates Rivers was the birthplace of civilization as we know it.

Sumer’s city-states were first ruled by priest-kings, known as Ensi. As society grew more complex, however, and city-states began battling over land and water rights, a secular kingship began, with the rule of a city-state in the hands of a Lugal, or strong man. The Lugal supervised wars and oversaw important trade with other lands. Trade brought in goods such as metal ores that were unobtainable in Sumer itself. It was probably the necessity of record-keeping in long-distance trade that spurred the development of cuneiform writing.

While the archeological record reveals the life of common Sumerians, the Sumerian King List provides some detail of Sumer’s kings. The King List, a cuneiform document that lists and briefly describes all the kings of the region beginning with Etana of Kish, who ruled c. 3100 B.C. A scribe in the city of Lagash wrote the document around 2100 B.C. at the instigation of a king who wished to legitimate his rule by connecting his name with the known kings and their great deeds.

Sumer’s city-states warred with each other continually for land, water rights and other natural resources. One king might create a larger alliance, but no one managed to rule them all until Eannutum of Lagash, who managed to subdue most of the city-states of Sumer under his rule. Lugalzagesi of Umma then held that proto-empire together until he was overthrown by Sargon the Great circa 2234 B.C. Sargon, a Semite rather than a Sumerian, originated from northern Mesopotamia. The Akkadian Empire dominated Sumer for the next 150 years. Sumer, however, would rise again during the Sumerian Renaissance of 2047-1750 B.C.