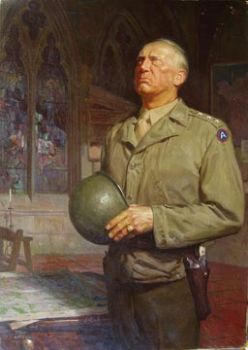 Better known for his profanity than for his prayers, George Patton was actually a devout and religious man. His profanity was merely a device to capture the attention of his soldiers.

Patton’s prayers, however, reflected his deep and sincere faith in God. Throughout his life he prayed daily and attended church almost every Sunday, even in wartime.

One cannot read Patton’s diaries, letters, speeches, and personal papers without being struck by the frequency with which he appeals to God and turns to the Bible for inspiration. Patton prayed to do his best, he prayed for solace in times of trouble, and he prayed for victory in times of war. “No one can live under the awful responsibility that I have without Divine help,” he wrote. In his many trials, Patton turned to God and found remarkable serenity.

The public Patton was brash, self-confident, and boastful. In his private supplications to God, however, a different Patton emerges— humble, uncertain, and seeking guidance. For Patton, God was not a distant and impersonal being but a companion with whom he had a personal relationship. And whenever he achieved anything important, whether it was his admission to West Point or a victory in battle, Pat-ton always gave thanks to God.

For the first twelve years of his life, Patton was educated at home. His aunt read to him three to four hours a day. Her fundamental text-book was the Bible. She also read to him from John Bunyan’s Christian allegory, The Pilgrim’s Progress. He sat beside her in church each Sunday as she recited the liturgical responses from the Book of Com-mon Prayer, and he developed an amazing capacity to repeat passages at length.

Patton’s religious beliefs, like the man himself, were unique and defy easy characterization. He was a communicant of the Episcopal Church, but he studied the Koran and the Bhagavad Gita. He was ecumenical in his beliefs, writing that “God was probably indifferent in the way he was approached,” but he opposed his daughter’s marriage to a Roman Catholic. He was in most respects a traditional Christian, but he had an unshakeable belief in reincarnation and asserted that he had lived former lives throughout history—always as a soldier.

To be successful, Patton believed, a man must plan, work hard, and pray. A man prays to God for assistance in circumstances that he cannot foresee or control. Patton believed that without prayer, his soldiers would “crack up” under the unrelenting pressures of battle. Prayer does not have to take place in church, but can be offered any-where. Praying, he said, is “like plugging in on a current whose source is in Heaven.” Prayer “completes the circuit. It is power.”

To Patton, prayer was a “force multiplier”—when combined with or employed by a combat force, it substantially increases the effective-ness of human efforts and enhances the odds of victory. In this sense, prayer was no different from training, leadership, technology, or firepower. But Patton’s faith was not a mere contrivance with which he cynically tried to motivate his men. He was a sincere believer. He even directed his chief chaplain to send out a training letter to every unit in the Third Army on the importance of prayer.

Prior to World War II, Patton was posted to Fort Myer in Virginia, near Washington, D.C. A regular churchgoer, he summoned the chaplain and bluntly told him that his sermons were too long. “I don’t yield to any man in my reverence to the Lord, but God damn it, no sermon needs to take longer than ten minutes. I’m sure you can make your point in that time.” The following Sunday Patton sat in the front pew. When the chaplain began his sermon, Patton ostentatiously took out his watch. Not surprisingly, the chaplain concluded his sermon exactly ten minutes later.

Patton made the same point a few years later, after the invasion of Sicily: “I had all the non-Catholic chaplains in the other day and gave them hell for having uninteresting services. . . . I told them that I was going to relieve any preacher who talked more than ten minutes on any subject. I will probably get slapped down by the Church union.”

He would not tolerate defeatism in prayers or sermons. Preachers who committed that particular sin he called “pulpit killers.” Clergy-men who insisted “thou shalt not kill” knew less about the Bible than he did, Patton argued. He insisted it was not a sin to kill if one served on the side of God, citing the Old Testament story of David slaying Goliath. Patton would swiftly communicate his displeasure at ser-mons that dwelt on death or families whose sons would never return home. Instead he demanded sermons and prayers which emphasized courage and victory.

Confident in his own religious convictions and his knowledge of the Bible, Patton did not hesitate publicly to contradict a chaplain’s sermon, as this diary entry for Armistice Day, 1943, reveals:

We went to a Memorial Service at the cemetery at 1100. The Chaplain preached a sermon on sacrifice and the usual bull, so as I put the wreath at the foot of the flagpole, I said, “I consider it no sacrifice to die for my country. In my mind we came here to thank God that men like these have lived rather than to regret that they have died.”

Coy Eklund, an officer on Patton’s staff, confirms a story about Patton’s insistence on inspirational sermons:

It is no myth that one Sunday morning, after attending church services as he always did, he stalked into my office in the Army barracks in Nancy, France, where I was the senior duty officer.

“Eklund,” he demanded, “do you know Chaplain So-and-so?”

“Well get rid of the son of a bitch. He can’t preach!” And we got rid of him.