The Tudors – Discoverers and Explorers

In the Tudor period Europeans began to explore the world more than ever before. Some of those who left their homeland and journeyed across the seas were looking for new lands and peoples to trade with, some were looking for better and quicker routes to China and India. 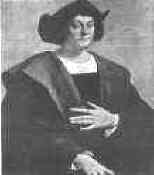 Christopher Columbus (1451-1506) was an Italian explorer who, financed by the king and queen of Spain, set sail to find a new route to India.

He left Europe early in September 1492 and when land was sighted one month later he believed he had found India and named the native people living there, Indians.

Columbus had not reached India as he thought but had reached Central America. He claimed the land for Spain and from 1492 onwards Europeans began to settle in America. They called it the New World.

Ferdinand Magellan (1480-1521) was a Portuguese explorer and the first sailor to sail all around the world.

He did not discover America because he sailed around the bottom of South America.

Sir Francis Drake (1545-1596) was a British explorer and navy captain. He was financed by Queen Elizabeth to discover lands and riches for England. Drake was the second man to sail all around the world and was knighted by the queen for his services to the country.

In 1588 he was one of the Captains that sailed to meet and defeat the Spanish Armada. It is a well known legend that he insisted on finishing a game of bowls before going to his ship.

Walter Raleigh (1552-1618) was an adventurer and explorer who became one of queen Elizabeth’s favourites after putting down a rebellion in Ireland. Elizabeth gave him land and the position of captain of the Queens Guard.

Raleigh led an expedition to the New World and claimed North Carolina and Virginia for England. Virginia was named after Elizabeth who was known as the Virgin Queen because she never married.

In the New World Raleigh discovered potatoes and tobacco and brought them back to England.

While Raleigh had been in the New World Elizabeth had found herself a new favourite, Robert Devereux, Earl of Essex.

In 1592 Elizabeth found out that Raleigh had married one of her maids. She was very angry and put him into the Tower of London. When he was released three years later he left England for the New World in search of gold.

Walter Raleigh had always had enemies and after Elizabeth’s death they convinced James I that he did not support the king, a crime punishable by execution. Raleigh was not executed but was sent to the Tower of London where he spent his time writing. It is thought that his unfinished book ‘History of the World’ was written at this time.

In 1616 he was released from the Tower and once again set off to search for gold. However, while on his expedition he destroyed a Spanish town in the New World. The king of Spain was furious and demanded that Raleigh be punished. James decided to use the execution notice served on Raleigh in 1603. Sir Walter Raleigh was beheaded at Whitehall in 1618.