The Tudors – The Spanish Armada

Shortly after Elizabeth’s accession to the throne of England, in 1559, a peace treaty was signed between England, France and Spain bringing peace to Europe.

Without the burden of having to pay for a war, England became prosperous and in 1568 Elizabeth used money to increase the size of the navy. The new ships that were built were faster and easier to steer than before.

At the end of the year the English navy seized a treasure ship bound for the Netherlands, which was controlled by Spain. Philip II of Spain was very cross and relations between England and Spain worsened.

Philip was also annoyed that Elizabeth had restored Protestantism in England. His anger with England increased further after Elizabeth knighted Francis Drake. The countries of Europe had an agreement that there would be free trade between them, Drake, however, preferred to trade privately and Philip saw Elizabeth’s knighthood of him as an insult to the free trade agreement and began to prepare for war.

After the Protestant leader of the Netherlands, William of Orange, was assassinated, Elizabeth provided Drake with a navy of 25 ships and told him to harass Spanish ships. The English sailor did as he was asked and took Spanish possessions from Colombia and Florida. Philip retaliated by seizing all English ships in Spanish ports.

Elizabeth allied England with the Protestant Dutch states who wanted freedom from Spain and sent an English army to assist them.

Philip made plans for a fleet of 130 Spanish ships to block the Channel and allow the Duke of Parma to invade England.

The Armada set sail from Lisbon on May 28th 1588 but encountered storms and was forced to put in to the port of Corunna to make repairs. It was July 1588 before Philip’s Armada was ready to set sail again.

The Armada under the control of Medina Sidonia, reached the western approaches to the English Channel. Warning beacons were lit all along the South Coast and the English navy was put to sea.

The English defending fleet, commanded by Lord Howard of Effingham, included ships captained by Drake, Frobisher and Hawkins. Effingham sailed in the ‘Ark Royal’, which had been built for Raleigh in 1581, while Drake captained ‘The Revenge’. However, instead of concentrating all his resources in the straits of Dunkirk as Philip had thought he would, Effingham stationed a large contingent at Plymouth to shield the south-west coast from a direct landing.

The story is told that Drake was playing a game of bowls when the Armada was sighted, but insisted on completing the game before setting sail.

Many of the Armada’s Captains favoured a direct assault on England, but Medina Sidonia’s orders strictly forbade this. The fleet therefore sailed on from the Lizard to Calais to meet the Duke of Parma. However, on reaching Calais, the Duke of Parma was not to be seen. The Armada dropped anchor to await his arrival.

Route taken by the Spanish Armada.

At midnight, Howard sent eight fire ships into the congested Spanish ranks. Many Spanish Captains cut their cables in their haste to escape the flames. They blundered away from the blaze straight into the gunfire of the waiting English. Unfortunately for the Spanish, their fire power was vastly inferior to that of the English.

A change of wind blew the Armada North out of the range of English fire. However, the wind became a gale and the Spanish were driven further North and many were dashed on the Northern rocks. The survivors were forced to make their way round the Orkneys and down the Irish coast. The remains of the proud Armada limped home to Spain. 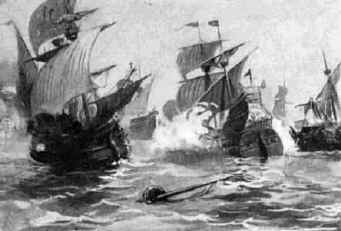 The defeat of the Armada may not have been due to the superiority of the English. Examination of cannon balls found on the bottom of the North Sea has shown that Spanish cannonballs were not all the same size. Different sizes of gun required different sizes of cannonballs. It has been suggested that the Spanish ships were not equipped with the right cannonballs for the guns on board their ships and were therefore unable to fire on the English ships that attacked them. They therefore chose to retreat, possibly to the Netherlands. The high winds prevented them from reaching port and dashed the ships against the rocks of northern Scotland.