The War of the Roses History

History » The Tudors » The War of the Roses History 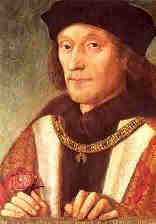 The War of the Roses history is a story of Tudor monarchs desperately attempting to unite a faction behind them large enough to unite the fledging realm of England. Henry VII (1457 – 1509) was the first Tudor monarch. His claim to the throne was not strong and he became king after defeating Richard III at the Battle of Bosworth Field in 1485.

The wars were called the Wars of the Roses because the Yorkists were represented by a white rose and the Lancastrians by a red rose.

Background to the Wars of the Roses

Although there were no battles fought until 1455, the cause of the wars dates back to the reign of Edward III and the power struggle between his sons after his death.

The four eldest sons of Edward III (1312 – 1377) were Edward the Black Prince (heir to the throne), Lionel of Antwerp (Duke of Clarence) John of Gaunt (Duke of Lancaster) and Edmund of Langley (Duke of York)

Edward III died in 1377. His eldest son, Edward, the Black Prince had died of the plague in 1376 and so his grandson, Richard, aged ten and son of the Black Prince, became king. Because Richard II was only ten years old, his uncle, John of Gaunt, Duke of Lancaster, ruled the country. As Richard grew older he rebelled against his uncle and made decisions that were not popular with the most powerful men in the country.

In 1399 John of Gaunt died and Richard II confiscated the land he had owned. John of Gaunt’s son, Henry, raised an army and when Richard surrendered took the throne as Henry IV. Richard was imprisoned in Pontefract castle and mysteriously died in February 1400.

Henry IV faced a number of challenges to his place on the throne because he was not the natural successor to Richard II. With the death of Richard II, the crown should have passed to Edmund Earl of March, great grandson of Lionel Duke of Clarence. However, Henry managed to keep his place on the throne and when he died in 1413, the country was at peace and his son, Henry V, succeeded without problem.

Henry V was a strong leader and after ordering the execution of Richard, Earl of Cambridge for plotting to put the Yorkists on the throne, invaded France. He won many battles, including the Battle of Agincourt in 1415 and conquered Normandy and Rouen for England. In 1420, Henry married the daughter of the king of France and it was agreed that their children would be the heirs of both England and France. When Henry V died in 1422 from dysentery, his son, Henry VI became the only king to be crowned king of England and France.

Henry VI was four months old when he became king and his father’s brothers ruled England and France in his place. France was soon lost when Joan of Arc raised an army against the English and restored the French monarchy. As Henry grew older it became apparent that he was a weak king, totally dominated by his French wife Margaret of Anjou. He was also prone to bouts of insanity and the Yorkists began plotting to take his place on the throne.

The first battle of the Wars of the Roses took place at St Albans on 22nd May 1455. The Yorkists led by Richard Duke of York easily defeated the King’s army. Henry VI was injured and taken prisoner. In 1455, Henry suffered another bout of insanity and Richard Duke of York was made protector of England. In 1456, Henry recovered and retook the throne. There were further battles and in 1459 Richard was killed at the Battle of Wakefield.

In 1461, Richard’s son Edward, Earl of March, defeated the King’s army, took the King prisoner and made himself King Edward IV. Queen Margaret took her son and fled to Wales where they were taken in by the king’s half-brother Jaspar Tudor. In 1470, Henry regained the throne but in 1471 was defeated by Edward’s army at the Battle of Tewkesbury and taken prisoner. Henry’s son, Edward, Prince of Wales was killed during the battle. With no other Lancastrian heir to challenge him, Edward IV remained king until his sudden death in 1483.

Edward IV had two sons, Edward and Richard, both of whom were too young to rule and so their uncle Richard Duke of Gloucester ruled England. The two princes were taken to the Tower of London and in the summer of 1483 mysteriously disappeared. It is believed that their uncle murdered them. Richard was crowned Richard III. He was not a popular king and faced many challenges to his place on the throne, notably from Henry Tudor, grandson of Owen Tudor who had been second husband to Henry V’s wife Katherine of Valois.

Henry Tudor raised a Lancastrian army against Richard Iii and at the Battle of Bosworth Field in 1485, Richard was killed and the Yorkists defeated. It is told that Henry found Richard’s crown on the battlefield and placed it on his head. Henry VII was crowned king and married Edward IV’s daughter, Elizabeth of York a move that was to end the Wars of the Roses.