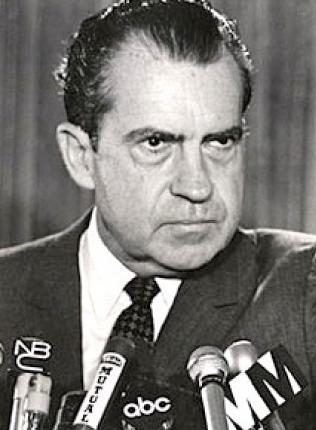 Richard Nixon left the White House over 40 years ago, yet he remains embedded in American pop culture like no other ex-president. He was the body-less leader of Earth in Futurama, the five-time president in Alan Moore’s Watchmen, and arguably the most awkward guest star in Laugh-In’s history.

Part of the reason is that he is thought to represent America’s political id: the dark, paranoid side of politics that keeps an enemies list and never forgives. After all, Watergate was the biggest political scandal of the 20th century, leading to the only presidential resignation in American history.

But what if Nixon was innocent?

That’s exactly the point that today’s guest, Geoff Shepard, argues. He was not an outsider to Watergate: Shepard joined John Ehrlichman’s Domestic Council staff at the Nixon White House, where he served for five years, first as a staff assistant and ultimately as associate director. He also worked on President Nixon’s Watergate defense team, where he was principal deputy to the President’s lead lawyer, J. Fred Buzhardt. In that capacity, he helped transcribe the White House tapes —which run 3,400 hours—ran the document rooms holding the seized files of H. R. Haldeman, John Ehrlichman and John Dean, and staffed White House counselors Bryce Harlow and Dean Birch.

Working from internal documents he recently uncovered at the National Archives, Shepard exposes what he calls judicial and prosecutorial misconduct that has remained hidden for four decades with his book, “The Real Watergate Scandal: Collusion, Conspiracy, and the Plot That Brought Nixon Down.”

He describes it as the following: an aging judge about to step down. Aggressive prosecutors friendly with the judge. A disgraced president. A nation that had already made up its mind. The Watergate trials were a legal mess—and now, with the discovery of new documents that reveal what he calls shocking misconduct by prosecutors and judges alike, Shepard says the wrongdoing of these history-making trials was actually a bigger scandal than the Watergate scandal itself.

The Real Watergate Scandal: Collusion, Conspiracy, and the Plot That Brought Nixon Down