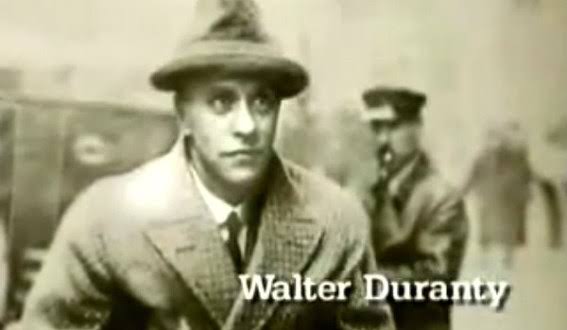 Walter Duranty was a New York Times reporter whom his greatest critics claim covered up Stalin’s crimes. He was part of an intellectual class spellbound by Soviet economic policy. Editor Oswald Garrison Villard, in a 1929 article called “Russia from a Car Window,” could hardly contain himself in his endorsement, despite speaking no Russian and never having met a Russian peasant: “This, I repeat, is the most stupendous governmental feat ever undertaken—the social, moral, political, industrial, economic emancipation of a people and its reorganization upon the basis of service to the society and to the nation, with the profit-making motive suddenly removed from the individual.” He was sure that “the minority which controls the destiny of Russia is on its way with extraordinary and completely unselfish devotion, with the fiercest determination to succeed at any cost.” To the charge that the Russian communists were fanatics he shot back: “Who else but fanatics would have the course for the task or could be relied upon to drive through to the end without essential compromise?” Such a task required something more than “timid or half-way reformers.” The Soviet dictatorship wasn’t really so bad, since the ruling party was “working for the good of the masses of the working people.”

Perhaps the most notorious figure in this context is New York Times reporter Walter Duranty, who covered up one of the greatest atrocities of the twentieth century.

Walter Duranty, desperate to maintain his access to Stalin, could consistently be counted on to portray the regime sympathetically. In November 1932, he claimed that “there is no famine or actual starvation nor is there likely to be.” In June 1933, with death everywhere in Ukraine, Duranty reported: “The ‘famine’ is mostly bunk.” In August he wrote that “any report of a famine in Russia is today an exaggeration or malignant propaganda.”

Malcolm Muggeridge, a British journalist who attempted to report the truth about the grisly events unfolding in Ukraine, later described Duranty as “the greatest liar of any journalist I have met in fifty years of journalism.” Muggeridge chose his words carefully. Duranty was no ignoramus. He knew full well the terrifying nature and scope of what was occurring, as we know from his own private comments to others. In one letter he estimated the number of deaths at seven million; in another he guessed ten million.

The Nation magazine praised Duranty in the early 1930s for composing “the most enlightening, dispassionate and readable dispatches from a great nation in the making which appeared in any newspaper in the world.” For The Nation, as for so many other American “progressives,” Stalin’s Russia was “a great nation in the making.” Duranty even won the Pulitzer Prize for his reporting from Russia in 1931.

Some people did manage to get the word out about what was happening in Ukraine. But when a paper with the prestige of the New York Times denied the existence of the famine, doubts remained. As Conquest explains, “This lobby of the blind and the blindfold could not actually prevent true accounts by those who were neither dupes nor liars from reaching the West. But they could, and did, succeed in giving the impression that there was at least a genuine doubt about what was happening.