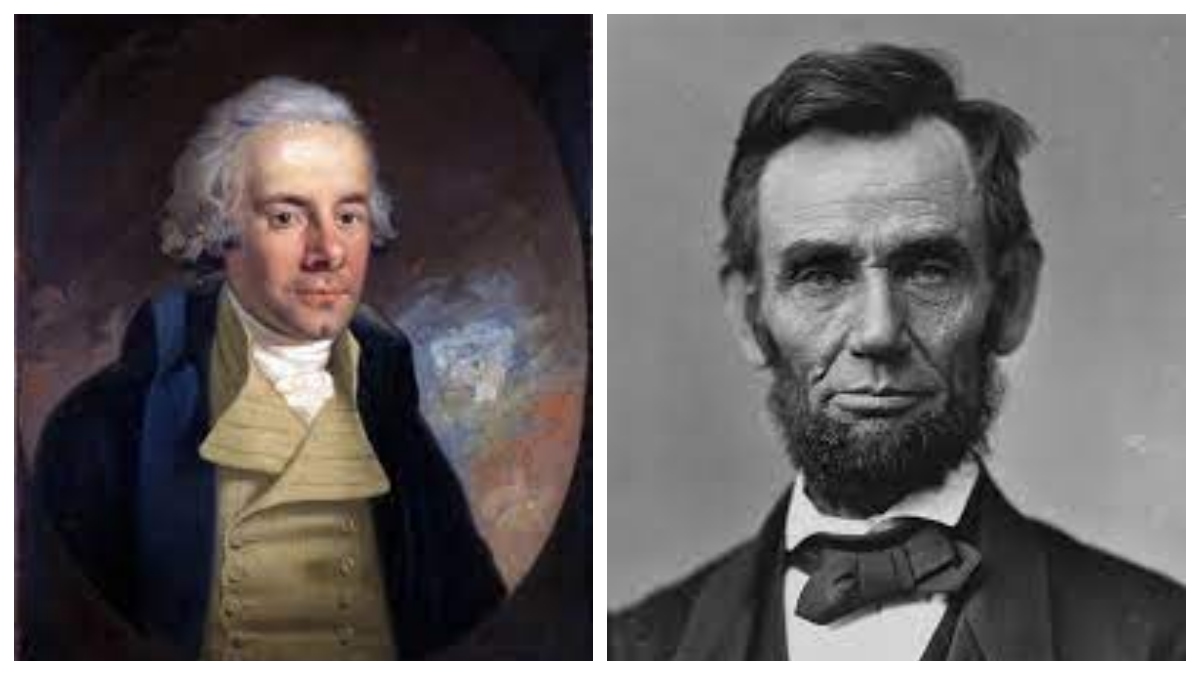 William Wilberforce was a massive presence in the noble fight against slavery.

Wilberforce was born in Hull, in the East Riding of Yorkshire, England in 1759 as the only son of Robert Wilberforce and Elizabeth Bird. William was a small, sickly child with poor eyesight, but this did not stop him from attending Hull Grammar School or taking part in musical activities or sports. William was known for telling funny stories and playing practical jokes. It was this manner of charisma that would serve Wilberforce greatly later on in life.

When William was only eight years old, his father died. William’s mother then became ill and so she sent him to live with his aunt and uncle, Hannah and William Wilberforce, in London. They sent him to study at a small boarding school in Putney, which he disliked, complaining about the food. Hannah and William were Evangelical Methodists and they took William to church regularly, where he enjoyed listening to bible stories and sermons by prominent figures within the Methodist movement.

It was in 1776, that a 17-year-old Wilberforce, now independently wealthy owed to the deaths of several of his family members, attended St. John’s college in Cambridge.

One thing that became clear about the young Wilberforce was his social expertise. He filled the bulk of his days living what could be called a rather hedonistic lifestyle with the days filled with drinking and gambling, often to excess. Wilberforce’s wit and conversational nature were on full display.

It would, however, be difficult for the member to parliament-to-be to regret these days entirely as it was during this time when the jovial and friendly shadow to William Pitt was cast.

William Pitt the Younger, as he was known, would go on to become the youngest prime minister in Great Britain at the age of 24. Pitt the Younger (so named because his father of the same name was himself a prominent member of parliament), would prove to be a lifelong friend and influential figure in the life of Wilberforce.

According to Brittanica.com, In 1780 both he and Pitt entered the House of Commons, and he soon began to support parliamentary reform and Roman Catholic political emancipation, acquiring a reputation for radicalism that later embarrassed him, especially during the French Revolution, when he was chosen an honorary citizen of France (September 1792).

In spite of his lifestyle and lack of interest in studying relative to Pitt, Wilberforce did indeed pass his examinations and received a BA in 1781 and an MA in 1788.

In 1780, Wilberforce became a member of parliament for Kingston-Upon-Hull, later representing Yorkshire, both in the House of Commons.

Humanprogress.org reports that In 1785, Wilberforce traveled to Europe with his sister and mother for a vacation. During his time abroad, he read Rise and Progress of Religion in the Soul.

This book had a profound impact on Wilberforce’s life. He embraced evangelical Christianity, lost interest in card games and drinking, began to get up early to read the Bible, and decided to commit his future life to work in the service of God. Thereafter his political views were guided by his faith and his desire to promote Christian ethics. Thus began his lifelong concern with social reform.

It was in 1787 that Wilberforce participated in founding the “Society for Effecting the Abolition of the Slave Trade, later known to us historically as the Anti-Slavery Society. Wilberforce and his associates—Thomas Clarkson, Granville Sharp, Henry Thornton, Charles Grant, Edward James Eliot, Zachary Macaulay, and James Stephen—were first called the Saints and afterward (from 1797) the Clapham Sect, of which Wilberforce was the acknowledged leader.

In the House of Commons, Wilberforce was a noted and influential sponsor of antislavery legislation. In 1789 he introduced no less than 12 resolutions against the slave trade and gave what many newspapers at the time considered among the most eloquent speeches ever delivered in the Commons.

The resolutions were supported by Pitt (who was by then prime minister), Charles Fox (often an opponent of Pitt’s), and Edmund Burke, but they failed to be enacted into law, and instead, the issue was postponed until the next session of Parliament. In 1791 he again brought a motion to the House of Commons to abolish the slave trade, but it was defeated 163 to 88.

In 1792 Wilberforce, accompanied by the support of hundreds of thousands of British subjects who had signed petitions favoring the abolition of the slave trade, put forward another motion. However, a compromise measure, supported by Home Secretary Henry Dundas, 1st Viscount Melville, that called for gradual abolition was agreed and passed the House of Commons, much to the disappointment of Wilberforce and his supporters.

Effect On The Slave Trade

Brittanica.com went on to report that for the next 15 years, Wilberforce was able to achieve little progress toward ending the slave trade (in part because of the domestic preoccupation with the war against Napoleon). In 1807, however, he finally achieved success: on February 23 a bill to abolish the slave trade in the British West Indies was carried in the Commons 283 to 16, accompanied by a chorus of hurrahs for William Wilberforce. It became law on March 25.

His death came just three days after the Abolition of Slavery Bill in the British Colonies was passed by parliament, freeing all enslaved people in these places. Just before he died, Wilberforce was visited by his old Clapham Sect friend, Thomas Babington Macaulay, who told him the news of the passing of the abolition bill. Wilberforce is reported to have said:

‘Thank god that I should have lived to witness the day in which England is willing to give 20 million sterling for the abolition of slavery.’

Within hours of his death, over a hundred high-profile figures, including the Lord Chancellor, wrote to request that William Wilberforce be buried in Westminster Abbey in recognition of his achievements.

According to abrahamlincoln.org, Lincoln encouraged Americans to look beyond politics and persevere in a good fight for a noble cause. With this speech he positioned himself within the international struggle over slavery, citing the example of British abolitionists William Wilberforce and Granville Sharpe. Lincoln’s stark imagery subliminally links supporters of slavery with darkness and historical oblivion.

But I have also remembered that though they blazed, like tallow-candles for a century, at last, they flickered in the socket, died out, stank in the dark for a brief season, and were remembered no more, even by the smell—School-boys know that Wilberforce, and Granville Sharpe, helped that cause forward; but who can now name a single man who labored to [slow it down]?