As the population of America grew, so people began to move away from the cities and towns onto the Plains.

At first the Indians welcomed the settlers; it was their belief that the land should be shared. However, problems soon began.

The whites killed buffalo so there was not enough for the Indians, then they began to take over land that had always been used by the Indians. The whites also brought disease with them. A simple cold could make and Indian very ill and some even died.

Settlers, looking for new places to live and gold seekers travelled across the Plains in wagons. They tried to force the Indians off the land. The Indians had no choice but to fight back.

Missionaries tried to convert the Indians to Christianity, they believed that this was the right thing to do because the Indians were superstitious savages.

The whites believed that their way of life was the only true way to live. Indian culture was different and so in the whites eyes was inferior. They thought that because the Indians couldn’t build proper houses they were less intelligent. They believed that by teaching the Indians to speak English they were doing the natives a great favour. 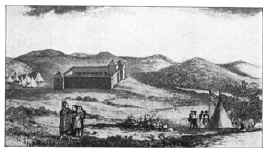 American treaties with the Indians, such as the Fort Laramie Treaty of 1868,  which were made to settle differences, were always broken by the whites.