History » The Egyptians » Ancient Egyptian Food: Dining Like a Pharoah 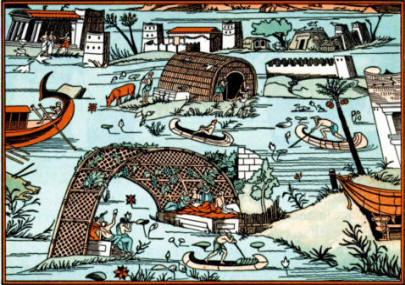 Ancient Egyptian food is surprisingly diverse considering the arid landscape from which it came. Although Egypt is a hot, desert country where the lack of water makes it difficult to grow crops and raise animals, the annual flooding of the river Nile (inundation) between the months of June and September made the Nile Valley one of the most fertile areas of the ancient world.

When the river flooded, mud and silt was deposited onto the surrounding area. This soil was rich and fertile and made good farming land. The main crops grown were wheat and barley.

Wheat was made into bread which was one of the main ancient Egyptian foods eaten by both rich and poor ancient Egyptians. The picture (right) shows the bread-making process.

First the grain was made into flour. It was then made into dough with water and yeast which was placed into a clay mould before being cooked in a stone oven. 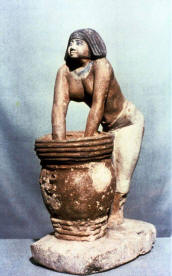 Barley was used to make beer. The barley was combined with yeast and made into a dough which was part-baked in a stone oven. It was then crumbled into a large vat, mixed with water and allowed to ferment before being flavoured with dates or honey. Recent evidence suggests that barley malt may also have been used in the process.

Beer was drank by both rich and poor.

Wine made from grapes, pomegranates and plums was enjoyed by the rich.

Ancient Egyptian Food For the Wealthy 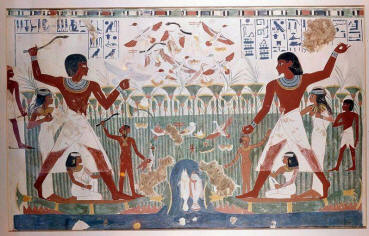 The picture (above) shows ancient Egyptians hunting for fish and birds in the reeds that grew on the banks of the Nile.

Meat, fish and poultry was roasted or boiled. It was flavoured with salt, pepper, cumin, coriander, sesame, dill and fennel.

Meat, fish and poultry that was not eaten quickly was preserved by salting or drying.

A variety of vegetables were grown and eaten by the ancient Egyptians including onions, leeks, garlic, beans, lettuce, lentils, cabbages, radishes and turnips.

Fruit including dates, figs, plums and melons were eaten for dessert.

A Comprehensive Guide to Ancient Egypt