History » The Aztecs » Aztec Education: Learning at Home and School 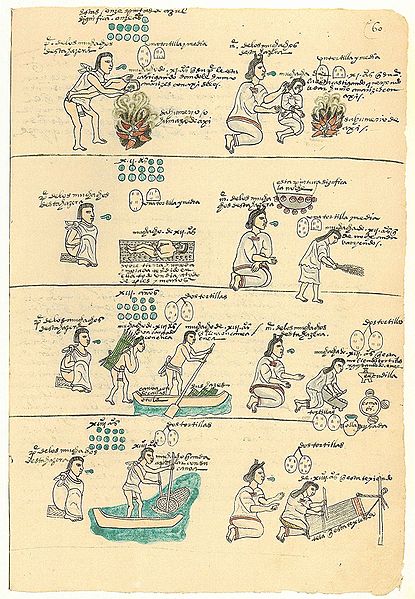 Aztec education was quite sophisticated compared to contemporary empires in the Eastern and Western Hemispheres. The Aztec Empire is one of the few older civilizations that featured mandatory education at home and in schools. Every child was educated, no matter his or her social status, whether noble, commoner or slave. Two different schools taught the young—one for the noble class and one for commoners, although bright, talented commoners might be chosen for advanced learning at the noble school. Children’s Aztec education, however, started at home with their parents. From age four or five, boys learned and worked with their fathers at a trade or craft, farming, hunting and fishing. Girls learned from their mothers all the tasks they would need in running a household.

All children were taught a large collection of sayings called the huehuetlatolli, which incorporated Aztec ideas and teachings. The Aztec culture expected well-behaved people so children were taught to be humble, obedient and hardworking. The huehuetlatolli included many sayings on all aspects of life, from welcoming newborn infants to the family to what to say at the death of a relative. Every few years, the children were called to the temple and tested on how much they had learned of this inherited cultural knowledge.

For the first 14 years of life, boys and girls were taught at home by their parents. After that, the boys attended either the noble school, called a calmecac, or the commoners’ school, the telpochcalli. Girls went to a separate school, where they learned household skills, religious rituals, singing and dancing or craftwork. Some talented girls were chosen to be midwives and received the full training of a healer. Other athletically talented girls might be sent to the house of dancing and singing for special training.

Much of Aztec society was divided into calpullis, a group of interrelated families, somewhat like a neighborhood or clan. Each calpulli had its own schools, both calmecac and telpochcalli. Boys and girls attended the schools run by their calpulli.

Calmecacs were schools for the sons of nobles, where they learned to be leaders, priests, scholars or teachers, healers or codex painters. They learned literacy, history, religious rituals, calendrics, geometry, songs and the military arts. These advanced studies in astronomy, theology and statesmen ship prepared the nobles’ sons for work in the government and temples.

Telpochcalli taught boys history and religion, agricultural skills, military fighting techniques and a craft or trade, preparing them for a life as a farmer, metal worker, feather worker, potter or soldier. Athletically talented boys might then be sent on to the army for further military training. The other students would, after graduation, be sent back to their families to begin their working life.